The Daily Northwestern • May 8, 2020 • https://dailynorthwestern.com/2020/05/08/campus/congressman-ro-khanna-speaks-to-college-democrats-at-virtual-meeting/ 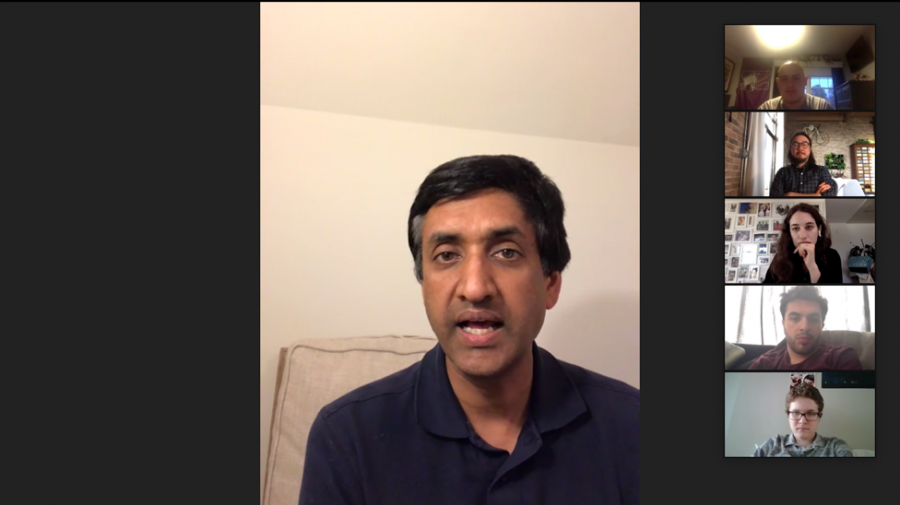 Khanna, who represents California’s 17th district, is currently drafting an Essential Workers Bill of Rights with Sen. Elizabeth Warren (D-Mass.) and Rep. Tim Ryan (D-Ohio). Due to his busy schedule, Khanna only had 30 minutes to speak with students, instead of the full hour participants had expected.

Still, the congressman managed to cover topics ranging from the federal stimulus package to the upcoming presidential election. He began by explaining his current stimulus proposal, which would provide $2,000 each month for the duration of the crisis to households earning less than $250,000 annually.

“If the government is saying you can’t work because that puts us all at risk, then it’s our obligation to at least help people make basic expenses during that period,” Khanna said.

When asked how they came up with the $2,000 total, Khanna said that sum is only the “bare minimum” to allow individuals to pay rent and buy essential goods. He said essential workers should receive hazard pay to compensate for the additional risk they’re forced to take right now.

The Q&A was moderated by sociology Prof. Anthony Chen, with the option for students to write their questions in Zoom’s chat section.

Weinberg junior Adam Downing, who serves as College Democrats’ Director of Programming, said it was a “great privilege” to hear from Khanna.

“He very easily could have canceled,” Downing said. “He could have said, ‘The world’s on fire right now, I need this time to write life-changing legislation,’ but he still held true to his responsibility. To us, that’s massive.”

Former College Democrats president Romie Drori asked about modifications to the 2020 presidential election, such as online voting or complete postponement.

Khanna acknowledged certain changes would need to be made but warned a full postponement would mean “playing into the president’s hands.” Instead, Khanna said states should focus their attention on vote-by-mail and make a commitment to provide enough resources in order to make such alternative methods feasible.

Khanna also lamented the lack of public health and manufacturing infrastructure in the United States, noting that there needs to be greater investment going forward in the Centers for Disease Control and Prevention and the World Health Organization, as well as greater transparency between countries. To that end, he said news agencies need to prioritize facts and eliminate the dissemination of false information.

“A lot of people are bringing their own biases to the science,” Khanna said. “It’s a big challenge.”

Khanna has been serving in the House of Representatives since 2017, and he is currently running for his third term in office. He backs the Green New Deal and Medicare for All and is a member of both the Congressional LGBT Equality Caucus and the Transgender Equality Task Force.

Khanna was the first speaker in the College Democrats’ May Speaker Series. Next week, participants will hear from Marie Newman, who recently defeated 15-year incumbent Dan Lipinski in a narrow Democratic primary to represent Illinois’ 3rd Congressional District.

“I think it’s kind of cool and intimate,” College Democrats president and McCormick sophomore Ayesha Prashanth said of the new Zoom format. “I was definitely a little worried, but it’s worked out really well.”