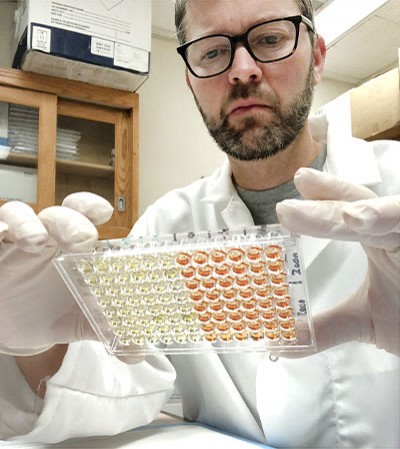 A team of Northwestern faculty and researchers have taken another step towards fighting the COVID-19 pandemic, developing a new method for testing SARS-CoV-2 antibodies that requires only a single drop of blood from a finger prick.

According to a Wednesday news release, the method would provide an at-home testing option for individuals to determine whether they’ve had prior exposure to a virus, regardless of whether they had symptoms. The team reported the new test in a paper on MedRxiv, the preprint server for health sciences, the release said.

Known formally as serological testing, antibody testing works to determine the levels of IgG antibodies in the blood, which increase approximately 14 days after infection and can remain detectable for several months. Through these tests, the release said, researchers and policymakers can determine how the virus is spreading throughout communities.

“As the first waves of infection subside, antibody testing is necessary for ascertaining the true prevalence and mortality rate of infection and for evaluating how effective policies such as social distancing or closing schools and restaurants are working to prevent viral transmission,” anthropology Prof. Thomas McDade, the director of the Laboratory for Human Biology Research, said in the release.

While antibody tests are useful for determining prior exposure to the virus, current approaches are significantly limited in their accuracy and convenience. Early in the pandemic, NU researchers realized there were “important gaps” in the current approach to antibody testing, the release said, and assembled a team of biological anthropologists, pharmacologists and scientific investigators.

They then began working on NU’s Evanston and Chicago campuses to develop an accessible and reliable method for testing that wouldn’t require individuals to travel to a healthcare provider. This method would enable researchers to screen a much larger number of people and prevent any further strain on in-person testing sights.

“It is inexpensive, relatively painless and people can collect their own blood and send samples to the lab through the regular mail,” McDade said in the release. “By not requiring people to come into the clinic to have their blood drawn, we conserve clinical resources, keep people safe at home during shelter-in-place and greatly increase the potential reach of antibody testing.”

Moving forward, the team plans to test more samples to formally evaluate the sensitivity and specificity of their antibody test. They are additionally building a “web-based platform” to roll out antibody testing across Chicago, though the release did not specify when the researchers predict the test will be ready.

— Brainstorm: Unmasking the Research Behind COVID-19