The Daily Northwestern • May 6, 2020 • https://dailynorthwestern.com/2020/05/06/campus/education-department-strengthens-rights-of-students-accused-of-sexual-assault/ 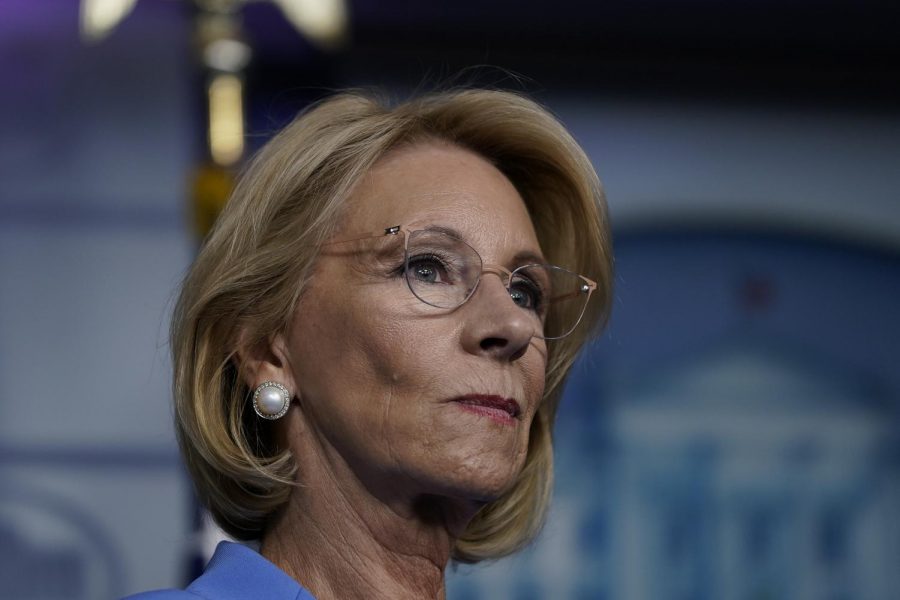 Secretary of Education Betsy DeVos at a briefing on the coronavirus pandemic in the press briefing room of the White House on March 26, 2020. The Department of Education announced today new rules regarding Title IX on college campuses.

The rules, issued Wednesday by Education Secretary Betsy Devos, will go into effect on Aug. 14, and finalize the Trump administration’s rollback of Obama administration guidances that sought to fight sexual violence on campus.

Devos announced her initial proposals in Nov. 2018. Students and organizations responded around the country, including at Northwestern, where administrators and students submitted comments calling for changes to the proposals.

Now, administrative investigations into sexual assault on college campus will include live hearings with cross-examinations of both the alleged victim and the accused perpetrator.

The department drew on previous Supreme Court rulings in defining sexual assault. Under the new rules, a sexual assault violation now constitutes “unwelcome conduct that a reasonable person would determine is ‘so severe, pervasive, and objectively offensive’ that it effectively denies a person equal access to education.”

Consistent with the Clery Act and Violence Against Women Act, the department clarified that a single instiance of sexual assault, dating violence, domestic violence or stalking also counts as sexual harassment.

“The Department has an interest in providing recipients with consistency and simplicity in understanding what is sexual harassment for which the school must take responsive action,” the regulations said. “A multiplicity of definitions would not serve this purpose.”

The definition marks a return to a 2001 guidance that said a consistent definition of sexual harassment used in both judicial and administrative enforcement is appropriate.

In drafting the rules, the department noted that an institution of higher education differs from the workplace, and that applying the same definition of sexual harassment would “broaden the scope of proibited speech and expression,” potentially leading colleges and universities to infringe upon the First Amendment rights of students, teachers and faculty.

“Workplaces are generally expected to be free from conduct and conversation of a sexual nature, and it is common for employers to prohibit or discourage employees from engaging in romantic interactions at work,” the regulations said. “By contrast, it has become expected that college and university students enjoy personal freedom during their higher education experience, and it is not common for an institution to prohibit or discourage students from engaging in romantic interactions in the college environment.”

Title IX, which bars gender discrimination in federally-funded schools, has been historically handled through Dear Colleague letters, documents from the Education Department that aren’t legally binding.

In 2011, the Obama administration issued one such document — rescinded in 2017 by Devos — which broadened the definition of sexual harassment and increased the degree to which schools might be liable for such violations.

These new rules serve, in part, as an attempt to codify more recent guidance from the Education Department — guidance, the department noted, that went unheeded by many colleges and universities, being legally non-binding.

Sage Carson, the manager of Know Your IX, a national survivor- and youth-led project of Advocates for Youth, said in a press release that by implementing this final rule, Devos ignored the more than 100,000 submitted comments urging her to rescind the prior recommendations.

“The final rule makes it harder for survivors to the report sexual violence, reduces schools’ liability for ignoring or covering up sexual harassment, and creates a biased reporting process that favors respondents and schools over survivors’ access to education,” Carson said in the release. “All this as students struggle to find housing, keep up with online classes, and pay rent as the unemployment rate soars.”