The Daily Northwestern • May 5, 2020 • https://dailynorthwestern.com/2020/05/05/sports/swimming-wildcats-translate-competitive-mindset-to-new-terrain/ 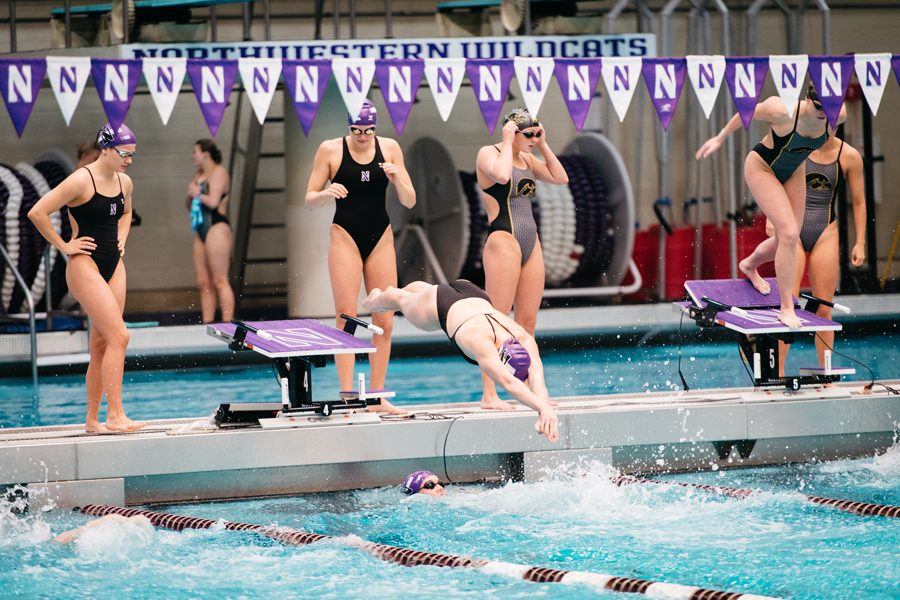 A Northwestern swimmer leaps into the water. With swimming pools not a training option for most of the team, the Wildcats have found alternative means to continue working out.

On the afternoon of March 12, Miriam Guevara was contemplating her travel plans and dreading the swimming team’s long drive to the NCAA Championships in Athens, Ga. with her teammates, three of whom were seniors preparing for their first trips to the national meet.

Minutes later, the sophomore had to contemplate the premature end of her season.

“It was really emotional because we knew how much work we had put in the season,” Guevara said. “For swimming, you rest for your final meets because that is when you’re supposed to perform and drop time, so that made it a bit harder for us. We worked so hard the whole season, and then the final step was taken away.”

In the weeks since the NCAA called off all events in the wake of the coronavirus outbreak, Guevara and the rest of Northwestern’s swimming and diving team have had to make a major adjustment to their plans — finding ways to train for a sport which has seen its lifeblood, the swimming pool, cut off.

Coach Jeremy Kipp said the athletes have adapted to the disruption by translating their workouts to a new terrain. For the Wildcats’ swimmers, the change includes integrating cross-training activities such as Peloton biking, running and using rowing machines to keep up cardiovascular fitness, while the divers are focusing on technical analysis of top professional divers.

“With swimming and diving, this is probably the longest that any of our swimmers have been out of the water since they were probably 10 years old,” Kipp said. “We haven’t been in the water for a good six weeks now. Most of our athletes take a break, a two-week break at the end of the season, maybe three weeks in summer, but never for this long. In terms of training we’ve had to be creative and really rethink how we’re doing things.”

Communication has become an essential component to NU’s training. Kipp holds team meetings on Tuesdays and Thursdays, then divides athletes by class into breakout rooms for deeper discussions to build the team environment and develop the Cats’ competitive mindset for next season.

Athletes have also stayed engaged through group activities, with Guevara pointing to the women’s team’s handstand and abs challenges as ways she and her teammates have bridged the geographical gap.

Despite the challenges posed by the remote Spring Quarter, Kipp sees his athletes making the most of the unique circumstances.

“Most of us are focused on doing the right thing publicly, taking care of our public responsibility,” Kipp said. “Training is more a break for our sanity and our health at this point. Talking to a lot of the athletes, I know they miss that daily grind, and I think when they get back in the water, they’ll be really hungry. You don’t know what you love until it’s taken away from you.”