The Daily Northwestern • May 5, 2020 • https://dailynorthwestern.com/2020/05/05/sports/mens-basketball-starting-with-julian-roper-northwestern-begins-building-its-2021-recruiting-class/ 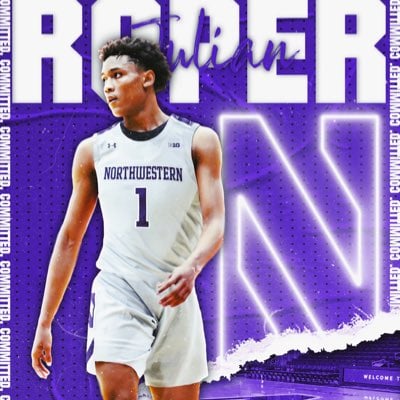 After committing to play college basketball for Northwestern on Monday, Julian Roper started sifting through congratulatory messages. Eventually, he saw one from Tamar Bates, one of the top high school point guards in the country.

Bates’ message said, “Congrats.” Roper responded, “Now you know where to be my guy!”

Northwestern, of course, is the place Roper wants Bates to be.

Roper is a junior at Orchard Lake St. Mary’s High School in Franklin, Mich. On Monday, the three-star shooting guard ranked No. 136 in his class by 24/7 Sports became the first player to join the Wildcats’ 2021 recruiting class.

The day Roper announced he’d spend his college career at Northwestern, he was already trying to help make his recruiting class even stronger.

Roper admitted he knew little about Northwestern’s basketball team just two years ago. He knew the school had great academics, but he said he didn’t know anything about the program Collins was trying to build.

Northwestern’s coaches attended several of Roper’s high school games and built a strong relationship. Eventually, they convinced him to take an unofficial visit in August, followed by an official visit in October.

“After the official visit, I started to see Northwestern as one of my top prioritized schools,” Roper said.

Roper closely watched the Wildcats go 8-23 last season and 3-17 in Big Ten play. But he was impressed to see Collins give so much responsibility to freshmen and sophomores. That intrigued Roper, a score-first guard hoping to play a major role the day he steps on campus.

The Michigan native had options to play college basketball closer to home or for higher-ranked programs like Wisconsin or Ohio State. But Roper says he always felt like a priority when he spoke with the Wildcats’ coaches.

Roper was certainly a priority for Northwestern and is currently the seventh-highest ranked recruit in program history. Roper averaged 18.3 points and 7.6 rebounds for one of the best teams in Michigan, and he’ll enter his senior season as a candidate to win the state’s Mr. Basketball award.

Northwestern still wants more from its 2021 class. Even after the Wildcats watched two highly sought-after 2021 targets –– Luke Goode and Caleb Furst –– commit elsewhere, Collins is working to make the 2021 recruiting class the best in Wildcats history.

Roper is trying to help with that. He’s spoken several times with Bates, a 6-foot-4 guard from Kansas City, Kan., ranked 98th in his class by 24/7 Sports. Bates has offers from Kansas, Creighton and several other power-conference schools, but Bates told The Daily in February that he had Northwestern on his list.

Bates is friends and former teammates with guard Ty Berry, an incoming freshman at Northwestern. Bates had a virtual visit with Northwestern’s coaches on April 17.

The Wildcats are also pursuing Jaden Akins, a four-star guard ranked No. 99 in the 2021 class. Akins and Roper are both from Michigan, and they’ve grown especially close after visiting Northwestern together in October.

Collins and Borovich attended a few of Akins’ games during the season, and now Roper is helping out with the recruiting.

After Roper committed to Northwestern on Monday, he messaged Akins, “Join us!”

Akins has been offered by Xavier, Michigan and Michigan State, and he’s reportedly one of the Spartans’ top targets in the 2021 recruiting class. Despite the significant interest, Akins told The Daily that Northwestern still stands out to him in certain areas.

“The biggest difference in Northwestern is the feel that they give you,” Akins said. “That home feeling when you get on campus. They made me feel welcome and wanted, they said to keep believing in their program, they have some good young guys, and they’re trying to build on that.”

Roper hasn’t been in touch so far with Patrick Baldwin Jr. and Max Christie, two five-star recruits who have said they’re interested in playing for Northwestern. But even though he hasn’t spoken with them, Roper said he knows what adding those two players would mean to the program.

“I’ll probably get in touch since the coaches have definitely mentioned being high on them,” Roper said. “They’ve said, ‘If we can acquire (Baldwin Jr. and Christie), the vision that we have for the program could be in full drive.’ The 2021 class could go over the top if we can add those guys.”

Roper himself is a major acquisition for the Wildcats, giving Collins a versatile combo guard who can play alongside Boo Buie, Chase Audige or Berry in the backcourt.

“Coach Collins will be there for a long time, and the young players they have now will become a Big Ten-ready team,” Roper said. “They were young, so they had a lot of struggles last year. But the vision that I see clearly is Northwestern’s time will come.”