How Pritzker plans to reopen the state 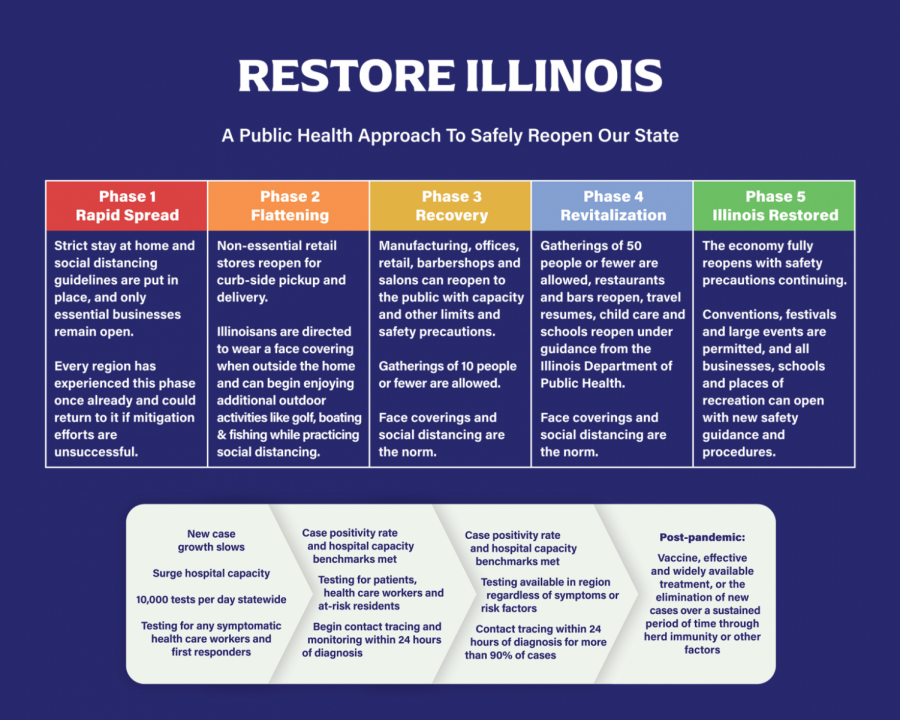 The plan, called “Restore Illinois,” divides the state into four health care regions. Regions will move through the phases independently, as they meet predefined public health benchmarks. Evanston belongs to the Northeast Illinois region, along with Chicago.

“We are one Illinois,” the governor said at his Tuesday press conference. “But we are also one Illinois made up of 60,000 square miles and reality on the ground looks different in different areas of our state.”

Pritzker said Illinois will only return to “normal”  in the final stage, when a vaccine or effective treatment becomes readily available or when there are no new cases over a sustained period. Until then, large conventions and festivals will remain canceled and face coverings will be the norm.

Pritzker said Illinois has already moved through phase one. Defined as the “rapid spread” phase, residents were ordered to follow strict social distancing guidelines and only essential business were allowed to operate.

The state entered phase two on May 1, when Pritzker implemented the modified stay-at-home order. All regions will remain in phase two through May 29. Nonessential stores can open for curbside pickup.

In order to enter phase three, infection rates, hospitalization rates, and the demand for ICU beds must decline or stabilize first. In this “recovery” phase, offices, retail and salons can reopen with capacity limits and safety precautions. Gatherings of fewer than 10 people will also be permitted.

In phase four, schools, restaurants and bars will reopen, under the discretion of the state health department. Gatherings of fewer than 50 people will be allowed.

In the final phase, the economy will fully open. Festivals and conventions will be permitted. On Tuesday, Pritzker expressed doubt the state could reach the final phase before midsummer festival Lollapalooza.

“We have to figure out how to live with COVID-19 until it can be vanquished,” Pritzker said. “Our first and best option is to rely on Illinoisans working together.”