The Daily Northwestern • May 4, 2020 • https://dailynorthwestern.com/2020/05/04/campus/coronavirus-consequences-recession-could-spell-long-term-losses-for-generation-z/ 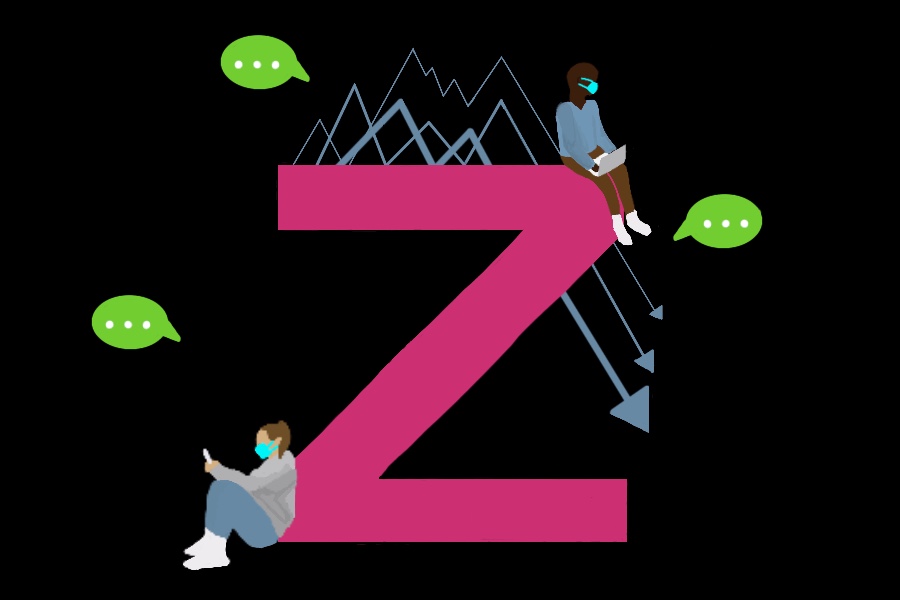 Alison Martin was being practical.

The Communication senior, a theatre major, knew how challenging it would be to break into film and television acting. So Martin began working as an event planner in Chicago, with plans to work three days per week in the spring while studying part time at Northwestern, saving up money and auditioning for roles on the side. She was looking forward to auditioning in New York and in Chicago through Northwestern’s senior showcases, meeting agents and getting some exposure.

With audition opportunities on the horizon and an event planning job secured, Martin’s senior spring was full of potential.

Instead, she’s found herself sitting in her parents’ basement.

“I (felt like) I had a backup plan. I was being so smart about it. I had this gig that will pay me really well and give me the flexibility to still audition,” Martin said. “Now, I’m like, oh, there’s nothing to audition for, because nothing can film, and no shows can go on because the audiences are too big. And there’s no events to plan right now.”

As is the case for many seniors, opportunities in Martin’s preferred field have dried up, either as a result of coronavirus-related shutdowns or the simultaneous economic collapse. As case numbers and unemployment statistics continue to rise, the abilities for smaller companies to hire new graduates shrinks, and starting salaries, even at larger companies, are likely to fall. As young professionals with relative inexperience, recent graduates are easily expendable.

With no quick medical fix in sight, political science Prof. Stephen Nelson said the labor market, especially for Generation Z members entering the workforce, will be tight — and extremely competitive.

Nelson forecasts unemployment rates likely hitting 30%, surpassing even the Great Depression. For current seniors about to graduate, the coronavirus-induced collapse creates a “grim” outlook, he said.

“People who might have had two job offers coming out of their undergraduate experience are now going to be applying to a huge number of jobs, competing with large numbers of other good candidates,” Nelson said. “Securing that position is going to be very difficult.”

The financial disadvantages of graduating into a recession are well-documented in social science research. In a 2019 study published in the Journal of Labor Economics, SESP Prof. Hannes Schwandt found that cohorts entering the job market during economic downturn suffer strong initial income losses, which persist well into a person’s career. Reduced earnings last about 10 to 15 years before salaries catch up to where they would have been had the person entered a strong job market. Typically, recession graduates work more, while earning less.

But Schwandt, who studies the intersection of economic and health outcomes, found that graduating into a recession can provoke adverse health results as well as financial ones.

The negative effects of graduating during a recession read like a list of side effects quickly mentioned at the end of a prescription drug ad — these unlucky members of Generation Z may experience lower long-term socioeconomic outcomes, lower earnings, lower rates of marriage and children, higher divorce rates, are more likely to die in middle age and have a higher risk of “deaths of despair,” such dying from a drug overdose.

When students graduate college and enter the workforce, they are at an impressionable age, typically 21 to 23, in which the formation of health behaviors can take root, Schwandt said. The stress and potential earnings losses makes a recession graduate more likely to form negative health behaviors than someone entering a growth-oriented market.

“These will be the moments when your life transitions very much,” Schwandt said. “Where you are really making your path and deciding which industry you work in, the first firm. This can, of course, have very important, long-term effects — for the rest of your life.”

Schwandt emphasized his findings are not predictive for any one person, and that because this recession was caused by an external factor, prospects for a strong recovery to pre-virus levels are good.

Still, he said current seniors, who, through no fault of their own, are simply the wrong age at the wrong time, are lacking options. They have fewer job opportunities available to them and lack a social safety net, as government-provided unemployment benefits are only available to people with a work history. Without protection, new workers will have to seek employment wherever they can find it, potentially creating inefficiencies in the economy where prospective employees and employers are not properly matched due to the restrictiveness of the labor market.

“Just because of a recession, a lot of people don’t start the trajectories that they would start in good times,” Schwandt said. “Firms are missing out. There’s a bunch of people who would be a really good fit for the activity of a firm. If you don’t hire them, they will do something a little different, for a different sector — they will not gain the expertise they would in normal times.”

Medill senior Ryan Coleman spent his winter applying to public relations positions at various NFL teams. He interviewed with several teams, receiving promises that they would get back to him near the end of March. But with uncertainty around the timing of the NFL season — or if it will happen at all — Coleman said no potential employers seem to be willing to make a hiring commitment.

Even for those who do find jobs, the effects could be similar to those seen in recessions in 2008 and 1931, according to Nelson, barring a medical breakthrough. With a tighter labor market, new graduates won’t be able to weigh offers against one another, depressing their wages until the economy is back on its pre-virus trajectory.

However, Nelson isn’t certain the economy will recover as soon as the virus is under control.The economy that eventually emerges — the one that first-years and sophomores will enter into — could look different.

With economic downturns and closures squeezing out smaller businesses, the “quasi-monopolies”— like Amazon or Facebook — big enough to survive a recession could dominate the market even further, suppressing labor mobility.

“If things continue on this track, there will be more industrial concentration,” Nelson said. “For people who don’t want to pursue skills that are valued by those firms, they’re going to have to think creatively. “

Nelson emphasized that monopolatization is not a natural phenomenon. That future could be avoided if people mobilize in support of public policies seeking to break up large companies.

‘Among the most privileged’

Tyler Ennis, a Communication senior, received a job offer from Boston Consulting Group in the fall, so he has avoided having to search for a job in the current market. But like Nelson, he believes the virus’ effects will last longer than one hiring season.

BCG has moved new employees’ start dates back, though Ennis, who is slated to start in January, has not been affected. But he assumes that until there’s a vaccine, consulting, which is very “people-focused”, will look different — no travel, no meetings at client sites. Ennis thinks he’ll be working from home for a substantial part of his first year of employment.

Even though the situation is stressful and he knows classmates are dealing with job uncertainty, Ennis said he believes students’ Northwestern degrees will insulate them from the worst of the potential outcomes. Schwandt’s research supports his view — high school graduates and college dropouts suffer even stronger and more persistent income losses than those with college degrees.

“We’re among the most privileged people in our age group,” Ennis said. “No matter which way we spin it, graduating from Northwestern is, in some ways, a shield protecting us from the adverse economic effects.”