The Daily Northwestern • May 3, 2020 • https://dailynorthwestern.com/2020/05/03/sports/lacrosse-northwestern-stays-connected-despite-seasons-premature/ 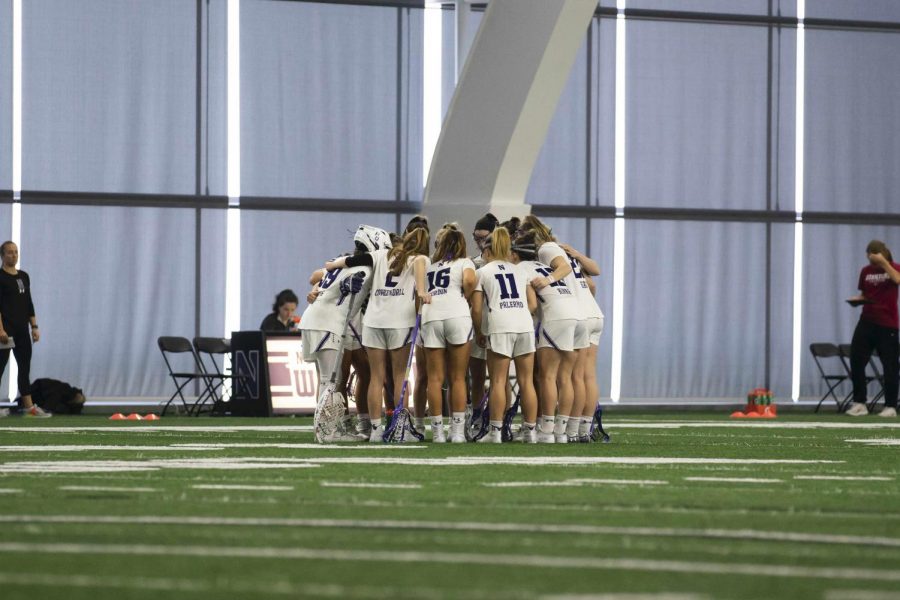 The Wildcats gather in a huddle. NU has been staying connected through Zoom calls, group workouts and TikTok challenges since their season was canceled on March 12.

Northwestern’s lacrosse season ended just as the Wildcats were on the verge of a breakthrough.

NU opened its season with a 30-goal performance, a single-game record since Kelly Amonte Hiller took over in 2002. After tough losses to Notre Dame and Syracuse, the Cats, in their last game of the season, lost to top-ranked North Carolina by only two goals, the closest margin the Tar Heels had defeated a team by all season.

Going into Big Ten play, NU was well-positioned to make a run at repeating its 2019 Big Ten Tournament championship. Instead, the same afternoon they were supposed to travel to Nashville for the conference opener against Penn State, the season was canceled.

For junior attacker Lauren Gilbert, the news was hard to process. Gilbert said the team practiced that morning, and found out just before they were supposed to leave for Nashville.

“After you had the meeting in the locker room, we realized that these could be the last moments that we were with each other,” junior defender Ally Palermo said. “We just tried to wipe the tears away and make the most of it. We went outside and did one last shooting competition, our ritual for every game. We just tried to have fun with it, and make the most of what was happening.”

Palermo said her initial reaction to the news of the season’s end was how much this means for the eight seniors, many of whom will not be returning next season. Palermo said she and some of the other juniors organized a virtual Senior Night with the whole team and made a video in their honor.

Gilbert said the video consisted of underclassmen speaking about their favorite memories with the seniors and what their class means to the team, and the coaching staff put together highlight videos for the shortened season. Athletic administrators and training staff also participated in their Senior Night Zoom call, she said.

The NCAA granted spring athletes an extra year of eligibility due to the season’s cancelation, but Northwestern has not yet announced which, if any, seniors will be returning for the 2021 season.

Sophomore goalkeeper Madison Doucette said the team has organized frequent Zoom meetings. The Big Ten placed a suspension on organized team activity until May 4, which prevents coaches from directly overseeing their training, so the junior and senior leaders organize weekly workouts and TikTok challenges to keep the team together and motivated.

“We see this as a huge time for growth and our coaches really emphasize how this is a chance to get a leg up,” Doucette said. “Everyone’s working, we have programs from our strength coaches, and we’re doing what we can with the different facilities. Some people have a ton of equipment, some people have nothing, so it’s really a matter of us being motivated and doing what we can.”

Gilbert said for the first two weeks upon their return home, the coaching staff gave them space and there wasn’t much team communication. Since then, she said the Cats have started looking toward next season, establishing the culture and leadership to create a foundation to build off of when they next play together.

Doucette said she thinks this experience will invigorate the team returning next season, and will help them appreciate the moments together. Palermo agreed, saying that going into next season, she’ll put a greater emphasis on being grateful for the moments she gets with her teammates.

“Next year, we can’t just say we’re grateful,” Palermo said. “We really have to take every moment, and give it our all because we don’t know when it can be taken away from us. I think a lot of teams will come in with the same mentality. We have to use it as an edge, and work just as hard, if not harder than all the other teams who are also playing for something that they lost.”

Related Stories:
– Connected While Apart: Despite season’s early end, Northwestern softball as tight-knit as ever
– NCAA, Big Ten cancel all athletic competition until the 2020-21 school year
– NCAA grants all Division I spring-sport athletes option for an extra year of eligibility