The Daily Northwestern • May 3, 2020 • https://dailynorthwestern.com/2020/05/03/campus/graduate-workers-hold-universal1yr-rally-on-international-workers-day-to-highlight-academic-worker-concerns/ 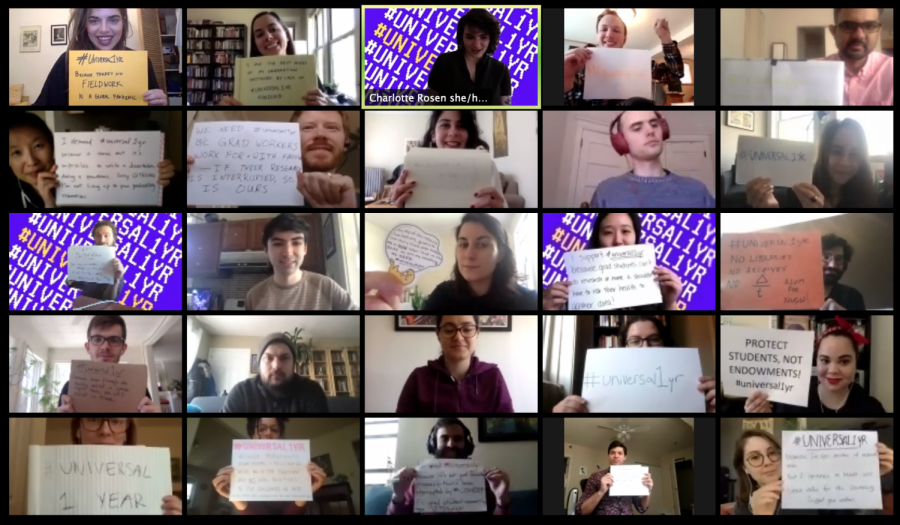 At the Zoom rally, participants held signs on why the University should provide an additional year of funding

The sit-in, which occurred throughout the day, was accompanied by an online rally at noon. It marks just some of NUGW’s advocacy since campus closed. On March 28, NUGW published a petition pushing for an additional year of funding and other COVID-19 related relief measures.

The demands were followed by an April 16 “tweetstorm,” with the campaign hashtag, #universal1yr, which trended in Illinois. But now, NUGW has a bigger base. A network of university professors, lecturers and workers have signed off on a statement of academic solidarity, supporting academic compensation and equity and promising to refuse speaking events, workshops and conferences.

Participants in Friday’s action were instructed to photograph themselves holding signs that stated why people should support universal funding, then post the testimonials on Twitter.

Watch until the end – 0 lies detected. @NorthwesternU @TGSatNU why are you upholding a logic of white supremacy????? #universal1yr NOW pic.twitter.com/ty68sa9CnQ

I support #universal1yr because graduate students work hard for our students, research, and universities. I want my school to support me as much as they support this photo of me. 💪🏿✊🏿 pic.twitter.com/UDVAxzjWGX

I am a Chem Grad Worker at @NorthwesternU . My grandma died from #COVID19 at Mt. Sinai Hospital in NYC on April 21. I postponed my qualifying exam to grieve w/ my family. I am not the only one mourning – WE NEED #universal1yr NOW – @TGSatNU @WeinbergCollege @NorthwesternGW pic.twitter.com/Q5qTGTl6FJ

Anna Zalokostas, NUGW’s chair of the unity committee, gave opening remarks at the rally, which was attended by around 75 people.

“The fact is that Northwestern, like Harvard, like Yale, like universities everywhere, (is) in a fine position to weather the economic crisis that COVID-19 has precipitated,” Zalokostas stated. “Do not let (University) President (Morton) Schapiro tell you otherwise.”

In an April 16 email to the Northwestern community outlining the ways the coronavirus has hampered funding, Schapiro wrote the University will work to “protect the endowment,” as it provides a strong fiscal foundation.

But the implied austerity and prioritization of the endowment, Zalokostas said, is not to save money but to “conserve power.” She additionally told the audience that through teaching, research and other types of duties, graduate students contribute significantly to Northwestern’s academic status and operations”

Alícia Hernàndez Grande, a Ph.D. candidate at Northwestern, said that doing graduate work and taking care of her young daughter full-time during a pandemic has been taxing.

Hernàndez Grande said she doesn’t want to extend the Ph.D. timeline, and that she is “ready to move on.” She added she is still at the mercy of a job market that has been harmed by COVID-19.

Like Hernàndez Grande, graduate student Zorimar Rivera Montes said the expectation to continue teaching and research during a pandemic has been a burden. Rivera Montes said she cannot go to the library to access materials or travel to Puerto Rico to conduct fieldwork.

The student said she came to the University from Puerto Rico during an economic crisis there, and added the University and U.S territory government’s responses were similar.

“This University which is extremely wealthy and has (billions of dollars of) endowment is using the same austerity measures that the Puerto Rican government used,” Rivera Montes noted. “I refuse the logics of austerity that pit us against each other.”

Rivera Montes, who is a first-generation college student, said graduate students’ individual pay, which the University may not consider to be a large amount, can mean a lot to the recipient. Facing a volatile job market, she noted, the University should provide funding and support to graduate students who depend on academic pay.

Closing out the rally, Charlotte Rosen, chair of the communications committee, criticized the University’s praise of academic achievements during the pandemic.

“This pandemic is not a writing retreat, this pandemic is not an opportunity to ‘be more productive,’” Rosen said. “The fact that the university is suggesting as much is callous and woefully ignorant toward the many ways the coronavirus has disrupted our lives and especially how it will have a disproportionate impact on graduate workers who are already marginalized and underserved (by the University.)”

Correction: A previous version of this story incorrectly stated Puerto Rico was a country, rather than a U.S. territory. It further stated Rivera Montes was an international student. The Daily regrets the errors.