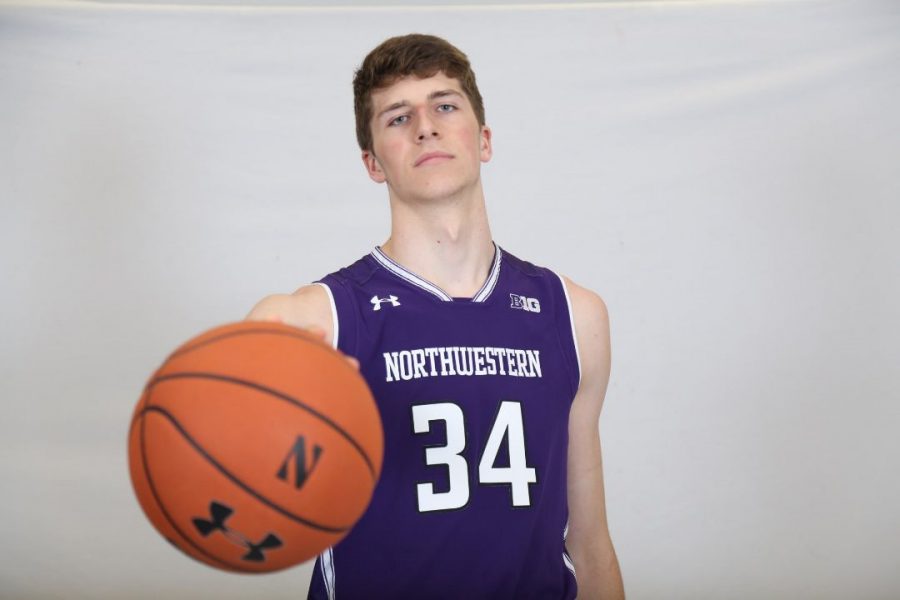 Matt Nicholson poses in a Northwestern uniform. The Michigan native will be the Wildcats’ first seven-foot player since 2016 when he joins the team this fall.

Two years ago, Matt Nicholson was riding the bench for Clarkston High School as the Wolves competed for the Michigan state championship. With just over a minute remaining and Clarkston comfortably ahead, the sophomore was given the opportunity to play out the rest of the game, and he took advantage of it.

Nicholson finished with two points, two blocks and two rebounds, which he jokingly referred to as a “triple-double.”

Since that state championship, the seven-foot center became a standout for Clarkston, receiving offers from Creighton and the Toledo, as well as a preferred walk-on offer from Michigan State. He committed to Northwestern last September, which he said was the clear choice after visiting campus.

“There’s times where every day you have a phone call and get to talk to this coach or that coach,” Michael Nicholson, Matt’s older brother, said. “I could just see the enjoyment on his face.”

Family has always been a priority for Nicholson, and his family had a strong influence on his decision. Michael was also a standout at Clarkston, and he went on to play college ball at Division II Lake Superior State, where he excelled as a scorer and rebounder.

Michael coached Matt in AAU ball, and is the head JV coach and an assistant varsity coach at Clarkston. During Nicholson’s senior year, Michael primarily coached his brother, teaching him the post techniques he learned as a college player.

“Most of my success is because of him,” Nicholson said. “He paved the way for me. He was the one who made a name for me to follow after.”

As an upperclassman at Clarkston, Nicholson surpassed his brother’s accomplishments. After playing behind Wisconsin forward Taylor Currie and Michigan State big man Thomas Kithier as a sophomore, Nicholson emerged as a leader in his junior year, helping the team to an 18-3 record.

His senior year was even better — Nicholson was pegged as a “seven-foot block machine” by Detroit Post Productions. While his size comes with challenges, like finding pants and fitting in his twin bed, it has also allowed him to dominate on both sides of the ball, leading Clarkston to a 21-1 record and No. 2 state ranking by MLive. The Wolves’ only loss came at the hands of St. Mary Prep, led by Wisconsin commit Lorne Bowman.

Nicholson had a number of outstanding performances in his senior year, netting 20 points, 11 rebounds and seven blocks against Pontiac and recording 10 blocks and 12 points against North Farmington.

Although the season was cut short due to the coronavirus pandemic, Nicholson believes Clarkston had a shot at the state championship, saying the Wolves had all the pieces in place.

Moving forward, Nicholson will look to compete with Ryan Young for the starting center position for the Wildcats. The seven-footer will be the tallest Northwestern player since Alex Olah graduated in 2016.

Robbie Beran, a freshman forward at NU, spent time with Nicholson on both of his campus visits. He says he believes Nicholson will have no problem fitting in with the team.

“Some guys will come on campus arrogant and cocky,” Beran said. “He wasn’t that. I think he’ll fit in seamlessly.”

As he prepares to start his collegiate career, Nicholson has high hopes for NU despite the Cats’ recent struggles, saying he wants to help bring them back to the NCAA Tournament.

In the 2019-20 season, NU finished 13th in the Big Ten with a 8-23 record. The Cats’ 2017 NCAA Tournament appearance is the only one in school history. But with the additions of Nicholson and three-star guard Ty Berry, NU will go into next season with nine of its top 25 all-time recruits, including four of its top six, according to 247Sports.

For Nicholson, though, his decision to come to Northwestern is about much more than basketball — it’s about planning for his future.

“The great education that you have is unmatched,” he said. “It’s going to set me up perfectly for something after basketball, and that’s one of the main reasons why I picked Northwestern.”

Nicholson has spent his entire life watching Big Ten basketball. The Michigan native has family ties to both the Wolverines and Spartans; both of Nicholson’s sisters attended Michigan State, and his father went to Michigan. That family history makes Nicholson especially motivated to play against those schools, he said.

Michael, a Michigan State fan, said it will be tough to decide who to cheer for when his brother takes on the Spartans. But he has high expectations for Matt, who he said will work hard to prove he belongs in the Big Ten.

“It’s actually great motivation because Michigan and Michigan State didn’t offer me (a scholarship),” Nicholson said. “You guys have a big target on your back now. You didn’t show interest, so I’m going to make you pay for it.”

Related Stories:
— Men’s Basketball: Matt Nicholson is going to be a Wildcat
— Northwestern men’s basketball gets another 2020 recruit in guard Ty Berry