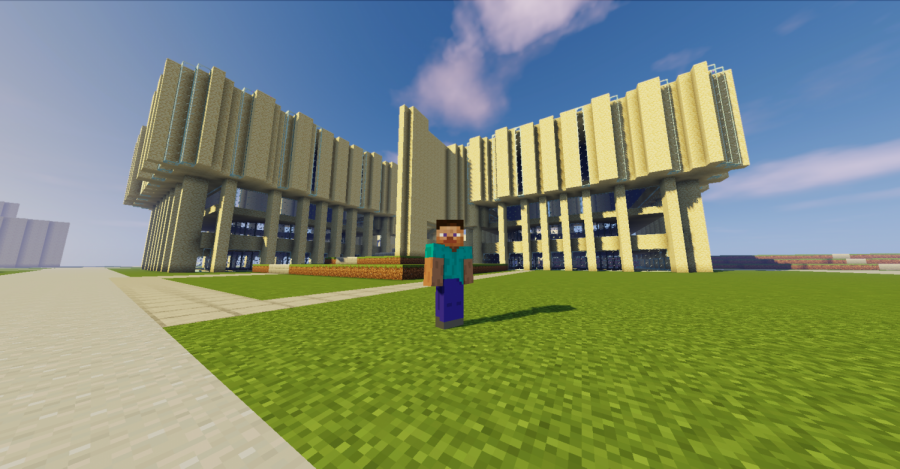 (Screenshot taken from the Minecraft map)

A screenshot of the Northwestern University campus on Minecraft. Structures such as Main Library, Norris University Center and the Weber Arch are a few of the sites that can be accessed on the virtual campus.

With Spring Quarter classes underway, Northwestern students are engaging virtually outside of Zoom calls and lectures by building relationships on Minecraft (literally).

With the announcement of campus closures across the country due to COVID-19, students have taken their on-campus experiences online. Students at The University of Chicago, UCLA, MIT and others have recreated well-known campus landmarks and buildings on Minecraft, a multiplayer virtual space in which users can create their own worlds.

Inspired by the trend, McCormick sophomore Robert Norwood said he set up his own server and resurrected a downloadable Northwestern University map that was posted on Reddit eight years ago. After sharing the server IP address in the “Northwestern Memes for Technically Top Ten Teens” Facebook group on March 19, the existence of the online campus spread through various tags and comments, attracting over 443 unique logins to the map.

Main Library, Norris University Center and the Weber Arch are a few of the sites that can be accessed on the virtual campus. The process of importing the pre-existing structures and adding other buildings and features took approximately two hours, Norwood said.

For Norwood, it’s nice to be able to meet up with friends he can’t see right now.

“I think a lot of people are definitely missing campus, missing having that community,” Norwood said. “I know I am.”

Moving towards adding more buildings and hosting player versus player games on the map is all dependent on user interaction and interest, Norwood said.

Some students have gone to the lengths of hosting meetups in Main Library. The virtual campus has even brought new players to Minecraft.

Having played only a few times before, Weinberg junior Fiona Asokacitta said her goal was simple: walk around and hopefully not starve to death — which can happen at varying speeds in Minecraft depending on the user’s amounts of food and activity. Asokacitta said she ultimately took the unconventional route of trapping her virtual self in Annie May Swift Hall.

“It sounds silly but it is helpful,” Asokacitta said. “It can honestly be a useful surrogate for social interaction and also you get to meet a lot more random people on there. You don’t know who is going to log in the Minecraft server with you.”

Finding new ways to interact in the age of social distancing, she said her peers are engaging through other various games such as Club Penguin and Animal Crossing.

“Naturally, people wanted to replicate the experience of being on campus, and the campus is what connected us,” Kanda said. “So to create that somewhere online that many people have access to, I think Minecraft was a really natural option to do that.”