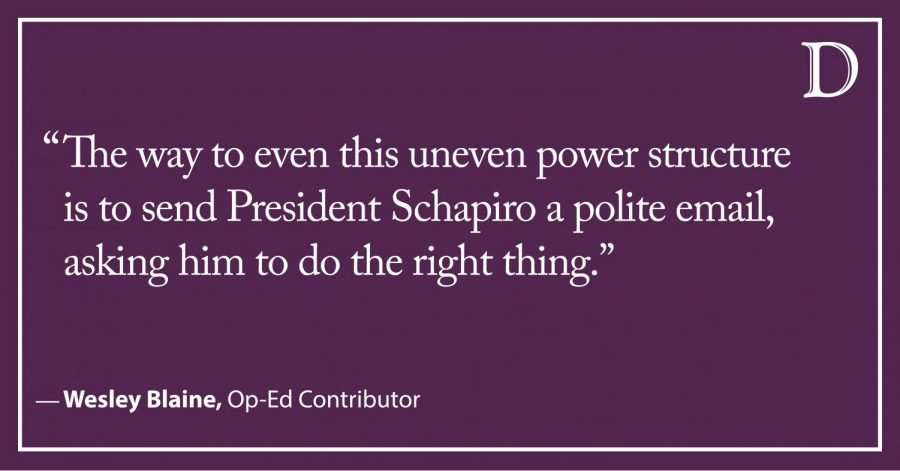 A week before Spring Quarter began, I logged into my CAESAR account to pay my tuition, and was surprised by what I discovered: I was charged full tuition even though the first week of class had been canceled. It seemed unfair that I was being billed 100 percent of tuition for 90 percent of class instruction.

I felt that if I reached out to NU’s finance department they would see their error and offer me (and possibly you too) a 10 percent refund.

A nice gentleman in NU’s finance department answered my call. He said that many students had called about this situation but that there was nothing he could do about it. He recommended that I contact my department head, and possibly Northwestern’s administration, for help.

I emailed my department head, President Morton Schapiro and the chairman of Northwestern’s board of directors, J. Landis Martin. I mentioned that 10 percent of our classes had been cut weeks ahead of time due to COVID-19, and that it seemed fair to offer a 10 percent reduction in our tuition.

The head of my graduate school organized a Zoom meeting to address questions from students. When my question entered the queue, she said that reducing tuition was above her pay grade.

I felt this was ironic, because my counseling program encourages students to seek social justice. It also teaches us that we have an ethical responsibility to always do what is best for our client. I wonder if our leaders have done everything they can to right this social injustice. I wonder if they were putting our interest before their own.

Mr. Martin’s assistant got back to me. He said that Mr. Martin had nothing to do with tuition at Northwestern, and that I should direct my questions elsewhere.

Kathleen Hagerty, Northwestern’s interim provost, responded for President Schapiro. She said that “tuition is based on the amount of credit attempted, not the number of individual meetings within a term … and we are not reducing the amount of credit awarded based on a slight reduction in the length of the term.”

I wrote back. I said that charging us by credit assumes that Northwestern is delivering the instruction that we are paying for. That is not the case.

“Thanks for your email,” Kathleen wrote back. “I certainly don’t mind students writing to us about their current frustrations. We all know that nothing is how anyone had hoped it would be and everyone is having to make some very hard choices about how to get through this.”

I was curious about Northwestern’s finances. A part of me felt like our University was strapped for cash, which could also explain why they would charge us full tuition for 90 percent of instruction.

To resolve this question, I examined Northwestern’s tax documents since Northwestern is classified as a 501(c)(3) not-for-profit.

The kicker is that Northwestern pays no tax on these “profits,” which is one of the generous perks of being a nonprofit. The irony here, at least to me, is that while many attack Google, Facebook, Apple and Amazon for their corporate greed and offshore tax sheltering, Northwestern pays $0 in tax on billions of dollars in “profits” in Illinois. This feels scandalous, since Illinois consumers pay exorbitant sales tax, property tax and living expenses. It also indicates that Northwestern is not strapped for cash. They are swimming in it.

Northwestern charges undergraduates $18,744 a quarter in tuition. Graduate students pay $18,689. There are approximately 22,000 students at Northwestern. If each student received a 10 percent refund on Spring tuition, that could potentially put millions back into our pockets.
Those millions can seem unimaginable, but appear to be peanut shavings to a University that earns $1.1 billion of tax-free “profits” every four years.

So then, if Northwestern has billions of dollars of tax-free “profits” stockpiled in bank accounts and interest accruing investments around the world, and if a 10 percent refund to students is a pithy amount for our University, then why is the administration unwilling to give us a 10 percent refund on Spring tuition?

I don’t know. But refunding 10 percent of our tuition is the right thing to do. It’s not the easy thing to do, or what will boost the administration’s year end bonuses, but good leaders do what is right even when that does not serve them well.

I encourage you to politely email President Schapiro, asking him to do the right thing and sign the petition on Change.org that has been set up for Northwestern students too.

Sending polite emails and signing the Change.org petition may not help. But we must try something because leadership is about behavior, not titles. If our leaders don’t embody this, then we can.

Wesley Blaine is a graduate student in Northwestern’s counseling program. He can be contacted at [email protected] If you would like to respond publicly to this column, send a Letter to the Editor to [email protected] The views expressed in this piece do not necessarily reflect the views of all staff members of The Daily Northwestern.