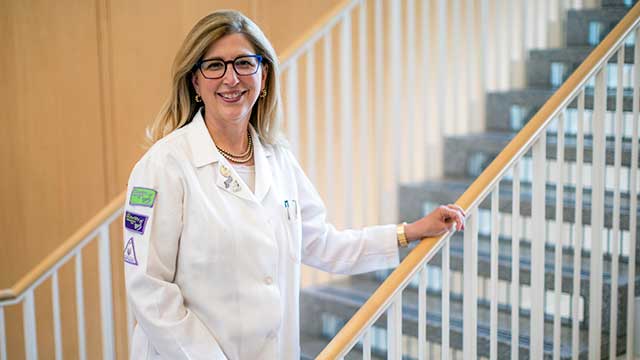 Teresa K. Woodruff. Having been selected as Michigan State University’s provost, Woodruff’s last day as dean of TGS will be May 31.

Michigan State has selected Teresa K. Woodruff, Northwestern’s dean of The Graduate School, to be its next provost, Associate provost Kathleen Hagerty said Monday in an email to the Northwestern community.

The decision, effective Aug. 1, marks the end of Woodruff’s more than 25-year career at Northwestern. More information on plans to find her successor will be shared in the coming days, Hagerty said, and Woodruff’s last day as dean of TGS will be May 31.

“We owe her a debt of gratitude for her many years of service to the University and wish her nothing but success in her new role,” Hagerty said in the email.

Woodruff has been dean of TGS since September 2017. Since then, she has implemented a program review of The Graduate School and its functions. During her time as dean, graduate students have scaled up unionization efforts.

In 2017, Northwestern University Graduate Workers successfully campaigned for five full years of guaranteed funding. The union has most recently launched a #universal1yr Twitter campaign to demand an additional year of funding and support to graduate students in the midst of the coronavirus pandemic.

In early March, CoalitionNU, a then anonymous group representing marginalized and underrepresented students of TGS circulated a letter, petitioning the University to remove and replace Woodruff and increase funding and staff for the TGS Office of Diversity and Inclusion.

An internationally recognized expert in ovarian biology and reproductive science, Woodruff established a national team of scientists, educators and policymakers to translate her research to the clinical care of women who, as a result of cancer treatment, will lose their fertility.

Woodruff also spurred the National Institutes of Health to create a policy requiring sex to be considered a biological variable in basic science and preclinical research. Woodruff also founded Northwestern’s Women’s Health Research Institute, where as co-director she has pushed for sex and gender inclusion in scientific research.