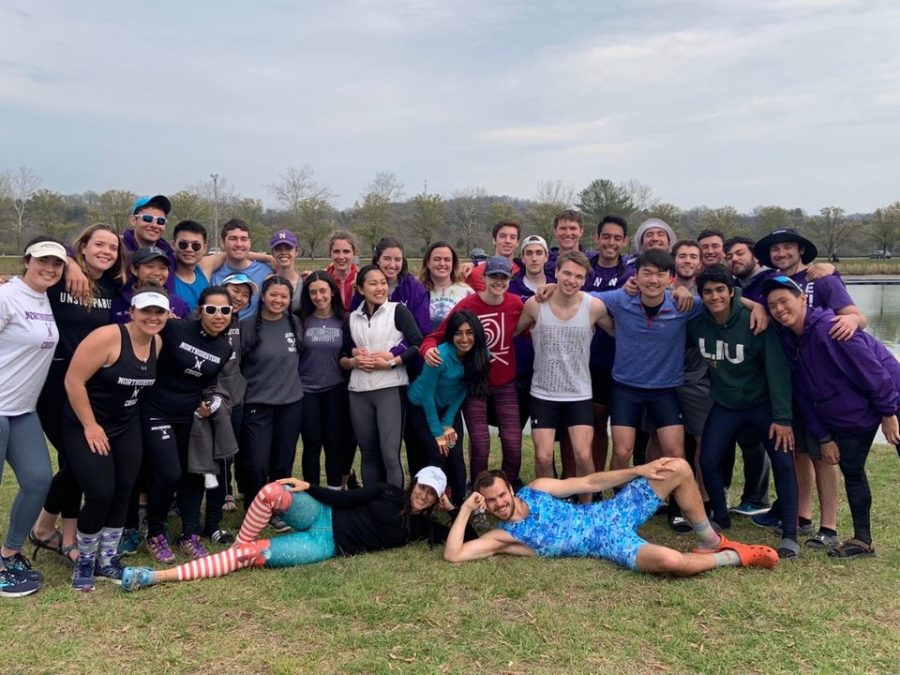 NU Crew. The club didn’t get a chance to have its spring season because of COVID-19.

The spring season was looking especially bright for Northwestern’s club rowing team. After welcoming a new coaching staff in the fall, the winter season of training put some rowers in the best shape of their lives. The spring schedule had more races than any of the past few years.

“Really having that momentum going into the spring — it was just really upsetting to see that go when everything got canceled,” club president and McCormick senior Charles Weiss said.

The week leading up to that announcement was a normal one for NU Crew. They’d practiced two hours each morning, and they were gearing up for their Spring Break training trip to Tennessee.

Some team members had suspicions that the season might be in jeopardy, so on March 13 — when the club had a 7 a.m. meeting in Tech in lieu of practice — people knew what was coming.

Weiss, alongside the coaches, announced that the trip to Tennessee was canceled and that as long as Northwestern didn’t have classes, they couldn’t practice.

“It was just silence in the room,” Weinberg senior Elizabeth Perkins said. “We knew it was coming, but we didn’t know what to think about it. People were distraught, especially the seniors.”

Weiss said it was difficult watching the expressions on his teammates’ faces as he delivered the news, but he also tried to use the moment as a rallying cry for underclassmen.

He reminded them that the seniors put in a lot of work to get to this point and won’t be able to show it, so the underclassmen should continue that work and be ready for when they can next row.

At that point, when NU had only committed to remote learning for three weeks, there was a chance for the club to resume practice if campus reopened and prepare for their last meet of the season. But, soon enough, that race itself was canceled and NU then switched to online classes for the rest of the year.

Weinberg freshman Aaron Zheng said he was disappointed that he didn’t get to compete with the team and only had the chance to practice on rowing machines.

“The hardest thing when we were told is knowing that our first year basically was spent rowing ergs indoors,” he said. “It’s my first (season), so there’s more to look forward to. It’s just hard knowing that one year of training is — not wasted — but the opportunity is more or less gone.”

Zheng added that he’ll miss the close friends he’s made on the team.

He said he especially enjoyed meeting a few other teammates in the Willard lobby and walking to the bus up to Henry Crown Sports Pavilion together during the winter mornings.

“In the mornings when it’s freezing out and we’re standing there for three or four minutes waiting for the bus, it’s bad at the time,” Zheng said. “But being back home and all, you really miss it.”

But even while the club is scattered across the globe, they’re all staying in touch. The team has had a few Zoom calls, communicated over Snapchat and GroupMe, and even started a book club.

They’ve also entered an at-home workout competition with rowing teams at the University of Chicago and Case Western Reserve University, where members keep track of data including how many miles they run, how many meters they erg or how many squats they do.

Though this isn’t the season ending she would have preferred, Perkins said she has confidence in the club moving forward.

“It’s tough,” she said. “It’s my last chance to race with my teammates and to make memories and travel with the team and all of that. But I know that the team’s going to come back strong when we’re able to…. I’m excited for what the future holds.”