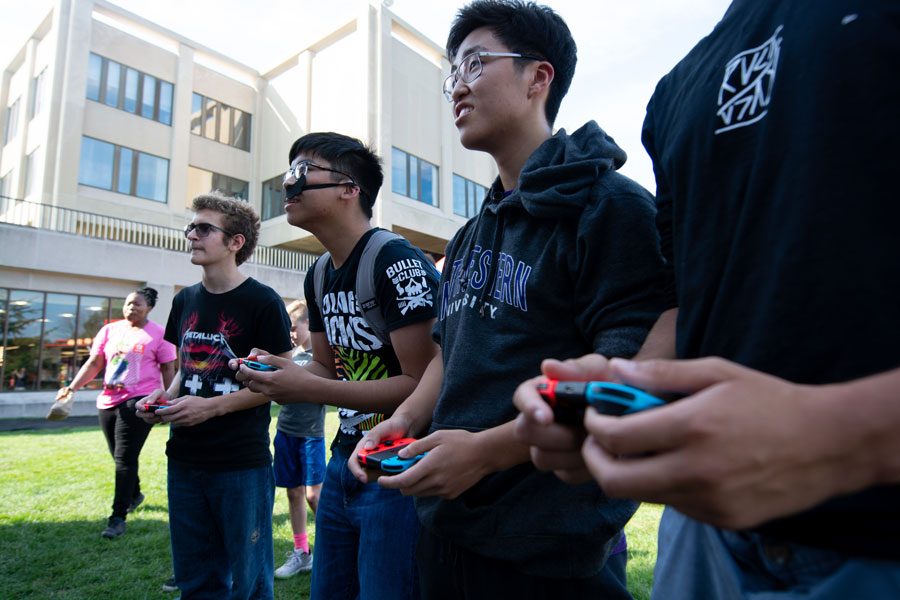 Gamers have fun at the Nintendo Switch: Together Tour kickoff. NU Recreation sent out an interest form last week for students interested in playing eSports, a form of competitive online gaming.

Students who planned to compete in intramural sports during Spring Quarter can now participate in eSport tournaments through Northwestern Recreation.

eSports is a form of competitive online gaming where organized groups face off in multi- or single-player gaming tournaments. Due to cancellations of spring sport tournaments, the staff at Northwestern Recreation said it was looking for interactive ways to engage students during this period of self-isolation, and sent out a survey on April 17 to gauge interest in eSports.

Close to 275 students responded to the survey within the first few days, which Ryan Coleman, associate director for competitive sports, said provided feedback and demonstrated interest in this new opportunity.

“The intramural sports that we run through the program… obviously, we can’t do that, we’re not on campus,” Coleman said. “So we’re just looking for ways to engage and connect students and thought eSports might be a good opportunity.”

While eSports has not previously been offered through Northwestern Recreation, the school’s eSports club has provided students with a “friendly forum” to discuss, practice and compete in various online games since 2014.

Noah Wolters, a McCormick junior and eSports club executive, said that the club is not affiliated with the efforts of Northwestern Recreation to form eSports opportunities for students.

“It is our hope that we (will) be able to facilitate a relationship with them to become a part of it,” Wolters said.

Although the club has been hosting weekly meetings in the Norris Game Room and offers several league options, including Super Smash Bros. and League of Legends, Wolters said, it has been struggling to gain recognition among students.

Wolters added the club has been trying to move toward getting recognition as a more legitimate organization and student group. He said those advances have been challenging, especially because their visibility is low.

While NU Recreation is starting from scratch to build a gaming community among NU athletes, Weinberg sophomore and eSports club executive Braden Svoboda said the eSports club sees this as a missed opportunity for cooperation between the two organizations.

“I feel like that is something that could be a really good spot to build a relationship between the eSports club and the athletic department,” Svoboda said. “It’s something that we could run and facilitate well because we have experience with it.”

In the meantime, the two remain separate. Northwestern Recreation plans to begin registration early next week for those who completed the initial survey. The eSports club remains open and encourages new participants to sign up through their website.

Svoboda said the diverse community has been his favorite part of joining the club. Being able to meet people from many different backgrounds, he said, was one of the best parts of being on campus.

“I’ve met most of my best friends through eSports club,” he said. “You really get to bond with people when you play video games. You think it’s just looking at a screen but you really form good friendships.”