Connected While Apart: Despite season’s early end, Northwestern softball as tight-knit as ever 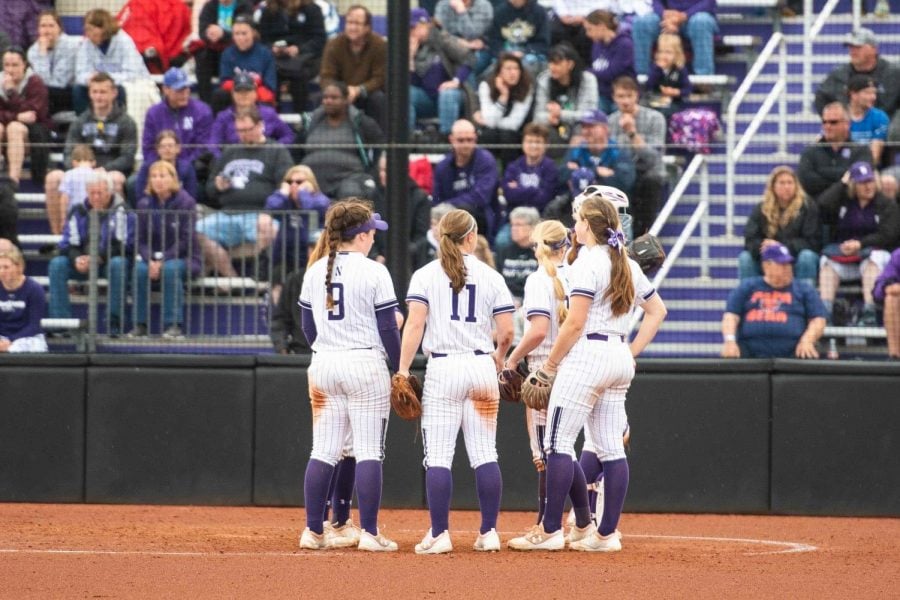 Northwestern’s infield gathers at the pitcher’s circle during a 2019 game. The Wildcats’ season ended after five weeks due to COVID-19.

Northwestern softball had returned home after five straight weekends of nonconference tournaments, eager to put a disappointing start to the season in the rearview mirror. But the Wildcats would never take the field for their home opener — which would have marked the start of Big Ten play.

The NCAA canceled all winter and spring championships on March 12 due to COVID-19, and NU, which was coming off its best season in more than a decade in 2019, was denied a chance to repeat that success.

“With the amount of travel we had been doing, we’d been really paying attention (to coronavirus) and being diligent with our team as far as taking precautions,” coach Kate Drohan said. “We were on 10 flights to five different states… We were all pretty surprised because everything had happened so quickly. There were some tears, there was some shock, a lot of people giving each other support.”

Within a week, nearly the entire team had returned home to shelter in place and prepare for the remote Spring Quarter. But the Cats have remained in constant contact even while dispersed across the country. NU is doing two team-wide Zoom calls per week, plus smaller meetings for position groups and some one-on-one sessions, Drohan said.

The players also have their own group chats, junior second baseman Rachel Lewis said, and the Cats are still finding ways to have fun with each other despite not being in physical contact.

Junior third baseman Mac Dunlap and sophomore center fielder Skyler Shellmyer, among others, have helped make funny videos to post on Twitter. These videos have featured players throwing balls and other items to each other across screens, dancing along to their walk-up songs and pulling softball equipment out of their refrigerators.

“We’ve been trying to keep everyone involved and connected,” Dunlap said. “Whether that’s sending a short video pulling something random out of a refrigerator, or throwing a ball. It’s something we need, especially during this time, to maintain the friendships and relationships we’ve spent months building.”

Dunlap said creating the videos has been difficult but manageable, with coordinating across time zones being the biggest challenge. Lewis said senior outfielder Emma Bartz made a “Jeopardy!” game last weekend for the team to play together, with the clues containing fun facts about the players.

The Big Ten has suspended organized team activities through at least May 4, meaning coaches cannot organize workouts for the time being. But Lewis said the athletic department mailed all student-athletes a medicine ball, a kettlebell and some resistance bands so they can keep training on their own.

“We’re trying to keep moving as much as we can,” Lewis said. “We weren’t supposed to be having a break for another couple of months. A lot of people have stuff at home, whether it’s dumbbells or barbells or bands, so we’re making do with what we have.”

Drohan said she tries not to worry about anything out of the team’s control, including whether the Cats’ four seniors — including graduate pitcher Kaley Winegarner, who is in her fifth season with the program — decide to return for the extra year of eligibility the NCAA has granted them.

Athletic Director Jim Phillips has said NU will support all spring-sport seniors who wish to come back, but some may not have the financial resources to do so or have postgraduate plans lined up already.

“A lot of things are out of our control,” Drohan said. “For us to be grateful for what we have, the fact that we’re healthy, we have our families, they can continue to focus on academics. Having a good perspective on the big picture right now will be key.”