The election must go on: How ASG is holding its presidential election during a remote quarter 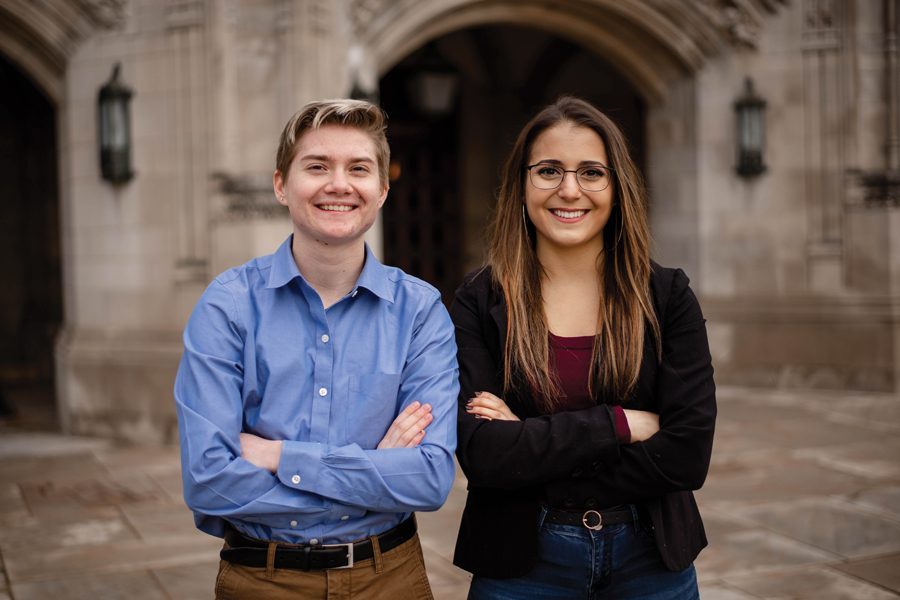 Adam Davies, left, and Izzy Dobbel, right, are the current ASG vice president and president. Every aspect of this year’s election cycle will have to adapt to virtual platforms, election commissioner and Weinberg freshman Joe Maino said.

Facing campus closure and the uncertainty of COVID-19, Associated Student Government announced a plan last week to remotely elect its next president on an altered timeline.

In a regular presidential election cycle, ASG would have announced the candidates by mid-April, allowing them to campaign around campus and hold an in-person debate. They would also have elected next year’s executive board by the end of that same month.

Instead, campaigns will be announced on April 25 at 8 p.m. CST, and voting will close on May 2. Every other aspect of the election cycle will have to adapt to virtual platforms, election commissioner Joe Maino said. The Weinberg freshman has been communicating with the two potential candidates to make sure the election process doesn’t cause additional burdens.

“(We are) very conscious of the fact that obviously no one chose to be in this situation,” Maino said. “We’re collaborating with the two campaigns to make sure that it’s something that they accept.”

The campaign period has been reduced from a 9-day to 7-day campaign, he said. Each slate will also have a spending limit of $150 instead of the usual $300 and will receive a longer period of time to complete election eligibility requirements.

ASG will also host a debate on April 27 at 6 p.m. CST on YouTube Live.

Maino added it will be difficult to increase student involvement in the election process due to COVID-19. The student government will also work with the University to disseminate voting information and campaign materials through a mass email system.

“It’s inevitable for the student body to be less engaged and attentive right now but as an election commission, we really know the importance of having people be engaged and paying attention right now,” Maino said. “Having stable leadership for next year is just more important than ever.”

The source added that the remote quarter will challenge the campaigns to be more creative in the ways they are reaching out to students. The worry, the source said, is that the campaigns will not be able to tell how effective their outreach strategies are going to be.

“This will be the first completely digital campaign,” the potential candidate said. “There’s no testing ground or rulebook for this.”

The digital nature of the campaign provides all the more reason why students should pay attention to the presidential election, even during COVID-19, current ASG leaders said. President Izzy Dobbel and vice president Adam Davies, both SESP seniors, will graduate at the end of the school year.

A lot happens during the summer, Dobbel said, and there needs to be an advocate for the student population when classes are on hiatus. Their successors will also inherit the project to digitize the Student Organization Finance Office, address food insecurity and more.

“ASG as an organization deserves to know who is in charge,” Dobbel said. “The students deserve to know who they can reach out to when they have issues.”

ASG’s future leadership will also be in charge of many COVID-19 advocacy roles, Davies said, as it has more opportunities to directly communicate with the University compared to the general student population.

The next administration should continue its collaboration with QuestBridge to prioritize first-generation, low-income students during the pandemic, Davies said, and make sure to contribute student input to the new provost selection process.

“It’s really important, especially now, that students are engaged in choosing the people that they think will be the best advocates for them,” Dobbel said, “Because going forward, it’s only going to be emergency response.”