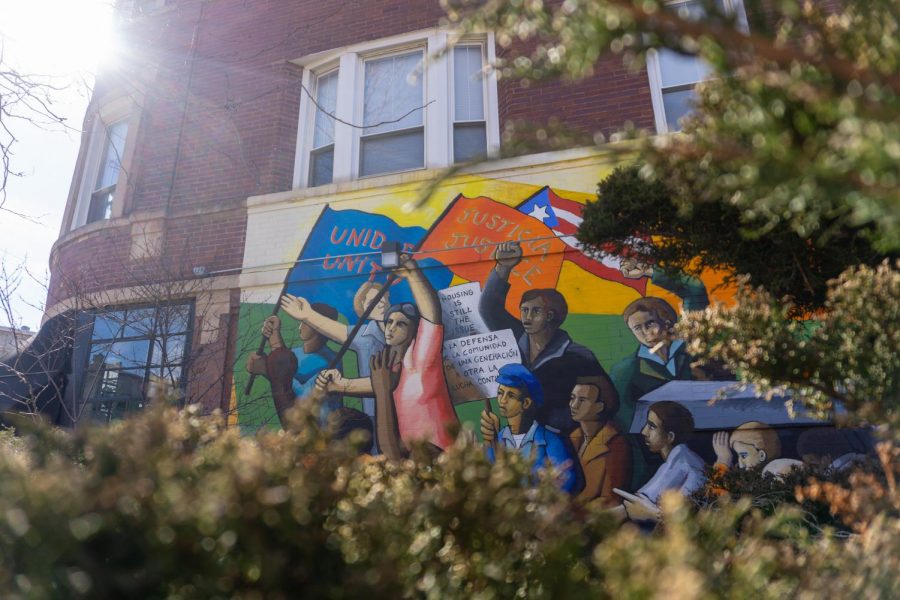 Located on the corner of Division Street and Hoyne Avenue, “Together We Overcome” is one of Chicago’s oldest surviving urban artworks. Painted by John Weber, it signifies West Town resident’s longing for peace during a time of conflict.

On a balmy afternoon, Chicago’s West Town resident Melissa Kamhout was awestruck by a vibrant mural while jogging in the neighborhood. Located on the corner of Division Street and Hoyne Avenue, the mural that splashed across the wall outside an Argentinian restaurant attracts pedestrians to slow down their pace and linger.

“I really don’t know [what the mural is about],” Kamhout said. “Despite the fact that it looks like it’s portraying something dramatic, it’s still really colorful and awesome.”

The mural, titled “Together We Overcome,” was painted by John Weber in 1971 with the help of the Latin American Defense Organization. It depicts two arms clasping in unity, next to community members marching and another group breaking up a fight.

The mural was created to address gang violence that was taking place, said Weber, co-founder of the Chicago Public Art Group. At the time, West Town dealt with drug trafficking as well as a constant racial conflict between neighboring gangs. Recognizing the residents’ struggles and aspirations, Weber said he used the mural to highlight their longing for peace.

Fifty years later, property developers have taken over the area by constructing condos along the streets. Although newcomers are captivated by the mural’s striking visual effect, most of them overlook the history of the neighborhood they are now calling their own.

It started in 1967, when William Walker, a founder of the Organization of Black American Culture, and local residents gathered to create the “Wall of Respect” on the corner of 43rd Street and Langley Ave. The mural comprises a collage of African American heroes and heroines, such as Malcolm X, Muhammad Ali and Gwendolyn Brooks, signifying the community values and black pride of the neighborhood.

Pounds emphasized that community engagement is integral to the creative process of public murals. Artists should initiate dialogues with the residents to understand their experiences, Pounds said, so that the community can feel empowered when the artworks embody their identities, yearnings and concerns.

In 1988, Pounds collaborated with other muralists to paint “I Welcome Myself to a New Place” under the railroad tracks that divided Roseland and Pullman. Frustrated by the racial segregation of the two neighborhoods, Pounds said he hoped the mural would encourage harmony and mutual respect. He invited more than 100 residents to join the creation process, which features historical figures from both neighborhoods as well as patchwork that represents their various cultural heritages.

“The community feels enlivened and proud because the mural represents their lives,” Pounds said. “People start to have conversations with each other and appreciate each other that they would not have had otherwise.”

New residents bring mural removal
When gentrification brings demographic change to a neighborhood, however, Pounds warned that murals can lose their meanings and validity to the incoming residents. New property owners who are insensitive to the works’ cultural significance often neglect the need for mural restoration or simply erase the walls.

“Together We Overcome” is one of the rare cases where community murals have been successfully preserved during gentrification, Weber said. He added that most of them vanished when property speculators bought out apartment buildings and storefronts to jack up the rent.

“(Real estate companies) want to get rid of these people and replace them with Anglo yuppies,” Weber said. “They get rid of their artwork, because that gives people incentives to stay and organize and fight to keep their names on.”

“All of Mankind,” a mural by Walker outside a church at the edge of the Cabrini-Green housing complex, was painted over in 2015 when the building went on sale and luxury housing replaced the public housing complex.

Similarly, the mural “Casa Aztlan” outside Pilsen’s former community center was painted over when a real estate company purchased the property in 2017. Residents were outraged by the removal of vibrant portraits of Chicano leaders, so they organized a rally, held a vigil and ultimately demanded the investors allow it to be painted back.

In 2019, Chicago officials launched an online mural registry after city workers erroneously removed commissioned public artworks. To register a mural, the database requires both the artists and the property owners to submit the application. The city also exempts itself from maintaining registered murals or protecting them against vandalism.

Weber said the preservation of murals allows residents, especially those in immigrant communities like West Town, to hold onto their history and leave some heritage for future generations.

“One of the very difficult things that new immigrants have is not (being) able to place themselves,” Weber said. “But a generation later, they should be able to say, ‘yes, we rebuilt this neighborhood. We had our memories. We left our trace.’”

Weber recalled that when he was restoring the mural “Together We Overcome” in 2004, former residents would come by every day when work ended at the factories. He said there would be a parade of cars and people in tears, showing their gratitude to him for preserving the mural that tells their story.

“Hopefully, some artwork is like a footprint,” Weber said. “They are able to locate their history, and to just feel really, really proud.”