García: The Trump Administration Should Help — Not Hurt — Our Farmworkers 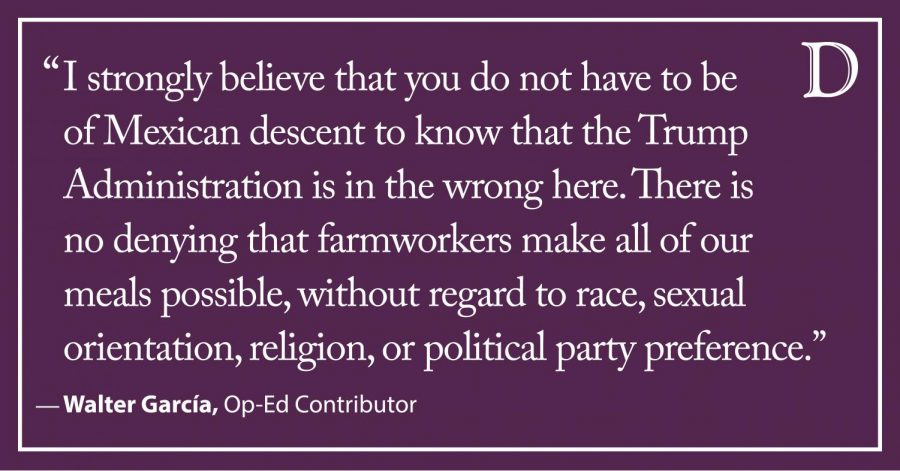 Thurgood Marshall, the first African American to serve on the United States Supreme Court, once said, “The measure of a country’s greatness is its ability to retain compassion in times of crisis.”

At present, our country is facing a crisis of unprecedented proportions — we now have the most COVID-19 cases in the world as well as the most COVID-19 deaths in the world — yet our collective greatness, it pains me to say, remains elusive. For example, many workers considered “essential” continue to lack personal protective equipment largely due to inaction by the Trump Administration.

Earlier this month, the dearth of our greatness revealed itself once again. On April 10, NPR’s Franco Ordoñez reported that, in order to help farmers’ bottom lines, White House Chief of Staff Mark Meadows and Agriculture Secretary Sonny Perdue are considering lowering wage rates for certain farmworkers: those here via the H-2A Temporary Agricultural Program. Approximately 10 percent of our nation’s 2.5 million farmworkers hold an H-2A visa. In other words, 250,000 individuals would be impacted if the Trump Administration moves forward with its proposal. Though their wages differ from state-to-state, they earn on average approximately $12.96 per hour for toiling under the blazing sun.

It’s a fact that our farmers are hurting. The New York Times explained that the “closing of restaurants, hotels and schools has left some farmers with no buyers for more than half their crops. And even as retailers see spikes in food sales to Americans who are now eating nearly every meal at home, the increases are not enough to absorb all of the perishable food that was planted weeks ago and intended for schools and businesses.” Therefore, our federal government can and must lend a hand to our farmers. No ifs, ands or buts about it.

Helping our farmers, however, does not mean we need to hurt any of our farmworkers. Our moral compass should be better than reducing the wage rates for those on H-2A visas. Indeed, it behooves us to remember how difficult farmworkers in general have it. Approximately half of all farmworkers are undocumented without wage protection and health insurance. Due to school closures, there’s the stress of finding childcare and providing three meals each day for their families.

They also cannot easily engage in social distancing because farm work means toiling and travelling in close quarters. And, devastatingly, they usually can’t go to the grocery store until the evening, when the shelves are barren.

As a second-year student at the Northwestern Pritzker School of Law, I would be remiss if I failed to mention that farmworkers even have to resort to our courts because they are often the victims of wage theft. For instance, three organizations — California Rural Legal Assistance Inc., Community Legal Services of Arizona, and the California Rural Legal Assistance Foundation — filed a lawsuit against Dole Fresh Vegetables, Inc., Taylor Farms California, Inc. and Foothill Packing, Inc., alleging, among other things, that thousands of farmworkers had been denied their full wages. Just this past summer, those organizations announced that they successfully secured a $2.2 million settlement.

According to the U.S. Department of Agriculture’s Economic Research Service, farmworkers are “considerably less well educated” and “more likely to be Hispanic of Mexican origin.” As the son of Mexican immigrants with a sixth-grade education, I’ll be blunt: when I first read the aforementioned NPR article, I immediately felt an onslaught of emotions — anger, frustration, disappointment.

But I strongly believe that you do not have to be of Mexican descent to know that the Trump Administration is in the wrong here. There is simply no denying that farmworkers make all of our meals possible, without regard to race, sexual orientation, religion or political party preference. In the final analysis, they, like our farmers, deserve our utmost respect — in word and deed. Think of what Teresa Mendoza, a 58-year-old farmworker in California, told Buzzfeed News: “I feel proud… I know that we are doing important work that is feeding the rest of the country.”

It is a false choice to say we can only help either our farmers or farmworkers, as the Trump Administration is alleging. If, during the Great Recession, the federal government somehow found billions and billions of dollars to bailout large corporations — something that has happened again during the Coronavirus crisis — then it can surely support both farmers and farmworkers right now.

The Trump Administration recently announced a plan to aid our farmers.

Now, I’m calling on the Trump Administration to also aid our farmworkers — those with an H2-A visa and those without one. For recommendations on what that aid could entail, one can turn to the letter that the Congressional Hispanic Caucus recently submitted to Congressional leaders.

Among their recommendations are to provide farmworkers with “pandemic premium pay (in line with pay for other frontline workers in our country’s critical infrastructure)” and to provide them “with legal protections from deportation,” since those who are undocumented can still be deported despite being deemed “essential.”

Will you join me in this effort?

Walter García is a second-year student at the Northwestern Pritzker School of Law. He can be contacted at [email protected] If you would like to respond publicly to this op-ed, send a Letter to the Editor to [email protected] The views expressed in this piece do not necessarily reflect the views of all staff members of The Daily Northwestern.