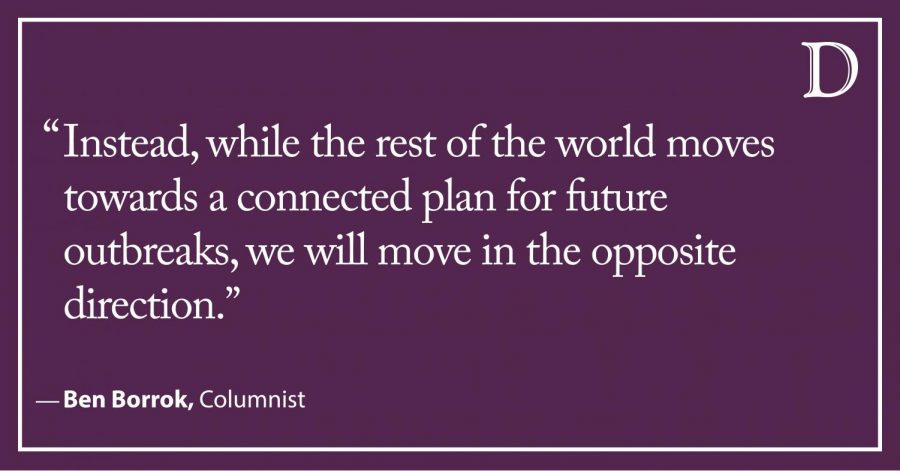 The September 11th attacks took the lives of 2,977 Americans and fundamentally altered the way of life in the United States. The foundation of the Department of Homeland Security, wars in Iraq and Afghanistan, the monitoring of Americans’ lives, and rampant Islamophobia all found roots in the aftermath of 9/11. No event has fundamentally changed American life so drastically since that day — until now.

The COVID-19 pandemic will not just be a footnote in a history textbook, but will be remembered as a monumental shift in the lives of ordinary people all over the world. As of April 19th, more than 37,000 Americans and over 150,000 people have lost their lives. The virus has revealed a weakness in our disaster preparedness, overwhelmed our ineffective healthcare system and exposed a litany of socio-economic issues in the United States.

Yet, despite the growing death toll and widespread suffering, there remains a surprisingly large group of Americans who are blithely ignorant to our new reality. Irresponsible acts such as mass protests of stay-at-home orders, proliferation of false information and downplaying of the pandemic only serve to worsen the country’s overall response, as well as prolonging the need for the preventative measures in the first place.

The heavily individualistic culture of the United States has propelled the outbreak of the virus to heights that no other country has seen. Proud declarations from people ignoring social distancing guidelines have flooded social media in recent weeks. Pundits have continued to put their elderly audiences at risk by encouraging them to defy governmental orders, orders that already came far too late.

The refusal to accept necessary preemptive actions in order to continue economic gains will not be looked upon kindly, and the new messaging for a re-opening of the country feels risky and financially backed. The new understanding amongst a majority of Americans regarding their own government’s lack of interest in their well-being could be a turning point for the future of the nation.

It would not be a surprise to see an increase in support for the Fight for 15, a movement to increase minimum wage across the country. So far, employees at grocery stores have been thrust into the frontlines of a war against disease — something that their pay, nor their salary seems to reflect. So far, over 30 employees have died after working at stores like Walmart and Kroger, while an additional 3,000 have contracted the virus while on the job. In the case of Leilani Jordan, a grocery employee who passed this past week, her final paycheck amounted to $20.64. American citizens are dying to preserve the pockets of their employers, all while being denied basic decency.

The stimulus paycheck debacle, involving weeks of debate for Americans to receive the bare minimum, resulted in a one-time $1,200 paycheck based on 2018 tax returns. This doesn’t seem to account for millions of newly unemployed citizens who need to make ends meet. This sobering reality will have many looking at the rights and systems of other nations to alleviate the economic stress.

We could have a program like Germany’s Kurzarbeit program avoids mass layoffs through government-supported welfare to keep employees paid and safe. Instead, while the rest of the world moves towards a connected plan for future outbreaks, we will move in the opposite direction.

It’s bleak, really, to think about the inevitability of intermittent social distancing that will arise due to a consistent shortage of capable healthcare infrastructure. The massive cuts to the health service budget, the dissolution of the pandemic response team and the inefficiencies of our current structure means that much of the next few months or years will be a battle to maintain vacancy at hospitals.

A prolonged recession will also put millions over the edge into inescapable poverty. Current models view the upcoming recession as comparable to the Great Depression and worse than the 2008 financial crisis. The loss of small businesses will give way to corporations absorbing an insurmountable amount of political influence in Washington. Even more so than now, we will be at the whims of a select few. Battles for universal healthcare and social safety nets will be met with force from CEOs who will look to keep costs down as much as possible. In the face of economic strife, austerity measures will not be the solution. The focus on numbers over people is what got us into this mess in the first place, and it will not save us from ourselves.

I want to be wrong, I really do. Yet, every day for the past week or so, I have awoken to another person on television attempting to convince the American people that only 2-3 percent of the population will die, and that we should sacrifice them for the good of the economy. I cannot reasonably justify millions of people dying for the sake of money. These hypothetical people have families and lives outside of the workforce that are worth far more than it is made out to be. Already, families have had to say goodbye to loved ones over Zoom, and sometimes not at all, and it should be a crime to expect others to follow suit. It is up to us to save ourselves and each other.