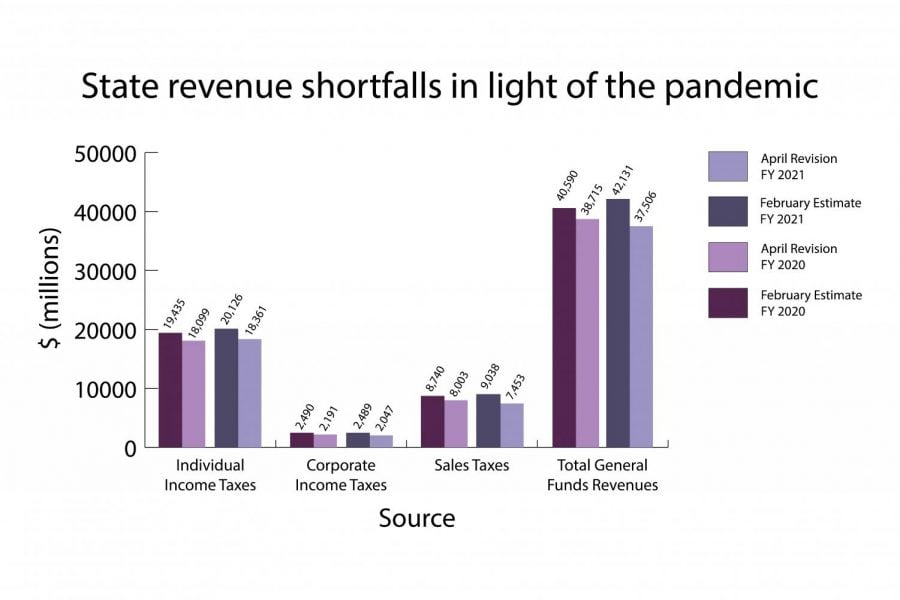 The governor said there has been a 7 percent drop in Illinois’s source revenue. The pandemic has resulted in decreases in sales and income taxes, as well as a loss in revenue from the lottery and gaming industry.

According to the Governor’s Office of Management and Budget, these shortfalls have created a budgetary gap for the next fiscal year. If the Illinois Fair Tax Measure passes in November, a graduated income tax will add $1.2 billion in revenue — still well short of balancing the expected $7.4 billion shortfall.

“This is the hardest time to collect human services and healthcare services when people are not working…this is (also) the time when (people) need those services the most,” Gabel said. “It’s always been a bit of a contradiction that at the time when people need money the most, the state has less money.”

State funding for these sectors relies on the passage of the Illinois Fair Tax Measure, which would implement a graduated income tax.

If the graduated tax fails, the government initially planned to allocate only $200 million in K-12 spending and decrease funding for public universities and senior-based community care.

Now, amid the pandemic, House budget negotiator State Rep. Tom Demmer (R-Dixon) is anticipating more voters will be hesitant to vote for the tax ballot.

“People will be looking at it to say, is this a time when we want to add additional tax burden on small businesses who had to be closed for the last six months or longer,” Demmer said. “(It would) make it more difficult for them to come out of a recession.”

Gabel, however, said instituting the graduated tax would provide an additional $1.6 billion to the budget, and that the alternative, a flat tax, would “hurt everybody.”

“We’re seeing the people who can step up to the plate really stepping up and helping others,” Fine said. “That’s really, in my opinion, a reflection of what the Fair Tax is: those who can afford to pay more do pay more.”

The governor and legislators are looking to the federal government for additional help. On Wednesday, Pritzker called on Congress to pass another stimulus bill to help states and territories facing budget deficits.

Congress passed the CARES Act, a federal stimulus bill, in March as a response to the pandemic. Pritzker said it provides up to $2.7 billion in state support, but can only be spent on “new expenditures related to coronavirus” and cannot be used to alleviate any of the state’s revenue shortfalls.

“This whole pandemic has really exposed the income inequality in our country,” Schakowsky told The Daily. “The people who are hurting the most right now are people who started out struggling… We’re going to need more and we already need more money than ever to be able to take care of people.”

Despite the ongoing budget crisis, state legislators are committed to passing a budget. Normally, the General Assembly would vote on the budget towards the end of May, when its session ends. Members of appropriations committees would hear from directors of state agencies, working with colleagues and deciding how to allocate money in the budget.

Now, all that work has gone virtual, with legislators working in informal committees over Zoom and conference calls.

Even though the pandemic has sidetracked the typical timeline of the budget process, many members are intent on passing a budget by the June 30 deadline, the last day of this fiscal year.

Fine said passing the budget is critical. The state went two years without a budget under Gov. Bruce Rauner, which was devastating to human service providers and universities, she said.

Demmer is optimistic members of the General Assembly will reach across the aisle in a bipartisan effort to pass the budget. He said this is critical legislation that legislators need to work together on.

“This pandemic, from a health side, is affecting almost every single county in Illinois… It probably will affect every county by the time we’re done,” Demmer said. “Whether you’re Republican or Democrat, I think we all have a shared goal in providing some relief and stability for our hometowns wherever they may be in the state.”