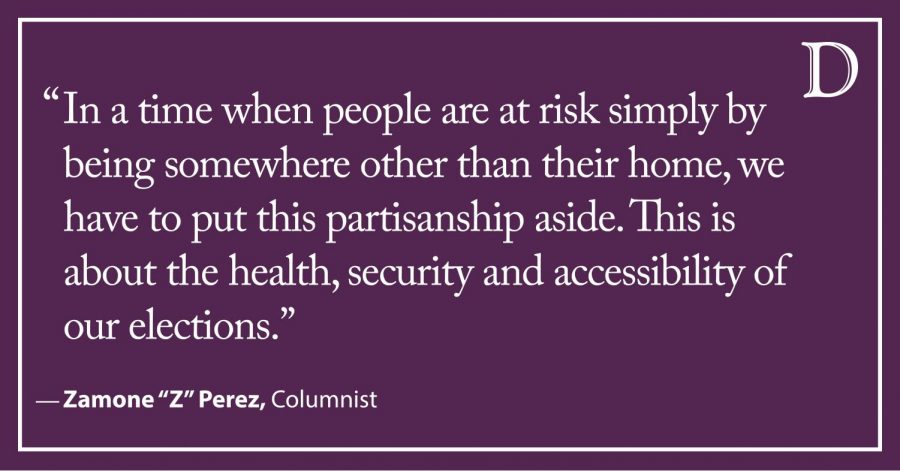 This is the first column in “Democratic Resuscitation,” a series exploring and advocating for key reforms to our democratic institutions in the United States in order to give voice to all Americans.

This past Winter Quarter, I spent my time in the nation’s capital to try my hand at political journalism. Reporting on Capitol Hill, in classes and seminars, we began to discuss the greatest threats to our democracy and the different solutions to fix them.

In the age of President Trump, the institutions that have worked for centuries to safeguard our republic have been relentlessly attacked, and some have already been considerably weakened by the current administration. A complete lack of appreciation for democracy, or as Churchill called it, “the worst form of Government except for all those other forms” has left our institutions exceedingly fragile.

From campaign finance reform to ranked choice voting, there are many institutional changes that the republic can make to enhance the influence of regular voters — not just special interests and those with the largest bank accounts.

Each week, I will work to break down a certain shortcoming in our waning democracy, and I will offer solutions that seem most apt to strengthen the voice of the American people in our government. My hope is that we can begin to have conversations about the nature of our government, the inherent cracks we see in it and the best way to fill them to take back the fundamental values of our democratic experiment.

In the peculiar times we live, Americans from all corners of the country have worked to navigate a world put on hold from the COVID-19 pandemic.

In our economy, Congress passed the largest stimulus package in history, dwarfing 2008’s financial rescue. In social occasions, churches have come up with unique ways to worship, such as drive-thru services, and college courses have turned to online instruction.

Yet, in our republic, our elections have gotten the crumbs of our collective worry.

In Wisconsin, our neighbors to the north had to carry the brunt of the worry about public health and elections in the age of COVID-19. Badger State voters were the only constituency holding an in-person election in April, after multiple other states changed the dates of their primary contests or shifted to by-mail voting only.

Wisconsin Gov. Tony Evers, a Democrat, fought with the Republican-controlled state legislature to postpone the state’s primary election, and he was ultimately ruled against by the Supreme Court.

Then, on Twitter, President Trump made sweeping accusations against a potential national vote-by-mail system in the 2020 presidential election, tweeting that vote-by-mail has “tremendous potential for voter fraud.”

Multiple states have conducted vote-by-mail efforts, from midnight blue Washington state to ruby red Utah. A quarter of all votes were cast by mail in 2016, according to the Election Assistance Commission, and Trump even cast his Florida ballot absentee this year.

Though the political implications of holding a national election in a pandemic are not entirely clear yet, state indicators in the 2020 primary elections show the concern from Americans of all regions and statuses is real and can have real impacts on turnout in our elections.

Illinois’ primary election became a real-life electoral lab rat that may potentially foreshadow a nationwide trend. When Illinois did not move back their primary election date, voter turnout in the mid-March contest plummeted 21 percent from 2016.Some polling places could not even open, as some election judges did not show up for the job.

Vote-by-mail is a safer option. And across states, there has been no evidence of
widespread voter fraud from vote-by-mail ballots.

The president has claimed in a tweet that vote-by-mail is “RIPE for FRAUD.” He says this because he is not interested in public safety or an effort to protect our elections. The resistance to vote-by-mail quite simply is another attempt to keep people from voting, in the likes of voter purges and the dismantling of the Voting Rights Act.

Of course, there are valid concerns about increased intimidation, but these tactics have not been proven to be widespread or a true threat to a person’s right to vote, according to a CNN fact check of the president’s remarks.

In a time when people are at risk simply by being somewhere other than their home, we have to put this partisanship aside. This is about the health, security and accessibility of our elections.

Even more than that, though, this could be a fundamental way to increase participation in our elections to strengthen civic responsibility and our democracy.

Zamone “Z” Perez is a Medill sophomore. He can be contacted at [email protected] If you would like to respond publicly to this op-ed, send a Letter to the Editor to [email protected] The views expressed in this piece do not necessarily reflect the views of all staff members of The Daily Northwestern.