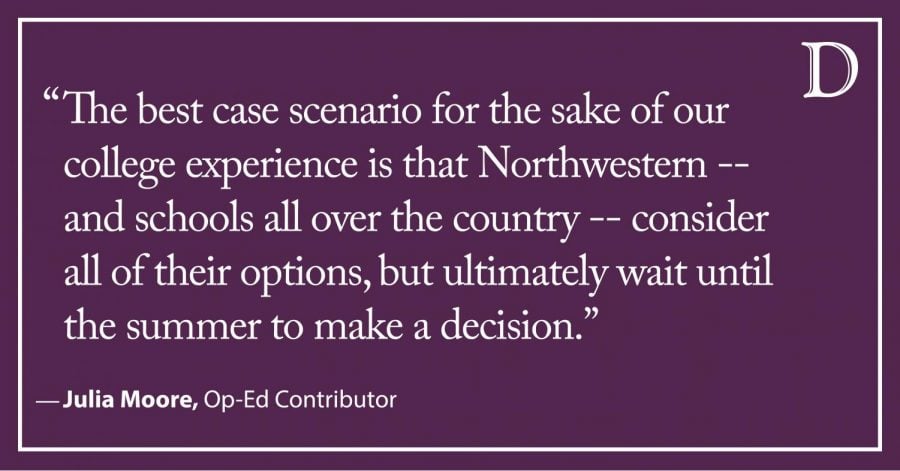 In early March, when Northwestern extended spring break by a week and moved the first three weeks of Spring Quarter to remote classes, no one on campus was particularly shocked. Universities around the nation had already made the same decision, and many had called for the entirety of the remaining spring term to be held remotely. The likelihood of a Spring Quarter on campus seemed iffy, but students clung to the hope of a return to Evanston in early May. What no one had considered as they mourned the loss of a beautiful Spring Quarter spent primarily on the lakefill was that their Fall Quarter could come to be compromised, too.

As reports continue to suggest that social distancing — the act of staying six feet away from others and spending time primarily in the house — could become an annual occurrence if COVID-19 resurges as a seasonal illness like the flu, many students worry that their fall term of college, and potentially more after that, will suffer.

But September is far away. Things change so quickly with regard to COVID-19-related news that no one can accurately depict what Memorial Day weekend will look like, let alone the end of September. Where Northwestern hopefully has a leg up on other universities is our start date, which is nearly four weeks after the average university begins their fall semester.

Is that a glimmer of hope? Are our chances of being back in Evanston for the first day of Fall Quarter higher than those of every other college student?

Maybe. But the way it seems to work is that once one school calls it, the rest eventually follow suit. So if a university that typically returns to campus in mid-August cancels their fall term and moves classes online, the chances of Northwestern doing the same only increase.

Another quarter of class online is, in my mind, the worst case scenario. If there are questions of the safety of letting all students return to campus in September to begin Fall Quarter, then the quarter should be postponed. Moving classes online simply means students miss out on more precious time on campus after their fleeting four-year window has already been cut short, and suffer the implications of receiving instruction that is certainly of lower quality than instruction in-person is.

An online Fall Quarter means over 8,000 students’ college experiences will lose one-sixth of their anticipated lifetimes. It means four more classes taken as pass/fail, which is really just four missed opportunities for students to raise their GPA. It means students considering taking a gap year or quarter off in order to avoid missing time on campus and paying full tuition for classes they simply won’t put as much effort into.

If a change has to be made, Fall Quarter should be postponed.

Boston University recently announced its tentative plans to postpone their fall semester to January 2021 if the need arises. While postponing means students are essentially on a hiatus from school from June to December — which would be a change to the academic calendar students have grown used to since pre-school — the six-month period of time off would allow students to take on responsibilities at home or become employed and earn money to contribute to their family’s income or put toward their own pursuits.

As the US is in the midst of a looming economic crisis, and unemployment rates have reached nearly 18% nationally, the time off could allow students to seek employment where possible and assist their families during a time of national financial hardship.

Additionally, postponement of the quarter would mean pushing off tuition payments, with Northwestern seeking no additional funds from families until January 2021, another potential advantage for families entering financial hardships as a result of the pandemic.

The reality is that no one is quite sure how to handle everything being thrown at us right now. Northwestern’s administration is doing its best to adapt as well as it can without compromising our education, and so far, they’ve done really well. Waiting as long as they did before moving the entirety of Spring Quarter to remote learning was an extremely rational way to approach the evolving situation. All we can hope is they do the same when making a decision about the fall.

We aren’t going to know what the world will look like in September until September arrives. So the best case scenario for the sake of our college experience is that Northwestern, and schools all over the country, consider all of their options but ultimately wait until the summer to make a decision. The last thing we want is for a decision to be made too early — for September to roll around and the possibility of all of us being on campus to suddenly become extremely feasible in retrospect.

For now, I’ll just keep dreaming of spring in Evanston, hoping that September brings us all Brew Bike and sunny walks along Sheridan Road.

Julia Moore is a Medill freshman. She can be contacted at [email protected] If you would like to respond publicly to this op-ed, send a Letter to the Editor to [email protected] The views expressed in this piece do not necessarily reflect the views of all staff members of The Daily Northwestern.