Sastoque: What the pandemic means for the arts 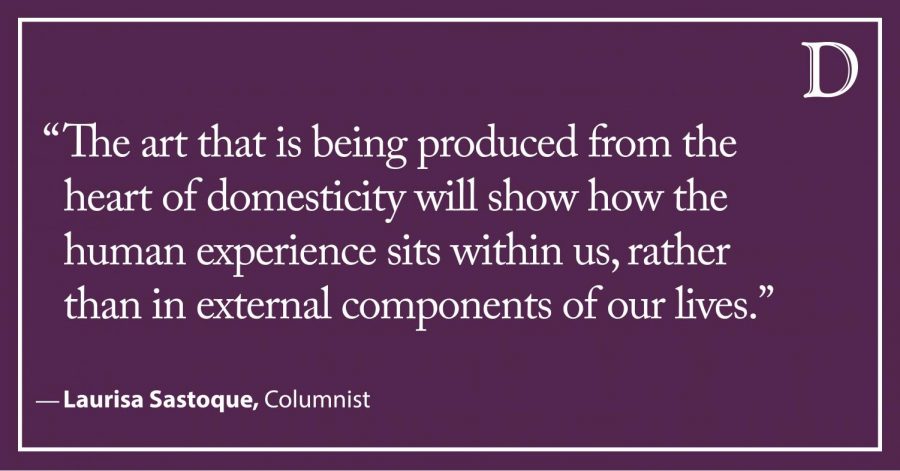 Mass event cancelation, public space closures, stay-at-home orders — this spring chimes in as a harsh reminder that the “normalcy” we establish for ourselves is never guaranteed. As everyone’s routines around the world crumble to pieces, we find ourselves in a process of readjustment. Be it online classes, remote work or unemployment, the pandemic has called for indiscriminate adaptation. Suddenly, mundane privileges became obsolete, and we were restricted to the confines of our homes, devoid of all distractions to the human experience.

The irony is, that even in the harshest of times, home confinement looks much more enjoyable to some than to others. A stagnant economy has resulted in a crisis that affects everyone, but does so within pre-existing patterns of inequality. The postulate of long-term isolation looks like a boring vacation to some, but to others, it looks like a countdown to bankruptcy.

Among those distressed hearts are the individuals whose work focuses on an audience. Museums, theaters, cinemas, concert halls and other venues for the arts find themselves in tight situations. Being highly dependent on an influx of spectators, audience or following, empty streets have signified what could be a loss of purpose for these entities.

Many have opted for remote alternatives. The National Theatre in the U.K., for instance, opened a section titled “National Theatre at Home,” where recordings of amazing performances including “One Man, Two Guvnors” and “Jane Eyre” were made available to the public for a limited time on YouTube. Similarly, museums like the National Gallery of Art, in Washington D.C., uploaded several online exhibits of their materials, accompanied by interactive interfaces and informative descriptions.

However, even with these renovated virtual alternatives, institutions dedicated to the arts still find themselves in financial and creative danger. Now depending largely on donations, smaller businesses with a smaller fundraising capability risk permanent closure. The case is particularly poignant for the individuals who work at these places, whose creativity has been halted and financial security exacerbated.

I wonder, where does creativity stand in times like these? Confinement has definitely had a gigantic impact on the consumption of artistic material — people are watching more films, reading more books and listening to more music. Therefore, it is not the diffusion of creative work itself that is vulnerated, but rather a component that often goes hand-in-hand: its live performance and in-person value.

Artists are confronted with a major turning point, the addition of a barrier in the form of a recording or a livestream before their audiences. Even the film industry, which traditionally delivers content in the form of a recording separated from the public by a screen, meets the challenge of transitioning from the congregation of a cinema theater to online platforms.

Although highly dependent on access to an internet connection and other socioeconomic factors, these transitions have made works of art more readily available for people of different backgrounds. In that aspect, the virtual revolution has been positive.

It still does, however, represent a change for live performers who consider a crowd’s gasps, claps and laughter a part of their work. Famous American playwright Lauren Gunderson writes in her article “Theater in the Time of Pandemics” for the San Francisco Chronicle, “What is a play if there is no audience… I realize that I write not for audiences but with them.” These are important times to ponder the relationship that art builds with a reader, a spectator, or a listener. Is art a fundamental form of expression, or an avenue for human connection?

Despite the hardships, artists continue to create from the limits of their homes. Spending more time inside has also meant spending more time with ourselves, with our thoughts, our desires and our concerns. Inspiration is definitely hard to attain when our eyes have only four walls to venture to. However, with so much going on in the world, so much change, so much suffering, artists will get to explore the expanses of their minds in steady creativity.

I am excited for all the different creations that will emerge from this historical turning point. The art that is being produced from the heart of domesticity will show how the human experience sits within us, rather than in external components of our lives.

For now, artistic productions remain the friends of interruption. Whether it be a new album from your favorite artist, or a film that brings magic to life, the arts will remain a shelter in times of hardship. And one of the ways in which everyone can contribute, besides the extremely helpful donations that help keep artistic organizations alive, is by recognizing the immense value of creativity and by honoring a field that is both inherent and necessary.

Laurisa Sastoque is a Weinberg freshman. She can be contacted at [email protected] If you would like to respond publicly to this op-ed, send a Letter to the Editor to [email protected] The views expressed in this piece do not necessarily reflect the views of all staff members of The Daily Northwestern.