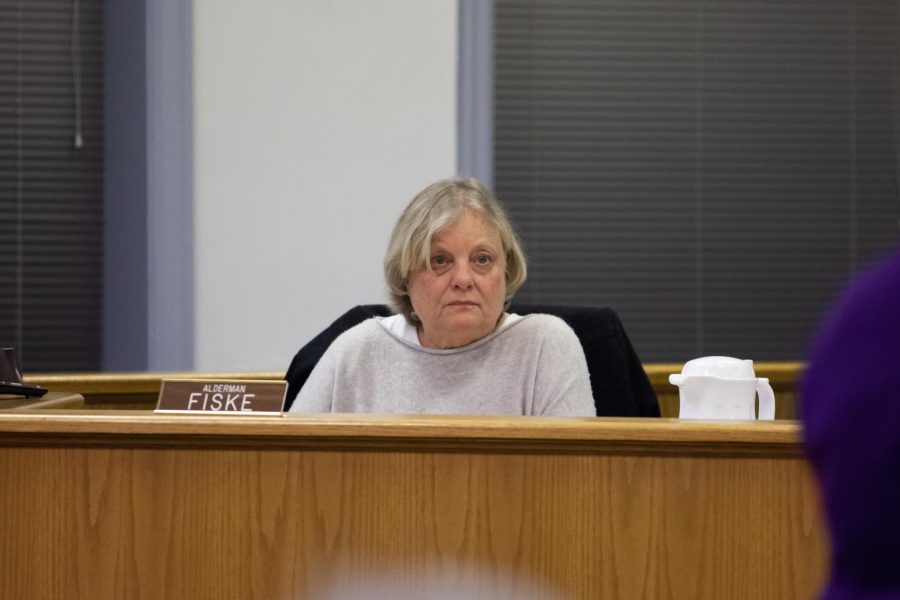 Ald. Judy Fiske (1st). Fiske voted against the plans for a possible high rise to be located at 605 Davis St. during Monday’s Planning and Development Committee meeting.

The city’s Planning and Development Committee voted during its virtual Monday meeting to introduce an ordinance for the creation of a 220-foot-tall high-rise to City Council.

The planned building, intended for the lot at 605 Davis St., would be built atop the Chase Bank drive-thru ATMs, incorporating them into the facility. In the plans, the two lowest floors, which include the drive-thru, are designated for commercial use. The remaining 16 floors will be mainly made of glass and function as office space. Currently, the resolution is slated to appear on the agenda for the April 27 City Council meeting.

The ordinance also calls for the building to be granted special use status, as it exceeds zoning requirements for the area, including the area’s 85-foot height limit. Previously, a 353-foot-tall building was proposed for the lot, but the committee denied the plan in 2018.

In the current plan, the developer said Evanston residents could fill five full-time construction jobs and 30 percent of the jobs in the building after its completion.

However, Ald. Melissa Wynne (3rd) said the potential jobs and economic development may not warrant approval. The proposal’s other proposed benefits include funding for programming in Fountain Square and the sponsorship of a trade fair at Evanston Township High School. Committee members said they want the high-rise’s developer to propose building features that help the community.

“It would be good to have some other significant additional public benefit.” Wynne said. “I like the idea of adding to the affordable housing fund. I like the idea of looking at viaducts, which are always a problem for us. So I’d like to hear more about that from the developer in the next two weeks.”

Despite conversations about additional public benefits, some residents expressed concerns about the proposed construction’s impact on the city, as well as the plan’s timing.

Evanston resident Lori Keenan said at public comment during the Monday City Council meeting she is concerned the council is continuing to consider developmental projects amid COVID-19.

Keenan said Illinois’ state of emergency prevents community members from voicing their opinions on the development, among other issues. As a result, Keenan said she was unsure that the council should consider any non-emergency matters before the pandemic ends.

“Is that what disaster response best practices dictate, to forge ahead with development discussions and other non-pressing issues, especially development and construction, in a climate that may be forever changed?” Keenan said. “We don’t even know what downtown Evanston is going to look like when this is all said and done.”

Ald. Judy Fiske (1st), the only council member who voted against the resolution, said possible safety issues concerned her, including the vehicle entrance’s proximity to a daycare. Fiske said she is also worried about the traffic problems the drive-thru ATMs could cause, and wanted to ensure the height of the building didn’t create a wind tunnel on Davis Street.

But Ald. Donald Wilson (4th), who voted against the 2018 proposal, said the current project was “much more appropriate” for the area.

He said if the developers add more community benefits before the next council meeting, the building could become an asset to the city as the first high rise constructed in Evanston in approximately 20 years.

“The economic environment is going to be changing, and I want us, as a city and a community, to be well-positioned for when we come out of this, to be prepared to get businesses going,” Wilson said. “And I think this is a way to do that.”