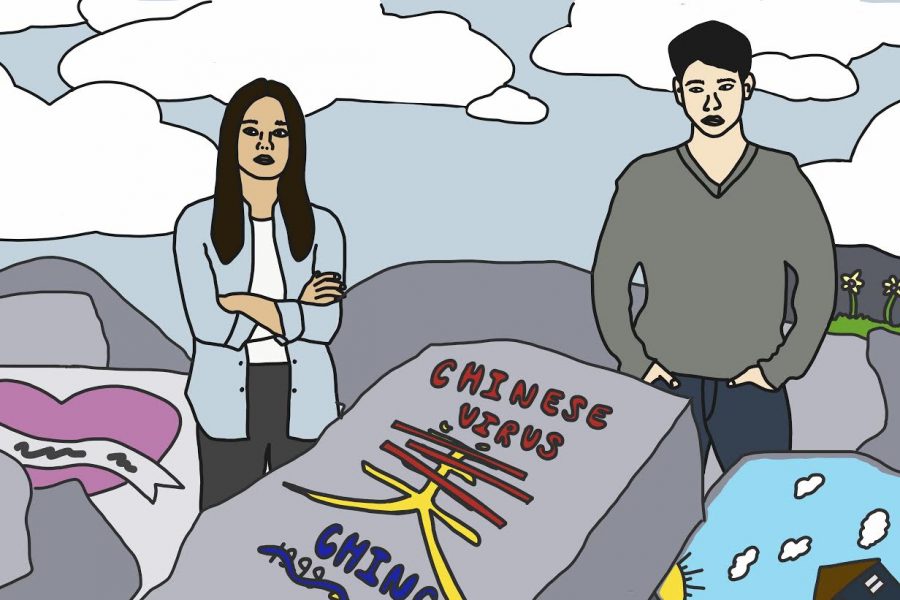 Evanston resident Disha Rao was passing by the Davis Street Metra station the night of March 17 when she watched a middle-aged man blame an Asian man and woman for the COVID-19 pandemic: “It’s because of you people, we are suffering.”

Rao felt scared by the racist insult — but also surprised. After immigrating from India five years ago, she said she has found the Evanston community to be accepting.

“I was shocked, and I was very scared because I’m also from Asia, so I was wondering if the same could happen to me,” Rao said.

Rao said the Asian individuals that night smiled and kept walking, and Rao herself avoided confrontation. Nearly a month has passed, but as the COVID-19 outbreak spreads, Asian residents continue to face racist incidents.

Walking on the Lakefill on March 28 with her two kids, Soo La Kim, Evanston resident and assistant dean of graduate programs at the School of Professional Studies, noticed a rock that originally displayed a Chinese character had been partially covered by graffiti that said “Chinese Virus.”

Kim had also recently heard about graffiti at a bus station on Central Street, which said “Make China Pay.” Kim said both incidents make her angry and demonstrate that Evanston is not immune to racism.

“We should try to keep track of these incidents as a community and make people aware that this is happening in Evanston, which is seen as this liberal bubble,” Kim said, who shared a photo of the graffiti on Facebook.

The next day, Kim was notified by an Evanston resident the graffiti had been painted over in black.

Local restaurants have faced racism amid the pandemic, including Koi Fine Asian Cuisine & Lounge. Owner Sandy Chen said she received a phone call at the beginning of March asking if any staff members had recently been to China.

Chen said she also noticed a decline in business at the beginning of March, weeks before the Illinois stay-at-home order began.

“I was worried a lot, and of course a little angered as well,” Chen said. “It’s not fair to put the blame on small business owners. We’re in the United States, not even in China.”

Total revenue at Koi is down 60 to 70 percent from revenue before the pandemic. Chen also owns Chicago-based French restaurant Le Sud, where she said she has not seen the same decline in business. She said the disparity arises because Americans associate the novel coronavirus with China.

Though total revenue has decreased, Koi’s carryout and delivery revenue has tripled. Chen said she is grateful for the customers that continue to support the restaurant.

Local Asian restaurant LuLu’s has suffered about a 25 percent revenue loss, according to owner Dan Kelch. He said he attributes the minimal change to the established customer base LuLu’s has accumulated since opening in 1992.

However, Kelch sympathizes with restaurants like Koi that have faced racist questioning, many of whom have opened more recently.

“I’ve always been proud to be in Evanston because I’ve thought it was a welcoming community, so I’m surprised,” Kelch said. “That’s most unfortunate.”

Goldenberg emphasized that community response to these incidents, like when residents painted over the graffiti on the Lakefill and Central Street, can be powerfully positive.

“We’ve seen community members rise to the occasion and say, ‘No, this isn’t OK,” Goldenberg said. “That speaks volumes to the type of community that Evanston is.”

As some community members fight against graffiti and racism, Goldenberg says he hopes that an attitude of allyship continues after the virus ends.

“We’re hopeful as the pandemic slows, so will these types of incidents,” Goldenberg said. “But we’re (also) concerned this will carry over into school and society as we get back to life as we knew it…we’re going to have to be allies and not bystanders.”