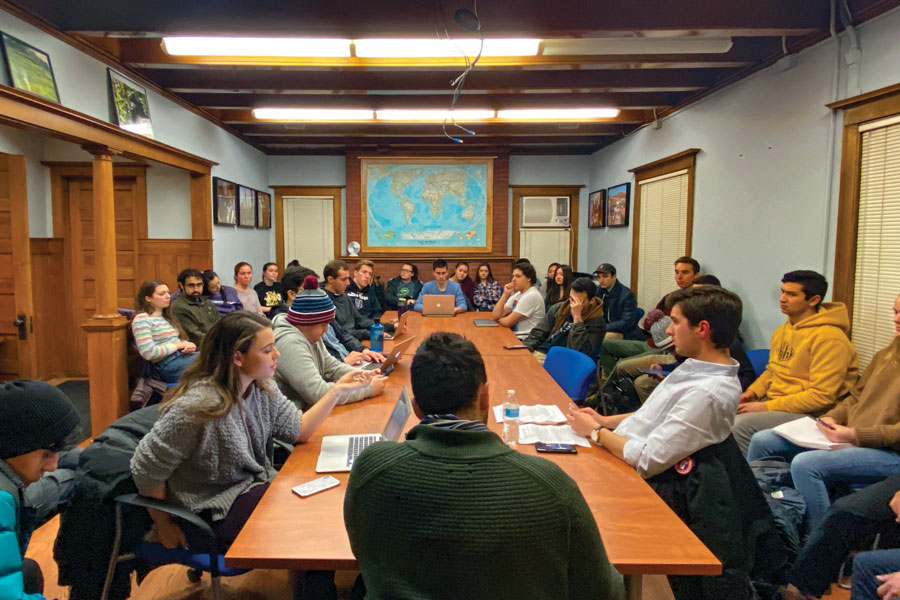 Political Union’s Feb. 11 meeting, where the group narrowly voted that the Democratic Party should nominate a progressive candidate

In their first-ever virtual meeting Northwestern Political Union, the group voted to favor the University’s decision to implement a pass/no pass grading system.

The night’s debate topic — “Should Northwestern Not Have Implemented Pass/Fail Grading?” — drew 30 attendees, with 63 percent voting in favor, 32 percent voting against and 5 percent of attendees abstaining.

On March 31, Northwestern announced a universal Pass/No Pass grading system for undergraduates this Spring Quarter, sparking debate among students over whether the University made the right decision.

Medill freshman Spencer Allan, a reporter for The Daily, led the side supporting the resolution and argued against the University implementing the pass/fail system. He spoke in favor of a “laissez-faire approach” where the University doesn’t pick the grading system.

“The idea that I debated was essentially that Northwestern should have made the pass/fail option optional instead of mandatory,” Allan said. “They shouldn’t have imposed one system or another on students.”

Allan emphasized the University and other institutions should have one concrete grading system rather than “one foot in one system and one foot out,” saying many professors continue to assign letter grades throughout the quarter before the final grade of “pass” or “no pass” appears on the transcript. He also pointed out that the system should fundamentally allow for more flexibility in the first place.

Weinberg junior and Political Union former president Molly Molloy mentioned she had a medical emergency in high school that affected her extracurricular involvement and AP performance. She would have wanted the opportunity to explain herself and her academic performance, she said.

“I would have wanted somebody to ask me the questions rather than just look at my GPA and my SAT score,” Molloy said. “There are two sides of that coin, and you just have to make sure you are looking at all of the potential externalities of every decision the University administration makes.”

With mandatory pass/fail, students don’t have to offer additional explanation for why they may not have performed as well this quarter.

Weinberg junior and Political Union co-president Ellie Buckner said one of the reasons why the group arranged this debate was to give people a space to discuss their thoughts about the mandatory pass/fail system, as many seemed to have strong opinions about it.

“We really wanted to provide a space for people to talk about those opinions,” Buckner said. “And it’s served that purpose — people were able to come and express how they were affected by the policy, how they felt about it.”

Despite low expectations, Buckner said she was “pleasantly surprised” about the turnout of the event.

“We had a great turnout,” Buckner said. “We’re going to keep exploring ways to make these Zoom debates effective, both in terms of turnout and the quality of conversation.”