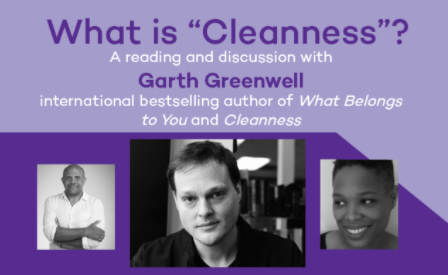 A screenshot of the event listing for the event.

Over a virtual presentation on Friday, author Garth Greenwell discussed his new book, “Cleanness,” and how the concept of cleanness functions in a worldwide landscape.

With anthropology Prof. Adia Benton and Medill Prof. Steven Thrasher as hosts, Greenwell live-streamed a reading of “Cleanness.” The author and the professors then discussed the notion of cleanness in terms of LGBTQ health, coronavirus, and queer literature.

Published in January 2020, “Cleanness” revolves around the fictional account of a homosexual American man teaching in Bulgaria. The book features explicit sex scenes involving S&M — sadism and masochism — while exploring the ideas of cleanness and dirtiness.

“I wanted to write something that was 100 percent pornography and 100 percent high art,” Greenwell said.

Greenwell started the presentation by reading a section of the book in which the protagonist, although used to being submissive, is sexually dominant with a Bulgarian man he recently met online.

The Bulgarian man asks the protagonist to hit him with a belt. Although hesitant at first, the protagonist soon gets used to this new role and takes pleasure from the sufferings of his partner.

“What I found striking was… the idea of risk assessment and risk sharing in a moment of pleasure, but also of intense pain,” Benton said during the event, referring to the protagonist’s decision to have sex without using a condom.

In the current context of quarantining and social distancing, Benton said the book motivated her to rethink these questions of where intimacy occurs and where risk is shared. She said the issue of cleanness prompted her to think about how homes might be the least clean places during quarantine because it is where standards have been quite lax in terms of constantly wiping down surfaces.

Greenwell said S&M could work as a transformation, turning stigma into pleasure through queer desire and sex. He described the moment his father called him a homophobic slur at age 14, saying it “split my life in two.”

“I can take that word and put it in the mouth of a lover,” Greenwell said. “And turn it from this source of pain and violence, and make it into… pleasure.”

When asked about writing to an audience that is predominantly straight, Greenwell said various political structures and material considerations determine what art audiences see. He said writers — especially those from minority communities — should still tell their stories.

“It’s a necessary lie to say to ourselves that, if we make something that is beautiful enough, excellent enough, fierce enough, committed enough to its own integrity, it will be unignorable,” Greenwell said. “So that we don’t package it in a way that makes it immediately legible or makes its value immediately perceptible to a majority. We don’t translate it. We don’t go to them.”