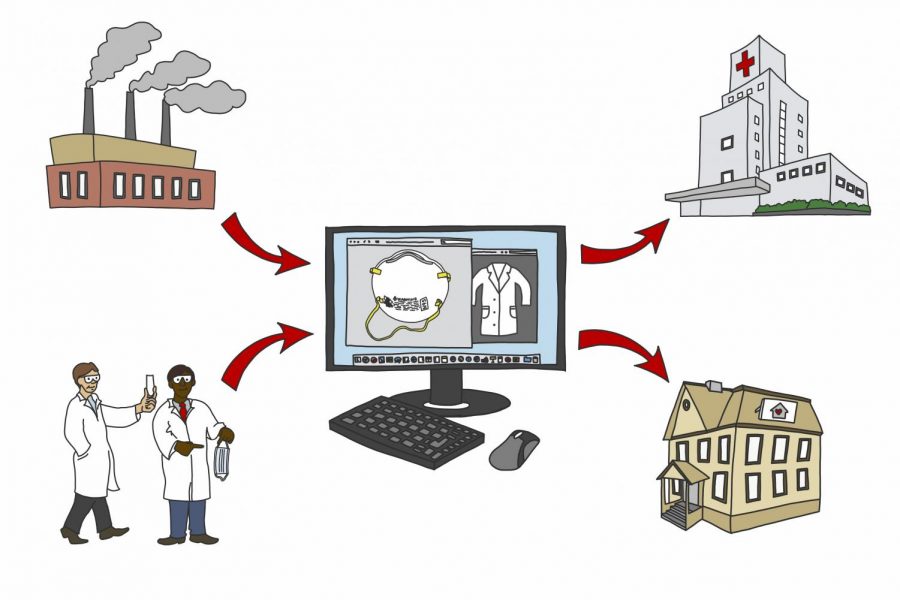 The Emergency Resource Exchange connects manufacturers and organizations with idle supplies to healthcare providers in need of help.

Early this week, Chicago startup Rheaply and the McCormick School of Engineering collaboratively launched an online marketplace to help healthcare providers get necessary supplies to face the COVID-19 crisis in Illinois.

The site is free to use and allows hospitals, homeless shelters and other institutions in need to request precise amounts of specific medical supplies. On the other side, supply manufacturers, dentist and veterinarian offices, scientific labs and anyone else with idle supplies can post listings of their items for claiming or buying.

As of Thursday evening, Illinois’ confirmed cases topped 16,000 and nearly 530 people have died. The lack of personal protective equipment has fueled nationwide concerns that if too many medical workers get sick, the pandemic’s impact will drastically increase.

Reports have poured in from Chicago hospitals about medical supply shortages in recent weeks, with some nurses forced to reuse N95 masks — designed to be used just once — for up to five days in a row. On March 23, Gov. J.B. Pritzker announced that Illinois had received only 10.5 percent of the 2.34 million N95 masks the state requested from the federal government.

Some help has come. On Tuesday, Pritzker tweeted his appreciation for California Gov. Gavin Newsom after the overnight delivery of 100 ventilators, and added that Illinois has received 600 more ventilators from the federal government. But with the number of new cases each day still climbing, hospitals and shelters will need more equipment to provide safe care, including masks, gowns, gloves, sanitation items, vitals monitors and testing swabs.

Emergency Resource Exchange collaborators hope the platform will provide a simple place to unload equipment from traditional medical supply manufacturers that are ramping up production. Makeshift supply manufacturers coming onto the scene, as well as companies with idle supplies from other industries, will also be verified on the site.

The project soft-launched for pre-pilot users last Sunday before fully opening up the next day. The marketplace is built for medical supplies and lab equipment, not far from where Rheaply sprang up in 2015.

Cooper (PhD ‘14) said he noticed waste in the research lab where he worked as a doctoral student — when his team was done with something, it would sit forgotten on a shelf or be thrown away. Meanwhile, the lab next door might be ordering the same piece of equipment.

Cooper launched Rheaply to solve that exact problem, he said. The company is built around its Asset Exchange Manager, an online marketplace that institutions, including the University of Chicago and the U.S. Air Force, use to manage their internal resources.

The marketplace is best for wide-spreading organizations that might have various branches or teams using similar equipment. Sam Light (Feinberg ‘13), a professor at UChicago, recently set up a new lab for microbiology research. Rather than order expensive new graduated cylinders and beakers, Light was able to find items for his lab on Rheaply’s UChicago marketplace. Along with saving money, Light said he liked the sustainability.

“One thing that’s really maddening about buying the scientific equipment is that the companies insist on sending it with just an absurd amount of packaging,” Light said. “The fact that there’s a company that’s trying to make things a little more efficient, I think it’s a great thing.”

Cooper’s hopes for Rheaply are wide-ranging. He said he sees technology like his that connects people as a cornerstone of the circular economy, or the concept of phasing out waste by reusing resources and redesigning business models. The company clinched a $2.5 million seed round in March, which Cooper said they plan to spend mostly on engineering and product hires. Some cash, he said, is going into working on and marketing the Emergency Resource Exchange, money he called “an investment in our community.”

Rheaply’s vision, Cooper said, is to make everything on Earth “findable.” Similar to the way Google delivers the world’s information, the company would like to one day “deliver” the world’s resources. So when the coronavirus crisis started taking over headlines, Cooper said, the team at Rheaply knew they were uniquely positioned to help.

“If we knew exactly where every ventilator was in the entire world, you would see how it might be easy to move ventilators to where they’re needed, and away from where they might be idle,” Cooper said. “We don’t know that. And we need technology to help us.”

Collaboration for the greater good

While Rheaply brainstormed how they might do their part to lessen the impact of the COVID-19 crisis, the C3 lab at Northwestern was working on the same problem.

Hammond and a team of seven graduate students put their artificial intelligence research on hold to look into the disconnect between medical equipment suppliers and caretakers like hospitals and shelters.

Then the Buffett Institute, in a move to encourage interdisciplinary collaboration, brought the computer science professor together on a call with Rheaply, along with representatives from Cook County and Northwestern Memorial Hospital.

While Rheaply’s regular platform is built to connect resources across parts of an organization, the new team recognized that the problem at hand was more specific. The C3 lab brought insights to the table — Hammond said they knew the Emergency Resource Exchange should favor specific searches over item-browsing, and supplied the exchange with a clear, controlled vocabulary for medical supplies.

“(Cooper) and I have some major philosophical overlap,” Hammond said. “In this, we’re completely aligned. And that is: a free platform that is made to be simple, fast, easy for people to communicate what they need and what they have.”

The C3 lab is also working on an information visualization called the COVID-19 Resource Map. The team will compile datasets from across the country, including the resource exchange, to show the changing supply needs as the pandemic progresses.

Both the map and the exchange will be free to use. Hammond said if people are thinking about making money now, not improving the greater good, they’re doing the wrong thing.