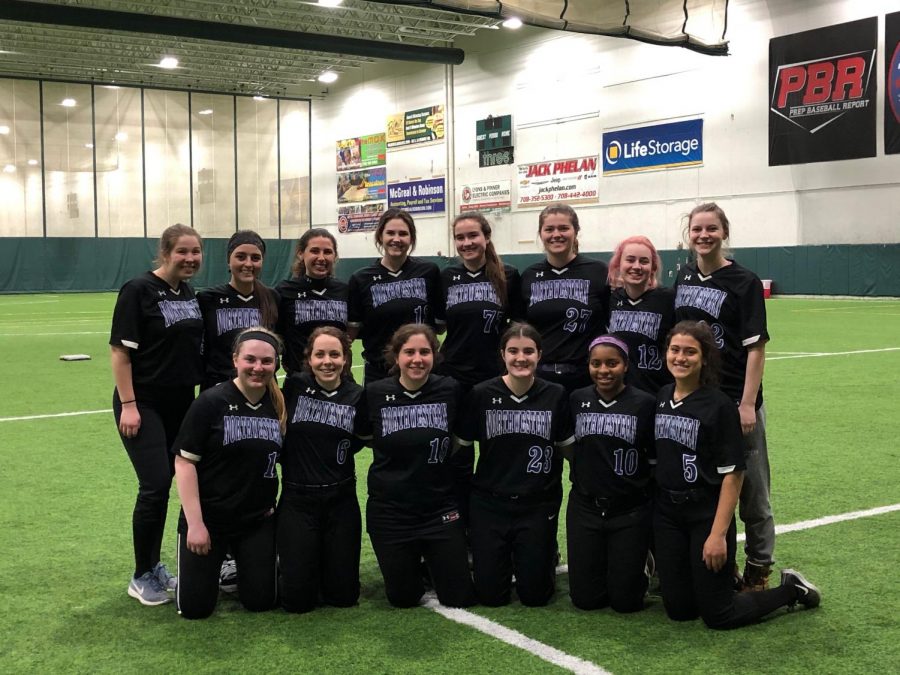 The Northwestern club softball team at a winter tournament. The team and its strong senior class will likely not play another game together this year due to COVID-19.

Just like its varsity counterpart, Northwestern club softball entered 2020 with high hopes after a historic 2019 season. And just like the varsity Wildcats, the team won’t see those hopes come to fruition.

Coming off its first-ever trip to the National Club Softball Association World Series, NU was looking to secure a return trip to Columbus, Georgia. With a strong, veteran roster — a seven-member senior class constituted the majority of their offensive production — it appeared that goal was well within reach.

But the novel coronavirus interrupted those plans. While the NCSA World Series is technically still scheduled for May, the remainder of the regular season and the regional playoffs have both been canceled. With NU holding classes remotely for the entirety of Spring Quarter, the team has been unable to practice together.

Northwestern suspended all club sports on March 13, coinciding with its decision to close all University recreation facilities. Several states have extended shelter-in-place orders into May, making even a postponed World Series seem unlikely.

Team co-presidents Tess Russell and Deborah Vainstein, both McCormick seniors, were the bearers of the bad news. Once the University announced on March 11 that it would start Spring Quarter online, team members started making plans to leave campus for Spring Break early. But Russell and Vainstein decided to hold a final practice on March 12, not knowing when or if that group would ever be together again.

“It was going to be our last (practice) ever,” Russell said. “It was very hard, but we decided to make that practice still go on, but be optional. Probably 70 percent of the girls were there, especially seniors. Having such a high percentage of seniors show up, that shows how much everyone in the senior class loved it and is going to miss it.”

That intense passion indicates how far the team has come in just a few short years. In fact, when Courtney Giebel (Weinberg ‘18) arrived on campus in 2014, Northwestern had no club softball team at all.

Giebel started the team with a friend during her sophomore year, then stayed on as a volunteer coach after graduating. Club sports at NU are entirely student-run — students are responsible for communicating with the University and scheduling games — but Giebel has been in charge of running practices and setting game lineups for the last two years.

“This group of seniors, I played with them when I was still in school,” Giebel said. “Then I saw them take over the team. I saw their passion, I got to see them when we got to nationals for the first time, which was amazing. I’ve built such strong connections with these girls.”

Giebel will start law school at the University of Miami in the fall, so her time with the team is likely finished as well. She said she is hoping one of the seniors will take over her role next year, but the abrupt ending was just as sad for her as it was for the seniors.

Vainstein said she saw the team when she visited campus as a prospective student, and said Giebel sticking around helped them get organized. Their roster size has been mostly consistent since Russell and Vainstein arrived, but Vainstein said their dedication has increased.

“I want this to continue to be a community people can look to for help in any aspect of their lives,” Vainstein said. “Most of the seniors were pretty upset. We use sports as an outlet for stress, and this is when you need that community the most. To have that taken away was a big bummer.”

NU was on track to advance to at least the Great Lakes South regional playoffs — they’d compiled a 7-2 record from the three series they played in the fall. A series at Notre Dame that had been scheduled for last weekend was likely to determine the conference champion.

The Big Ten Conference has suspended all organized team activities through May 4, but club sports are not subject to that ruling. Because there’s still an outside chance the World Series will take place, Giebel is still advising her players to keep working out.

“Everyone is still holding out hope that we will be able to go to Georgia in May,” Giebel said. “It’s most likely not going to happen, but being able to focus on that is helping them.”

Giebel said she recommends team members play catch with parents or siblings if they have that option. She said another alumna will be leading a Zoom workout with the full team next week to help them see each other and stay active.

The final practice was more lighthearted and less structured than usual, Rusell said. With no games to prepare for, the team just threw the ball around and made sure everyone was moving, enjoying each other’s company one last time.