Tekriwal: What COVID-19 did to the Sanders Campaign 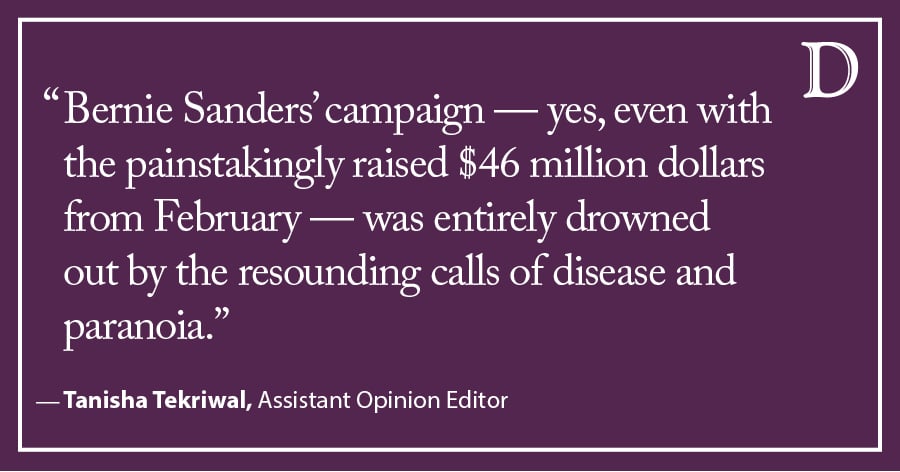 This is the first column in “The Politics of a Pandemic,” a series that aims to examine and critique some of the political and governmental reverberations of COVID-19.

Go to any news source, and the top story will likely be updates related to the novel coronavirus, or COVID-19. And briefly, perhaps that U.S. Sen. Bernie Sanders (I-Vt.) has suspended his presidential campaign.

This wasn’t the most significant political loss precipitated by the pandemic — no matter how deeply it was felt by the progressive end of the United States — but it is one of the more prominent ones.

Now, don’t get me wrong. This isn’t a column about whether or not Bernie Sanders was the right choice for the November ballot or even the Democratic nomination— that is an entirely different debate. Neither is this an attempt to convince anyone that the Bernie campaign was killed solely and single-handedly by the virus. It is, however, a column that hopes to scrutinize exactly why the coronavirus pandemic ensured that Sanders would drop out.

Bernie’s populist, trailblazing campaign stumbled a little after Super Tuesday but still left hope for his ardent followers, many of whom dove into even more desperate canvassing. While we hoped for a stunning recovery on March 10, it was effectively the date that the spotlight dimmed a little. Losing Michigan, I claim, was the most surprising defeat, occurring just around the time that the coronavirus tightened its grip on the United States. Within weeks, international students departed the country in droves, while colleges announcements of remote instruction followed, one after the other.

When something like our current disaster descends upon the world, media coverage of most other events is significantly reduced. And the places that already had a hard time competing with other news on mainstream feeds? They disappear. You’d think that Bernie’s call for universal healthcare in such a time would be a voice of reason, one people would trust in. And maybe people would have, had they heard.

Bernie Sanders’ campaign — yes, even with the painstakingly raised $46 million dollars from February — was entirely drowned out by the resounding calls of disease and paranoia. The groups Bernie wasn’t popular with — older generations, for example — needed his campaign to reach them, to remind them of possibility. The thing is, former Vice President Joe Biden wasn’t relying on people getting to know him or pushing his message out. People already know him and his manifesto: he was the guy who stood next to Obama for eight years.

This was made worse by the (very relative) leftward shift in President Trump’s policy, which has made Sanders’ otherwise reasonable proposals seem comparatively extreme. And despite every op-ed in the papers these days claiming that COVID-19 has ended Trump’s political career by exposing how weak a leader he is, I beg to differ. The only thing it has done is proven that he’s fickle: he claimed it was nothing but a flu at first, and now he expects people to be alarmed and cautious.

But what’s new? Trump’s always been mercurial — that hasn’t been a deterrent to his base; rather, it has inspired a similar impulsiveness. People are too terrified and overwhelmed by other news to pay attention to the specifics of how Trump screwed up Washington’s response to this pandemic, and so another inlet for Sanders to shine has been blocked by the timing and nature of the coronavirus.

There are many other phenomena that aren’t mentioned here — too many intangible factors that go into the making and unmaking of leaders, and though the campaign is suspended, the nature of Sanders’ grassroots movements keep it buoyed for a long time. I wanted people to know, however, that Bernie did not lose to Joe Biden — not entirely at least. There were many unforeseen and unprecedented happenings that gave us the 2020 Democratic nominee. And hey, Bernie Sanders is still on the ballot.

Tanisha Tekriwal is a Weinberg Freshman. She can be contacted at [email protected] If you would like to respond publicly to this op-ed, send a Letter to the Editor to [email protected] The views expressed in this piece do not necessarily reflect the views of all staff members of The Daily Northwestern.