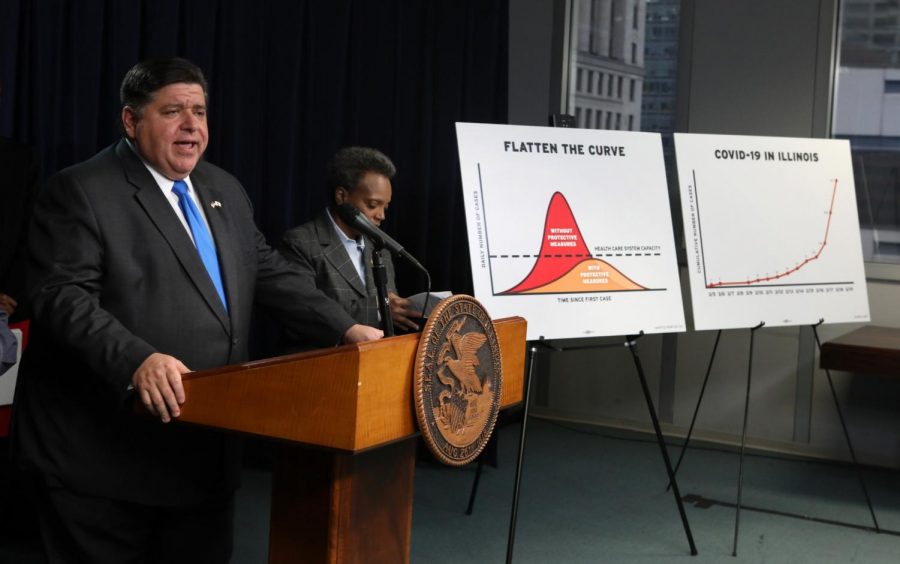 All 12.6 million Illinois residents are to “shelter in place” starting Saturday at 5 p.m. as part of the state’s latest effort to slow the COVID-19 outbreak, Gov J.B. Pritzker announced at a press conference.
Pritzker’s directive mandates that residents stay in their homes and stop all nonessential travel and will be in effect through April 7. The governor also prohibited public meetings of more than 10 people and halted all evictions.
“In some cases, I’m choosing between saving people’s lives and saving people’s livelihoods. But, ultimately, you can’t have a livelihood if you don’t have a life,” said Pritzker.
Pritzker said he is relying on residents to comply with the order but is asking law enforcement to “monitor for violations and take action — but that is not an option anyone prefers.”
Grocery stores, hospitals, pharmacies, gas stations and highways will remain open. Pritzker urged residents not to go out and purchase supplies in bulk.
The new order postpones the tentative reopening date of schools statewide from the end of March to April 8. Since he declared a state of emergency March 9, Pritzker had already banned sit-down dining and gatherings of 50 or more people.
“Our health care workers have been at the forefront of this pandemic,” said Chicago mayor Lori Lightfoot at the press conference. “We as a city must do everything we can to help them. Now is not the time for half measures, but preventative and proactive plans.”
Lightfoot announced all Chicago parks and libraries will close and CPS closures will be extended to April 21. She said the city is focusing on securing quarantine locations, bolstering hospital capacity and supporting health care workers.
In a Friday email, Northwestern University provost Jonathan Holloway asked staff, students and faculty to comply with the “stay-at-home” order.
According to the email, the University has already taken measures in line with the order and additional impact on University actions will be “minimal.” Holloway also noted students, staff and faculty should be able to leave campus freely.
Evanston city officials offered similar guidance in a Friday afternoon email, encouraging residents to continue to make pick-up and delivery food orders from local restaurants. In addition, the Lorraine H. Morton Civic Center is now closed to the public until further notice.
At Friday’s press conference, public health officials reported 585 confirmed cases of COVID-19 in Illinois.
The suburb of Oak Park was already implementing “shelter in place” practices through April 3. Violations in Oak Park are considered a violation of the Illinois Public Health Act, or a Class A misdemeanor, according to the Oak Park village order. Governors in California and New York have taken similar measures to curb the epidemic. New York is ordering nonessential workers to stay at home and California issued a shelter-in-place order.