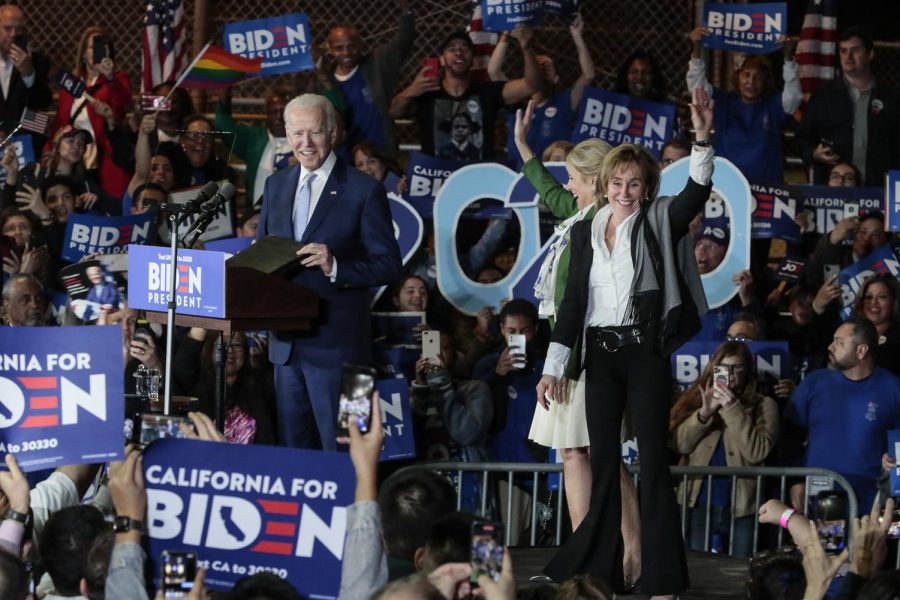 Democratic Presidential hopeful Joe Biden takes the stage with his wife, Jill, and sister, Valerie, right, during a campaign rally at the Baldwin Hills Recreation Center in Los Angeles on Tuesday, March 3, 2020. Biden declared victory in the Illinois presidential primary on March 17.

Biden secured the nomination with 62.71 percent of the suburban vote, with about 20 precincts still left to report. The Associated Press projected Biden the winner of the Illinois primary at around 7:30 p.m. on Tuesday. Additionally, U.S. Rep. Jan Schakowsky (D-Evantson) and U.S. Sen. Dick Durbin (D-Ill.) won the primary uncontested. Meanwhile, President Donald Trump secured the Republican Party nomination after winning the Florida and Illinois primaries.

As of 6 p.m., the 50-59 and 60-69 year old age demographics had the highest turnout in Suburban Cook County, with both groups having just over 21 percent turnout. Voters in the 17-29 age demographic voted in the single digits.

These discrepancies coincide with the nationwide wave of COVID-19, also known as the novel coronavirus, which has caused over 100 deaths in the United States, including one in Illinois. Ohio’s governor postponed his state’s primary, which was also supposed to be held Tuesday, until June. Gov. J.B. Pritzker refused to delay Illinois’ primary.

“It is not a time for political posturing,” Pritzker said in a news conference. “It is not a time to complain that you’re being asked to do uncomfortable things, to make hard choices, to go above and beyond in your responsibilities.”

The Cook County Clerk’s Office tried to limit the chances of coronavirus spread at the polls by encouraging mail-in and early voting. Chicago broke a World War II-era record with 118,000 mail-in ballots requested, according to The Chicago Tribune. If the ballots are postmarked by March 17, they will count in the primary.

Coronavirus played a prominent role on Election Day as well. Evanston City Clerk Devon Reid said Evanston tried to work with the Cook County Clerk’s Office to get sanitation supplies at all Evanston polling places, but that not every polling place got the supplies it needed.

“When we realized that Illinois COVID-19 was spreading quite rapidly, and that this was going to affect our elections, what we started doing was coordinating with the local health department here in Evanston and also the county clerk’s office,” Reid said. “They implied there would be hand sanitizer and disinfectant wipes at every polling location. There wasn’t — the county clerk’s office did make assurances that there would be — there seemed to be an issue with that as we went from polling place to polling place.”

Reid said the city sent some 30,000 phone blasts to remind residents to follow the COVID-19 guidelines outlined by the Centers for Disease Control and Prevention, wash hands before and after visiting the polling place and to bring their own hand sanitizer and wipes.

Carolyn Sayre said it was her third time working at a polling station — she said she was a little worried about coming out to her election site, Alice Millar Chapel, due to the virus, but she wanted to honor her commitment.

She and another election judge said no one had given the site any protective measures such as hand sanitizer. While some representatives at polling locations told The Daily large bottles of hand sanitizer were available — a few said they were provided by the city, others said they supplied the bottles themselves —- some locations like the Robert Crown Community Center said they had not received any. At Alice Millar Chapel, for example, only one mini-bottle was displayed on the precinct tables.

In an email to The Daily, Patrick Deignan, the city’s communications manager, wrote, “All Election Day polling locations and supplies are managed by the Cook County Clerk’s office.” The Cook County Clerk’s Office did not respond to a request for comment about the discrepancy between polling places.

At the Baker Park Fieldhouse, no election judge showed up to open the booths, so the county clerk’s office had to shift voters, Reid said. At the Fleetwood-Jourdain Community Center, Reid said voters had technical issues signing into the new voting machines, resulting in voters being turned away from the polls.

In addition, two polling locations were closed on short notice: The Merion and Westminster Place, both retirement communities. However, polling was still allowed to continue at the Levy Senior Center and Jane R. Perlman Apartments, despite the disease’s particular danger to the elderly.

After his successes in both Florida and Illinois, Biden livestreamed a speech congratulating his campaign, but also addressing the increasing concerns and panic associated with the novel coronavirus.

Biden emphasized the need for cooperation at every level of government to address the pandemic, one which he said has impacted both his campaign and the life of every American.

“We as a people are up to this challenge, we always have been,” Biden said. “I know we’ll answer this moment of crisis with the best you’ll find in all of us, because that’s what Americans have always done, and what we do. That’s who we are: ordinary people doing extraordinary things when the need arises.”