Provost Holloway announced all undergraduate finals would be optional. Some professors still plan to require them. 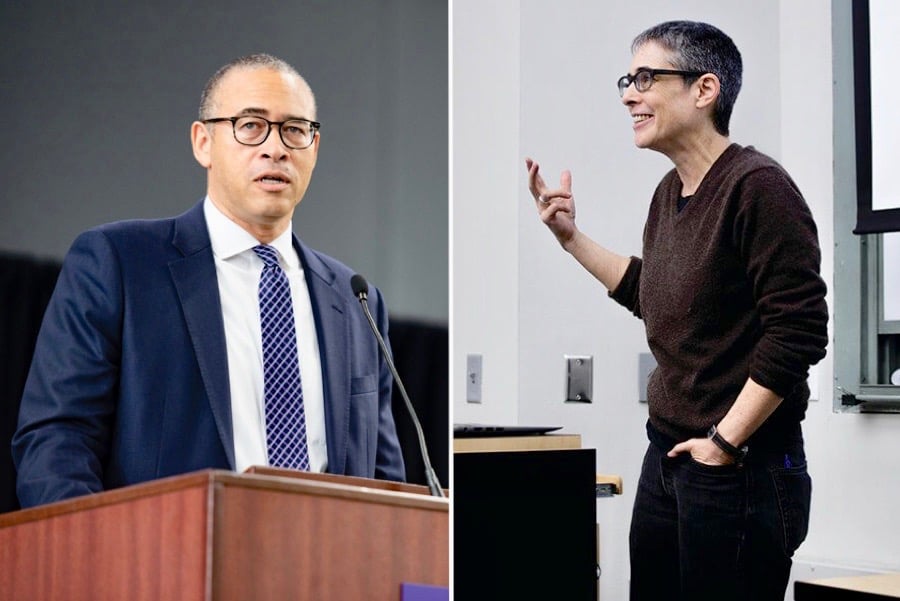 Provost Jonathan Holloway (left) and Political Science Prof. Jacqueline Stevens (right). Stevens is one of a number of faculty members who expressed concern over Holloway's announcement that all undergraduate finals would be optional.

After Northwestern’s Sunday night announcement that all undergraduate final assessments would be optional in light of growing concerns around the international outbreak of the novel coronavirus, some Northwestern professors are pushing back and emailing students in their classes to say they’re still requiring them.

According to the email signed by Provost Jonathan Holloway and incoming interim provost Kathleen Hagerty, all undergraduates who choose not to take their final exams for any reason would be assigned a grade based on their prior coursework to date. Their email cited “rapidly disintegrating” travel options, the two confirmed cases of COVID-19 on campus and “the incredible stress that everyone is trying to manage” as motivation for the change in policy.

Illinois had 95 confirmed cases of COVID-19 as of Monday morning, while more than 3,900 people across the country have tested positive for the virus, at least 68 of whom have died.

Statistics Prof. Martin Tanner was among the faculty members who emailed students Monday morning, saying he was still planning on requiring students to submit their take-home final assessment while modifying the assignment’s rubric to lower the amount of required work.

“You are strong,” Tanner wrote to students. “If God forbid, you get the virus, in all likelihood it will pass in a few days. But when this pandemic is over, you need to be able to look back and say ‘I was strong’. I am not going to make the final optional for your own good.”

He later reached out to students again to “deeply apologize for any anxiety” his initial message caused after the school’s dean contacted him, and announced that students would be able to opt not to complete their take-home assessment and receive a final grade. Tanner did not respond to multiple requests for comment.

Political science Prof. Jacqueline Stevens also sent students an announcement Monday morning saying she was “surprised” by Holloway and Hagerty’s email, while calling into question whether they were able to make the change for all undergraduate schools.

A Weinberg undergraduate page states that “neither the department chair nor the administration has the authority to alter an instructor’s grade” — but pertains specifically to submitted final grades. Neither the final examination policies page from the Registrar’s Office or the University’s Faculty Handbook also make clear whether faculty members have the sole authority to modify final assessments.

Weinberg School of Arts and Sciences dean Adrian Randolph and the Office of the Registrar did not respond to requests for comment.

Stevens, in a message she shared with The Daily, initially wrote to students Sunday around 6 p.m. saying she didn’t believe canceling the final paper was reasonable and pointing out that she canceled an in-person final exam earlier in the week out of concern for students’ health and wellness. She also extended the deadline for the course’s final paper.

In her Monday morning announcement, Stevens told students that if they decide not to submit their final papers — planned to be worth 40 percent of their grades after the in-person exam was canceled — they will not pass her course. Students who do submit a final paper and receive their final grade will be able to change from a letter grade to Pass/Fail if they desire, she wrote.

She also outlined that students who are currently sick and unable to complete their paper can receive an incomplete grade and submit at a later date.

“Again, I know this will disappoint some of you,” Stevens wrote. “But I would be disappointing all of you far more in the long run if I did not stand for principles and practices of academic freedom and the integrity of higher education.”

University spokesperson Jeri Ward said in a statement to The Daily that Randolph wrote to Stevens Monday morning asking her “to work within the parameters defined by the Provost last night regarding making final examinations and assessments optional.”

“While Dean Randolph agrees that Professor Stevens has the right to assign grades, she must do this in line with the University’s policies, as the Dean explained to her,” Ward said.

In email responses to students obtained by The Daily, Randolph also reminded them of the school’s grade dispute process, which begins with appealing to the department chair.

A student in Stevens’ course who The Daily granted anonymity due to their concerns over still being in the class questioned how Stevens’ expects them and other students to write a well-thought essay given the worldwide panic surrounding the novel coronavirus.

“The Provost’s email gave me hope,” the student said. “It’s just one less thing to worry about during this crisis. And to completely ignore my concerns right now, it’s terrible. When I got the email (from Stevens) today, it was extremely confusing, disheartening, unsettling and overwhelming.”

The student added that they “can’t even imagine” how international students or students of other marginalized backgrounds feel about having to complete the final assessment now.

“To be completely insensitive to our situations right now, I find that completely mind-boggling,” the student said.

But Stevens told The Daily she was one of the faculty members who proposed to Randolph’s office that students be given a Pass/Fail option for Winter Quarter courses.

“So I’m not unsympathetic to the concerns that the circumstances for some people may be too distracting and that they should have exceptional opportunity to change their grades… even after they see what their final grade is — and that’s really unusual,” Stevens said.

She also voiced concern with the scope of Holloway’s decision, pointing out that Northwestern’s move to make all undergraduate final assessments optional hasn’t been common across higher education.

Among Northwestern’s peer institutions, both the University of Chicago and a number of Big Ten schools announced last week that final exams would be administered online or as take-home exams, but did not cancel all undergraduate final assessments. The union representing faculty at the University of Illinois at Chicago also issued a statement last week with a number of expectations for the school’s administration including allowing “faculty to have full autonomy to decide, within the bounds of university policy, how to carry forth their courses.”

Ottino wrote that students who choose not to take their final exam would receive term grades based on work completed to date, and that taking a final would not result in a lower grade than one would’ve received without taking it.

“This solution is not perfect, but based on input we have received from many of you, we believe that this approach is the best option available to us at present,” Ottino wrote. “Of greatest importance is that you tend to your immediate needs, communicate with your families, and take the necessary steps to protect your health.”

School of Education and Social Policy dean David Figlio told The Daily he also had been encouraging — but not requiring — faculty members to cancel all undergraduate finals or make them optional.

In an email sent to a student Sunday night obtained by The Daily, Holloway wrote that “McCormick’s decision took central administration by surprise” and that administrators had been “scrambling to establish a new policy that brings equity to the exam situation.” The University-wide announcement later that night followed the steps taken by McCormick earlier in the day in making all undergraduate final assessments optional.

Guidance on the response in higher education to COVID-19 from the American Association of University Professors states that “decisions that affect curriculum, method of instruction, and those aspects of student life that relate to the educational process, should be made after consultation with the faculty and academic staff.”

Spanish and Portuguese Prof. Jorge Coronado, who is also the president of Northwestern’s chapter of the American Association of University Professors, told The Daily that upon reading Holloway’s message, his “initial reaction was confusion.”

Coronado expressed concern with the University’s central administration “dictating what we as instructors do in the classroom in terms of evaluating our students,” saying that while he wasn’t sure whether faculty members were involved in coming to the decision, it would’ve been essential for them to be included in the process.

While Coronado said he’s empathetic to students’ concerns around the COVID-19 pandemic, he added that non-in-person assessments like final papers wouldn’t place them at risk.

In their letter to Schapiro, students wrote that the virus’ ongoing outbreak has created disproportionate stress and anxiety in particular for first-generation and low-income students, among those of other marginalized backgrounds, making completing final assessments challenging during an “extremely emotional and tumultuous time.”

“At this point in time, students are closely following both local and global coronavirus developments, worrying about the health of their friends and family as well as constantly revising plans for spring break,” students wrote. “Given such circumstances, requiring students to juggle the resultant stress and anxiety in addition to studying for upcoming final exams is a burden too great to reasonably ask.”