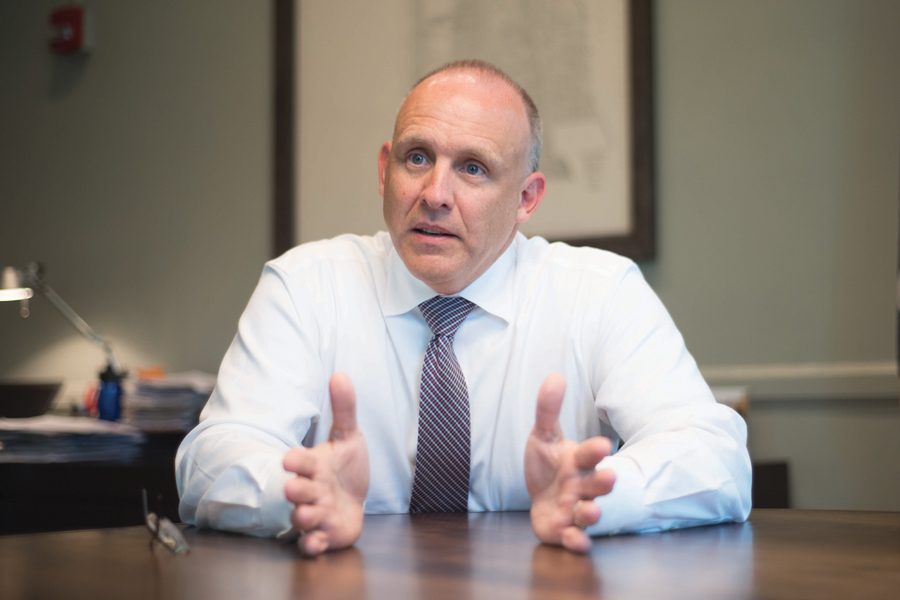 Mayor Steve Hagerty in his office.

Mayor Steve Hagerty declared a local state of emergency in a Sunday evening update, citing a number of several recent developments as motivation.

In his email, Hagerty said two Evanston residents have tested positive for COVID-19, the disease caused by what’s commonly known as the novel coronavirus. Both are self-isolating, the update stated, and are being monitored by the Health and Human Services Department, but it’s unclear from the email whether the two cases are the same that have been reported on Northwestern’s Evanston campus.

A spokesperson from Northwestern was not able to confirm whether they were the same cases.

The Health and Human Services Department is also conducting an investigation to find who else has been in direct contact with the two confirmed cases, and those people will be required to self-isolate and report to the department daily. Hagerty added that residents who came in contact with non-Evanston residents who have tested positive for COVID-19 will also be required to self-isolate for two weeks.

This decision comes in the wake of President Donald Trump’s announcement of a national state of emergency on Friday, and earlier Sunday afternoon Gov. J.B. Pritzker closed all Illinois restaurants and bars — with the exception of curbside pick-up, delivery and drive-thru orders — from the end of March 16 until March 30.

“In light of these developments and the growing threat to our community, I took the action today of formally declaring a local state of emergency, a proactive measure which will enhance our City’s ability to respond to this infectious disease,” Hagerty said in the update.

Evanston has also activated its Emergency Operations Center, which is led by a Unified Command Team consisting of Hagerty, the acting city manager, the health and human services director, the police and fire chiefs and the city’s emergency manager. The EOC should allow for greater coordination and management to respond to COVID-19.

In addition, Hagerty created an Evanston Coronavirus Task Force that consists of various religious, education, government, nonprofit and other community leaders. The members of the task force are expected to disseminate information to their respective communities and share concerns with the Unified Command Team.

Hagerty said the city should withstand the virus if residents follow the advice of the Illinois Department of Public Health and the Centers for Disease Control and Prevention, and help one another through the crisis.

“I know this is an unusual, uncertain, and frightening time,” Hagerty said. “Having spent my career helping communities prepare for, respond to, and recover from disasters, I can say that the social fabric of Evanston is strong enough to withstand this threat.”