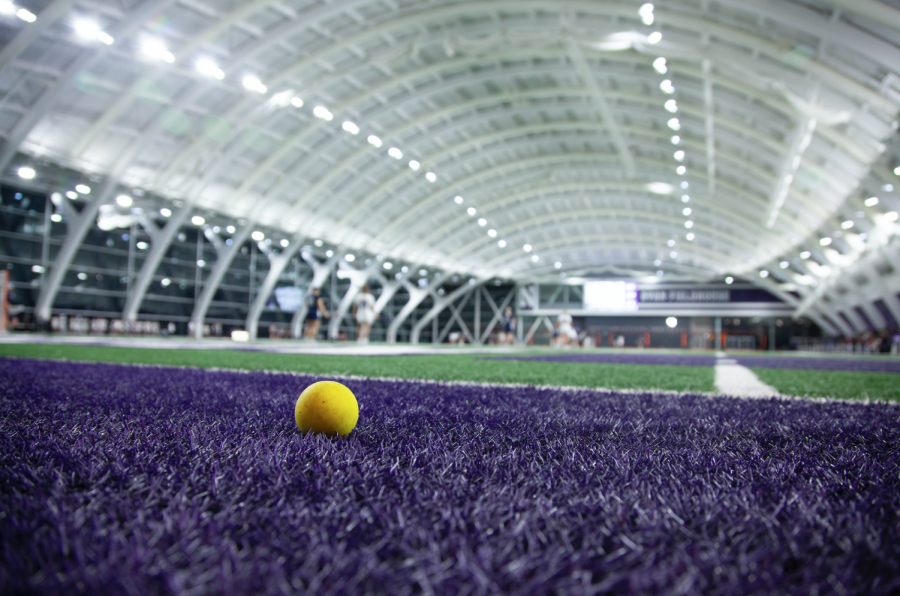 The interior of Ryan Fieldhouse. Northwestern has said the athletic department would work in “lockstep” with the University to determine decisions going forward.

The international outbreak of COVID-19, the disease caused by what’s commonly known as the novel coronavirus, continues to impact the college sports scene, and Thursday afternoon, the fallout expanded far beyond basketball.

The NCAA and the Big Ten announced they would cancel all upcoming games, including those that take place after the academic year concludes. The conference also announced a memorandum on all on- and off-campus recruiting efforts.

Northwestern had 13 sports in season, and now those seasons are over. Women’s basketball was expected to earn a top-four seed and host NCAA Tournament games at Welsh-Ryan Arena next week, and those games will no longer occur.
The Big Ten said in a statement that the main priority of the Big Ten Conference continues to be “the health, safety and wellness of our student-athletes, coaches, administrators, fans and media as we continue to monitor all developing and relevant information on the COVID-19 virus.”
The conference is taking time to work with medical experts and institutional leadership to “determine next steps” related to the COVID-19 pandemic, the statement said. Northwestern added in a statement that it would refund all season and single game tickets for baseball, softball and lacrosse through the athletic department’s ticket office.

As the day progressed, the situation escalated quickly for the Big Ten and the NCAA.

Heading into the second day of the men’s Big Ten Tournament, Michigan and Rutgers took the floor Thursday morning to warm up for their noon game. At 10:40, the players were going through layup lines.

Big Ten commissioner Kevin Warren said he spent the morning gathering as much information as possible before making a swift decision.

“It was really important to me that I had an opportunity to talk to all of our chancellors, presidents, athletic directors and other key individuals on our campuses to discuss this issue,” Warren said at a press conference Thursday. “These are big decisions. They have major ramifications as far as scheduling, all the other different things. So those things take time to be able to do it with people’s schedules. You don’t want to rush these decisions. It would have been great if it could have been two hours earlier this morning, but it wasn’t.”

At the end of that press conference, Warren said he would spend the rest of the afternoon deciding whether other Big Ten events would continue, including this week’s Big Ten Men’s Ice Hockey Tournament.

At 3:20 p.m., the conference announced no more athletic competitions would take place until August.

“One of the things I want to make sure that I do is rely on the information and guidance from individuals in our conference,” Warren said. “Also it’s just to make sure we are thinking what’s best for our student-athletes.”

Northwestern has said the athletic department would work in “lockstep” with the University to determine decisions going forward.

But Northwestern’s seniors could be uniquely affected by the decision.

The baseball team has eight seniors on the roster and eight incoming freshmen in Northwestern’s class of 2024. Every NCAA team will have a limited number of scholarships, so having the entire senior class redshirt might impact the incoming freshman class.

This may also raise concerns for lacrosse’s seven seniors, softball’s four seniors or the upperclassmen on the tennis, golf or cross country teams.