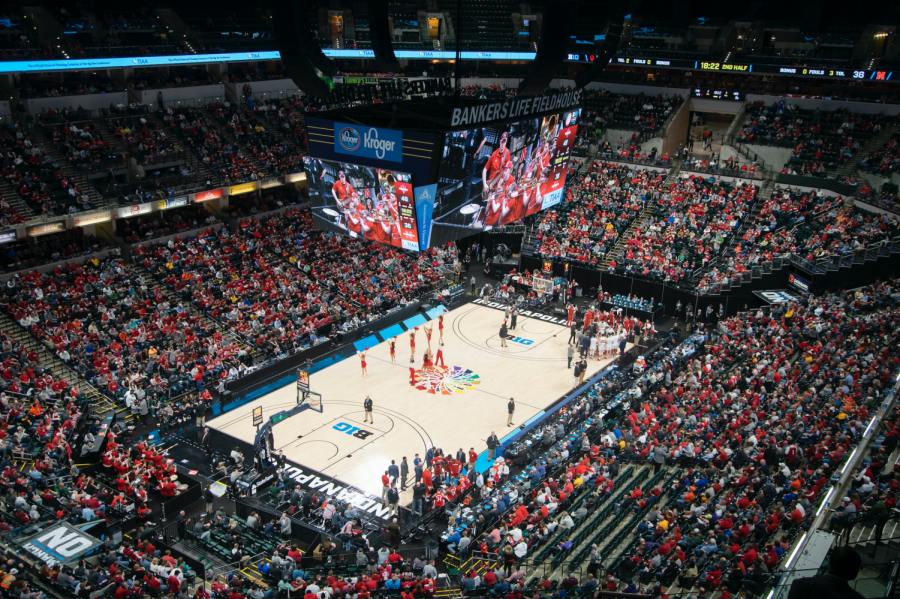 The Big Ten Men's Basketball Tournament at Bankers Life Fieldhouse. Northwestern athletics has no update on the status of its upcoming athletic events.

As COVID-19, also known as the novel coronavirus, prompts the cancelation of several NCAA men’s basketball conference tournaments and the suspension of the NBA season, Northwestern athletics has no update on the status of its upcoming athletic events.

Here is what we know about the impact COVID-19 is having on Northwestern athletics:

After finishing the season 26-4 as Big Ten champions, Northwestern is expected to earn a top-four seed in the NCAA Tournament. As a result, the Wildcats would host the first two rounds at Welsh-Ryan Arena.

Now those games are scheduled to take place without fans.

NCAA president Mark Emmert said the organization is continuing to monitor the outbreak of COVID-19 in communication with health officials.

“Based on their advice and my discussions with the NCAA board of governors, I have made the decision to conduct our upcoming championship events, including the Division I men’s and women’s basketball tournaments, with only essential staff and limited family attendance,” Emmert said in a statement. “While I understand how disappointing this is for all fans of our sports, my decision is based on the current understanding of how COVID-19 is progressing in the United States.”

Northwestern has a game scheduled against Penn State on Friday in Nashville. That contest is still expected to happen, but attendance will be limited to “student-athletes, coaches, event staff, essential team and Conference staff, TV network partners, credentialed media, and immediate family members of the participating teams.”

Northwestern’s game at Penn on March 29 has been canceled. The Ivy League announced Wednesday that all of its spring sports seasons would not take place.

“With further developments in the outbreak of COVID-19, the Ivy League Presidents are announcing their unanimous decision to cancel all spring athletics practice and competition through the remainder of the academic year,” the Ivy League said in a statement.

Northwestern is expected to have seven members of the swim team competing Thursday at the NCAA Zone Qualifiers. Northwestern has its first home athletic contest scheduled for Friday, a baseball game against Kent State at 11 a.m. at Miller Park.

Northwestern also has cross country and men’s and women’s tennis matches scheduled for this weekend.

“The main priority of the Big Ten Conference is to ensure the safety of our student-athletes, coaches, administrators, fans and media as we continue to monitor all relevant information on the COVID-19 virus on a daily basis,” the Big Ten said in a statement.

According to Sports Illustrated’s Ross Dellenger, all SEC athletic events have been canceled through the month of March.

At Bankers Life Fieldhouse on Wednesday night in Indianapolis, hundreds of fans lined up outside the concourse waiting to enter the arena when the gates were scheduled to open at 5 o’clock p.m. Some fans had been waiting for more than four hours so they could get into the arena as early as possible for Northwestern’s game against Minnesota.

But when the clock struck five, no one moved.

At 4:33 p.m. the NCAA announced the men’s and women’s basketball tournaments would take place “with only essential staff and limited family attendance” because of concerns over COVID-19. The Big Ten would be the first conference to open its arena to fans since the NCAA’s announcement.

“I think everybody is just curious and concerned to get more information to figure out what’s going to be best so we can stop this thing and not let it become worse,” Northwestern head coach Chris Collins said Wednesday night. “Obviously, everybody wants what’s right. If there’s a health issue that’s going to impact the people in our vicinity, globally, whatever it is, we’ve got to take care of that.”

Northwestern had practice scheduled for Thursday, but the team’s media availability was canceled.

“In consideration of today’s announcements by Northwestern University, the Big Ten Conference and the NCAA regarding COVID-19, information about the remaining spring practice schedule and media availabilities will be communicated when those details are available,” Northwestern athletics said in a statement.

Wednesday, Michigan and Ohio State canceled their spring football games, and both programs announced they would be halting recruiting. According to The Athletic’s Ari Wasserman, Ohio State is discussing canceling spring practice.