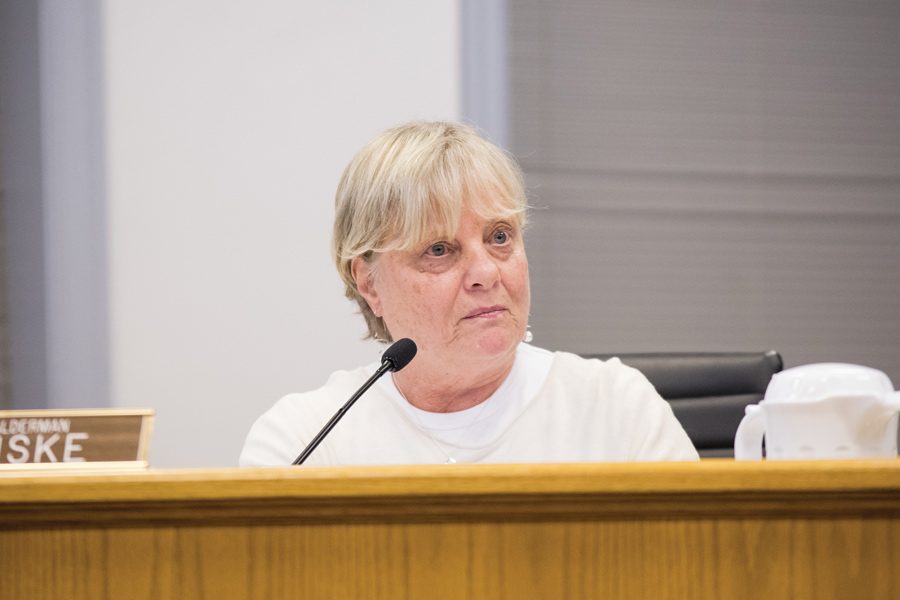 Ald. Judy Fiske (1st). Fiske said the renewed effort surrounding the St. Athanasius School parking issue is worth it if the city can protect the property values of the school’s neighbors.

City Council voted Monday to table the issue surrounding the expansion of parking at Saint Athanasius School until April 13.

This issue was previously discussed by the council at the Feb. 24 meeting and resulted in a 4-4 tie. Mayor Steve Hagerty recused himself, instead of breaking the tie, because one of his children goes to the school. Aldermen are concerned that approving St. Athanasius’s request to expand its parking into the street would negatively affect residents in the surrounding area.

Ald. Peter Braithwaite (2nd) said Ald. Eleanor Revelle (7th) was considering concerns from residents of that area, so Braithwaite proposed to allow two more weeks before a final decision on the parking issue to see if their issues could be addressed.

City staff recommended approval of the ordinance, which would allow for more parking around the school. However, Evanston’s Zoning Board of Appeals said the proposal does not meet all the standards for special use in this district, and so it did not recommend approval.

Ald. Judy Fiske (1st) said she would not vote for the ordinance as it is currently written, but would support more time for the affected residents to be included in the conversation.

“I can tell you that the creation of a parking lot where there used to be residential or a side yard or something like that basically sucks the happiness out of the adjoining property owners,” Fiske said.

Ald. Cicely Fleming (9th) said she would still vote against the ordinance.

“While I appreciate you all wanting to go back to the drawing board, I would hope that all that would have been hashed out before you brought it to us the first time and was in a better place to have more council support,” Fleming said.

Braithwaite said the goal is not to vote on the issue Monday, but to allow time to find a better solution.

The motion to table the ordinance until the council’s first April meeting passed 5-1, with only Fleming voting against it.

Aldermen agreed that this should be on the agenda so residents affected by the issue can know about it and make public comments.

“It’s worth the effort and if we can protect the property values of the surrounding neighbors I think that’s very important,” Fiske said.

– Saint Athanasius School not to be granted permission to alter parking