“If we don’t get it, shut it down:” Fossil Free Northwestern blocks Sheridan Road in call for divestment 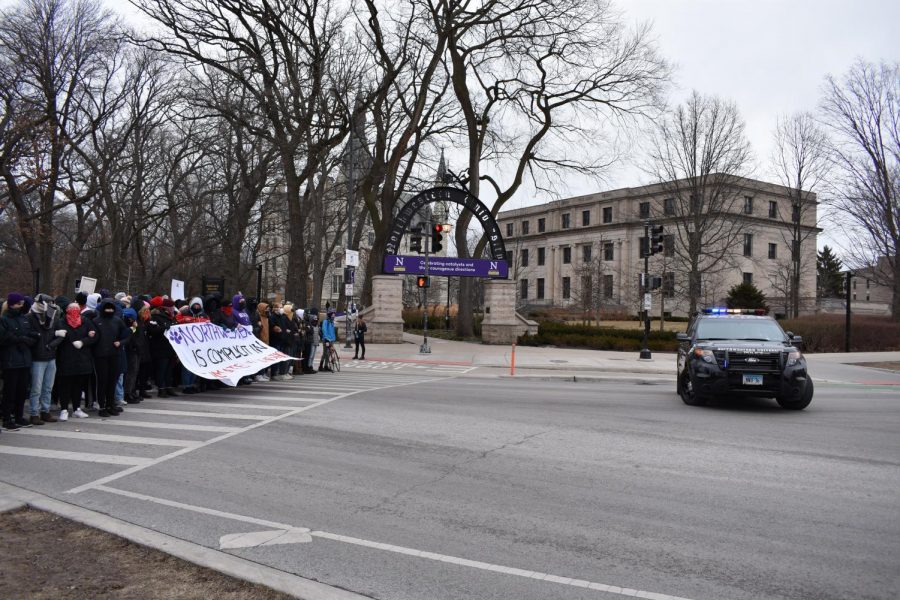 At around 9 a.m. Friday morning, over 60 protesters blocked Sheridan Road to raise awareness for climate injustice and attempt to force more open communication between the Board of Trustees and Fossil Free Northwestern.

More than 60 protesters joined together on Friday morning and blocked the intersection of Sheridan Road and Chicago Avenue, continuing their demand for Northwestern’s Board of Trustees to divest from any of the top 100 coal and oil and gas companies.

The protest comes in the wake of the Board’s decision to not divest from endowment investments in fossil fuel holdings per Fossil Free NU’s submitted guidelines.

A student protester and member of Fossil Free NU, who The Daily granted anonymity to due to their safety-related concerns, said the group chose Sheridan for the site of the blockade because it connected the Evanston campus to the Chicago campus, where the Board was meeting that day. Protesters chanted “Disclose, divest or this will be our death,” and asked if NU’s investments were worth the University’s “soul,” in an effort to get the Board to recognize their concerns about climate injustice.

“We also wanted to show the Board that they cannot hide from the Northwestern community,” the student wrote in an email to the Daily. “As much as they may try to maintain bureaucratic distance between the general population and themselves, we will continue to hold them publicly accountable.”

Around 9:03 a.m., protesters gathered near the Arch, making their way across the busy intersection two minutes later. With masks obscuring their faces, the protesters interlinked their arms and faced both sides of the road. In the center of the group was a banner that read, “Northwestern is Complicit in Climate Injustice.”

The protesters, largely consisting of students and some faculty, said they would remain on the road until their demands were met. Among the group’s demands were to speak with Martin over the phone.

Shortly after the group first made it onto Sheridan, University Police and Evanston Police Department officers arrived on the scene. They worked to block the street and reroute traffic, but did not break apart the protest.

During the more than hour and a half protest, EPD officers warned Fossil Free NU’s police liaison, Medill sophomore and designer for The Daily Catherine Buchaniec, that if the protest were to continue then it would be possible for a SWAT team to be called to break up the group.

Toward the end of the protest, EPD parked a police van near to the protesters. A box of zip ties was visible to the group and onlookers. Officers at the scene also attempted to take photos of the protesters, but the group attempted to evade this by turning around and keeping their face coverings on. Despite officers’ attempts, protesters still remained on the street and chanted for divestment and for the University to give them phone access to members on the Board.

The police liaison was told that NU would be unable to get Board chairman J. Landis Martin on the phone. Following this, officers moved the police van to be directly in front of the blockade.

The group then dispersed as a unit off of Sheridan. Officers followed students off the sidewalk until they fully dispersed, Buchaniec said.

The student added in their email that Fossil Free NU decided to dissolve its blockade because they did not want to “nationally embarrass this University” by having peaceful protesters being arrested.

SESP freshman Mikenzie Roberts watched the protest on the sidewalk and said she admired how organized the demonstration was. Part of her wanted to join in as well, she said.

“I’m almost moved to tears seeing it — I fully support this,” Roberts said.

While Roberts didn’t participate, several students, including representatives of NU Graduate Workers, did join over the span of the protest to show solidarity

The Board’s “lack of transparency” during the proposal’s submission process made communication difficult and unproductive for the group, the Fossil Free NU member said.

“We saw this demonstration as the only way to attempt clear, direct communication with the Board of Trustees. We knew the Board was gathering in person today, a rare occurrence, and hoped to use this rare opportunity to get them to retract their harmful, outdated decision on our proposal,” they said in an email to the Daily.

University spokesman Jon Yates confirmed Martin was at a Board meeting on the Chicago campus that Friday. He added that from 2014 to 2017, the Board met with members of Fossil Free NU on several occasions.

The Board’s investment committee chair offered to meet with Fossil Free NU and is “awaiting a response,” Yates said.

“The Board of Trustees has encouraged and supported University efforts to reduce our environmental impact and carbon footprint,” Yates said in an email to the Daily. “The Investment Committee would appreciate engaging with students on a constructive path forward and ongoing dialogue.”

The student questioned if the proposed meeting with the Investment Committee would even take place, and they said they feared this meeting would be “another bureaucratic roadblock” for direct communication between students and the Board.

With the protest lasting an hour and forty minutes, the Fossil Free NU member said their work is far from over.

“We are not silenced. We have not given up. We will continue to empower our voices through community building and demonstration,” they wrote.