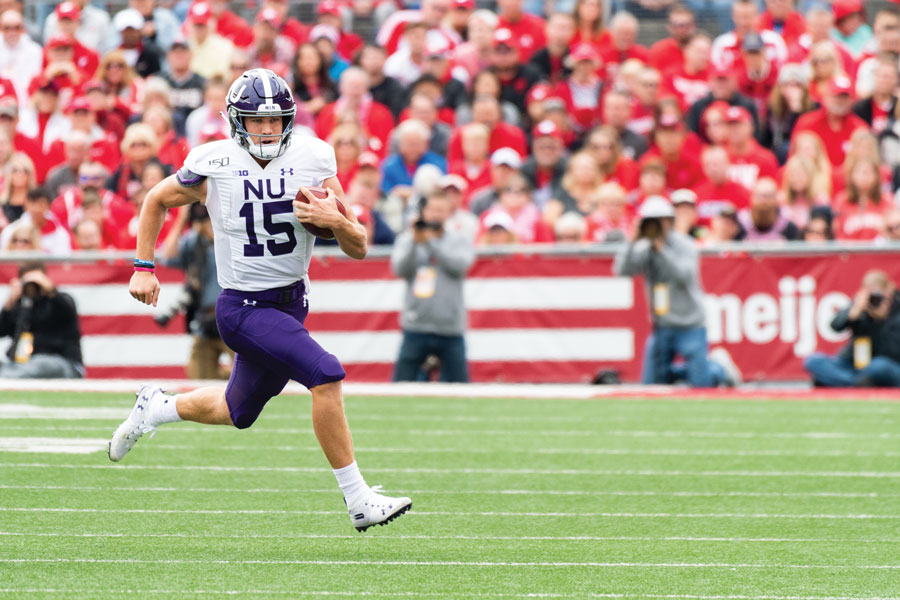 Hunter Johnson runs the ball. The junior quarterback will look to improve after a dismal 2019 season.

After having a 2019 season to forget at Northwestern, the quarterback said he isn’t worried about all of the game-ending injuries, the losses and the interceptions that defined his sophomore campaign.

“There’s good years and bad years,” Johnson said. “I’m just moving on, everything about it. There’s obviously some things I’m going to take from it, but you can’t move forward looking back. I’m not looking back.”

New offensive coordinator Mike Bajakian is helping Johnson turn the page. After the highly-touted transfer from Clemson finished last season with just one touchdown and four interceptions in six games, Bajakian had a simple message for Johnson when he was hired to coach the Wildcats.

Bajakian wants Johnson to be more decisive, even if he’s wrong.

“If I think I know the answer, (Bajakian) wants me to yell it out,” Johnson said. “Be confident, and if you’re wrong, then he’ll let you know. But he’d rather us go for it and be wrong than just go through the motions.”

Coach Pat Fitzgerald admitted he needs to do a better job helping Johnson be more confident during the season.

Johnson felt pressure all last year as the assumed replacement to Clayton Thorson, the winningest quarterback in NU history.

The Indiana native left all three of his final games of the 2019 season with an injury. His sophomore season ended with a 10-yard sack against No. 10 Minnesota in November, and Johnson finished the year with a 46.3 completion percentage.

“What comes with that locomotive is the hype,” Fitzgerald said. “It’s unrealistic to expect a lot right away because it’s new relationships, a new offense, new school. It’s a lot of stuff that goes on.”

Heading into his third year with the program, Johnson knows he needs to play better to claim the starting spot in September.

Too often last season, Johnson snapped the ball without understanding what the offensive line was doing on the play. So after pass rushers identified the easiest routes to the quarterback, Johnson was helpless in the pocket.

“When you don’t know where your weaknesses are, you get your lips knocked off,” Fitzgerald said. “There were a couple hits last year where you just go ‘ugh,’ but you’ve got to know where protections are. That’s part of system knowledge and execution.”

Bajakian’s new offense may give Johnson an extra advantage in the quarterback competition this year against graduate TJ Green, senior Aidan Smith and junior Andrew Marty.

Last year, Johnson struggled learning former offensive coordinator Mick McCall’s offense, and Fitzgerald said Johnson’s command of the offense wasn’t as good as Green’s. But in 2020, all of the quarterbacks will have to learn a new system and will be on an equal ground in that area.

Johnson said he’s excited for another quarterback competition and learned from his experience last year.

“That’s just part of football. It’s a good group of guys, and we’re excited to just start playing again,” Johnson said. “It’s really not about us competing against each other, it’s about the whole unit getting on the same page.“