Profile: Students take their comedy Out of DaBox 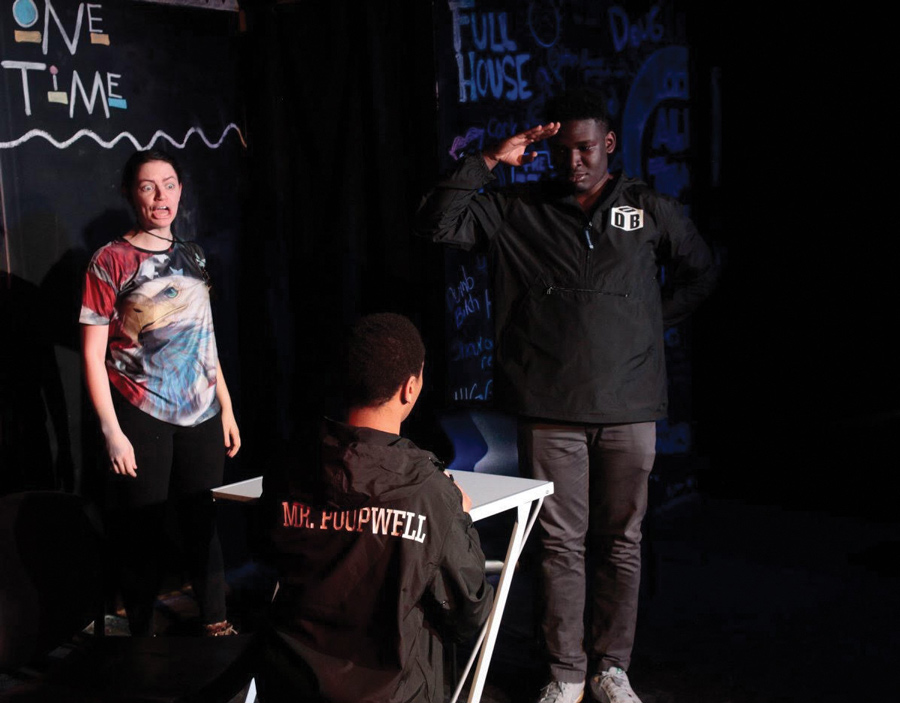 Members of OutDaBox perform. ODB is a multicultural comedy group that provides a space to marginalized students to practice and perform sketches and improv.

When Communication senior Avery Powell first came to Northwestern, he auditioned for OutDaBox.

Powell was accepted as a writer, but he didn’t act in a sketch in the fall. In the spring, a player dropped out, and the directors offered Powell the chance to be in their spring show.

ODB is a multicultural sketch and improv group at Northwestern. The group has traditionally focused on live comedy, but this quarter, they have begun a new initiative filming sketch, and completed filming for their first sketch on Saturday.

In one form or another, ODB has been active on Northwestern’s campus for over 35 years. The group sprung out of The ODB Show, a revue produced by a former African American Theater Ensemble in the mid-70s. In the 80s, the cast of the revue split from the board and began operating as an individual group.

Powell, who serves as ODB’s president, said as a black student on campus, the comedy scene can be alienating because of how white it is. There are very few black students involved within the community, and typically there are only five or so black comedians performing in improv groups at any given time. ODB offers Powell the ability to write about representation and inclusion thoughtfully, but present it in a humorous way.

“You have a space to not only be a black performer but perform to a diverse audience who responds in an incredibly different way,” Powell said. “It’s a space to be yourself, not a minority.”

Powell said the group has been discussing filming sketches since the summer. The conversations started because the leadership wanted to find a way to bring ODB into a newer age and take more advantage of modern media to promote their content. To get funding, the group went to the Radio, Television and Film department, and received funding from them for the first time.

The members are taking the process step-by-step, but the plan is to release eight sketches by the end of the year. Five of them will be full length, two to two and a half minute sketches, and three will be “blackouts,” sketches that are thirty seconds or less. The group is working on developing a new website to host these sketches, as well as a podcast they are developing where different members of ODB will take turns discussing a variety of topics in a talk show format.

Communication sophomore Emnet Abera serves as the producer for ODB’s live shows and filmed sketches. She joined after attending ODB’s spring live show, which she said was the largest gathering of people of color she’s ever seen on a stage. She said she bonded with the members of the group quickly, far more than any other student group she has been in, and already feels very connected to the organization.

Abera said she thinks the move to begin filming content makes sense for the organization in part because it provides the members with more tangible achievements to show to prospective employers. Abera said because ODB is focused on uplifting POC comedians, documenting their voices was a natural extension for the organization.

“We’re trying to lift up the voices of POC, so we were like ‘why not film sketches, we have so much content that we don’t get to share with the rest of the student body,’” Abera said. “And it’s a bonus that it’s also helping many POC writers and filmmakers find a space on campus where they can do what they love and be supported by so many other POC.”

Communication senior and ODB co-director Dora Grossman-Weir said the process is a learning curve for many members of the group, including her, because it’s such a new initiative, and they are understanding if the projected schedule changes. During the shoot of the first sketch, Grossman-Weir served as director, and it was the first time she had ever directed a film sketch before; at the same time, everyone was dedicated and efficient, and the shoot wrapped an hour early.

Development and individual growth in general is something ODB heavily focuses on, according to Grossman-Weir. Many members join the group with limited comedy experience and are chosen because they are enthusiastic and offer a fresh perspective.

“When I got in as a player my freshman year, I was the only freshman they took at the time,” Grossman-Weir said, “and I remember at first feeling so nervous, and inadequate, and so quickly the people in the room fostered the idea that I deserved to be there and was just as valuable in the room as everyone there. And I feel like imparting that on young improvisers from this side of things is so valuable.”

Powell said he is slightly anxious about the future of the new initiatives he’s helped introduce, because the current membership of ODB is very senior-heavy. In spite of this, however, he is excited to see what the underclassmen in ODB achieve once he graduates, confident in their ability to overcome the challenges of implementing these new systems, because being on ODB helped him learn and grow as a professional and as a person.

“I’ve learned so much about how to work with other people and what’s important from ODB,” Powell said. “I was able to think about how representation matters in a way that my brain works, which is like humor and comedy and being ridiculous. Because that matters too, and how do you work to make sure you’re doing it right? You know, because it’s not stupid, it’s silly but it’s not stupid.”