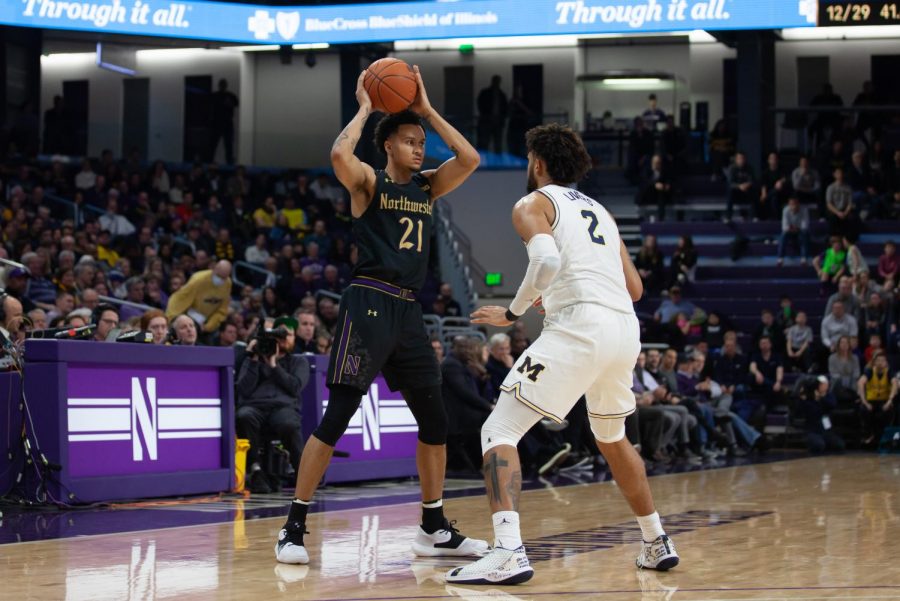 A.J. Turner looks to make a pass. Turner and NU’s two other seniors, graduate Pat Spencer and redshirt junior Tino Malnati, will be honored on Senior Day against No. 20 Penn State.

Chris Collins has emphasized the youth of this year’s Northwestern squad all season. He’s not wrong to do so — 11 of the Wildcats’ roster are underclassmen — but the program still has three players to honor on Senior Day against No. 20 Penn State.

Spencer joined the program this season after four seasons of college lacrosse at Loyola Maryland. He won the Tewaaraton Award, given annually to the best college lacrosse player, in his final season, and holds the NCAA record for assists, but Spencer loved basketball and wanted to play.

“Coach really loved my competitive edge,” said Spencer early in the season about why he chose NU. “That’s something we both clicked on. I loved his edge. The ability to play at the Big Ten level and use that edge was really appealing to me, and having a young group and being able to make an impact right away was really important to me.”

This season, Spencer exceeded expectations. He started at point guard in all but two games this season and became the Cats’ second-highest scorer, and has almost double as many assists as the next-highest player on the team. Spencer showed remarkable athleticism transitioning from lacrosse to basketball, and many of his skills transferred better than NU’s coaching staff anticipated.

Turner joined the program two seasons ago after transferring from Boston College. The Michigan native started only three games this season, but was a consistent rotation player, though not as strong a scorer as he was last season. As one of the team’s most experienced players, Turner often came in to provide a spark when the Cats struggled.

Malnati, a walk-on, was not a regular part of the rotation. He played in eight games this season and scored just two points in his career. But Malnati was named one of two team captains at the beginning of the season, and is the only one of the three seniors to have started and ended his career at NU. He is also currently the only active player from the Cats’ tournament season.

The three seniors designed their Senior Day “By the Players” uniforms, per a three-season-long tradition. The new uniforms are purple and incorporate elements of the Chicago skyline and other attributes of the city.

NU has only one rising senior — junior forward Anthony Gaines, who missed significant time this season and is expected to redshirt. Next year’s team will, however, have more experienced juniors: current sophomore forwards Pete Nance and Miller Kopp to fill in the hole Spencer, Turner and Malnati’s departures will leave.

“They’ve been a resilient bunch,” Collins said. “Every time they were close to staying on the mat, they keep getting up and wanting to fight. I know, knowing the character of the guys in the locker room, that they’re going to finish this thing off right.”