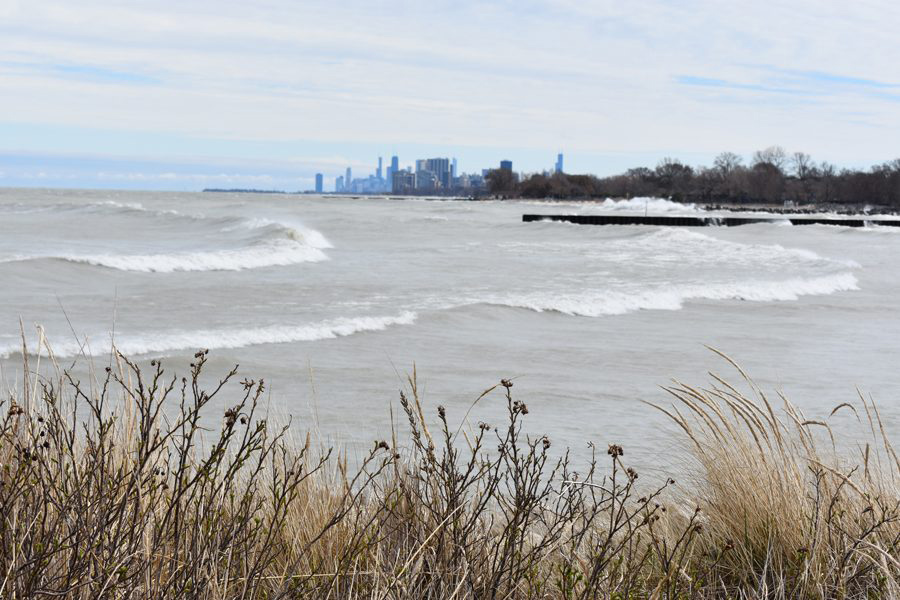 This estimate accounts for the redoing of the rock wall that lines the town’s lakefront by putting sheet piling behind it and restoring the revetment. The city is having to look into lakefront stabilization because of rising lake levels and storm events, said Lara Biggs, Engineering and Capital Planning Bureau Chief. Biggs said at the Feb. 10 council meeting that Lake Michigan levels were at a record high for February, and are expected to increase even more this summer.

Biggs said rocks in Evanston’s revetment have shifted in isolated locations, confirmed by an Army Corps of Engineers inspection. Both a January storm and a February high-wave event increased the need for a lakefront stabilization effort due to resulting damage.

At the Feb. 24 City Council meeting, the Administration and Public Works Committee approved an agreement with the SmithGroup coastal engineering sect for $74,500. Biggs said the first thing that needs to be done is the completion of a shoreline condition assessment.

“The situation is really dynamic,” Biggs said. “We’re seeing changes to the lakefront infrastructure, the rock walls, and the beaches that are changing week by week. However, we need to have a solid review of what’s out there, and what our range of options are to deal with the problems.”

The SmithGroup’s assessment will only include publicly-owned property and a representative from the city will be present for all assessments. The assessment should take place over the next three months, ending in late May.

Once the assessment is complete, the recommendations will be brought to City Council, who will decide what to implement. Dave Stoneback, director of the city’s Public Works Agency, said the council will have to take into account how much the city can afford.

“Because it’s not a budgeted project right now, it will be necessary to have a conversation about how much people feel comfortable spending of unbudgeted funds,” Biggs said.

Biggs, Kull and Stoneback all expressed uncertainty in the city’s ability to afford stabilization projects, at least in the short term, although the full costs won’t be known until the assessment is complete.

All three, however, also emphasized that shoreline erosion, rising water levels and destabilization of the lakefront’s revetment are issues that need to be addressed.

Due to the popularity of Evanston’s beaches for both residents and nonresidents, Biggs and Stoneback said narrowing beaches rising water levels could threaten the city’s summer recreation activities. Stoneback said this could restrict summer camp programming and said the city’s “token sales” from the lakefront might decline because there will be less beach space available.

Biggs said this also stands to impact the city’s economy because less people frequenting the beaches over the summer might mean less traffic through Evanston’s businesses, calling it a “hit we wish we didn’t have to deal with.”

One possible source of funding for the city is the Public Assistance (PA) program. Kull filled out the preapplications for the PA program, which she said became an opportunity for Evanston when Gov. J.B. Pritzker declared an emergency on Feb. 6. The PA program would only cover repairs from the January storm, and would not take preventative measures.

Kull also filled out applications for the Hazard Mitigation Grant Program (HMGP), which would help the city protect the lakefront against future damages. Kull said she applied for two measures: adding sheet piling to the rock wall and adding a groin wall, designed to reduce wave effects. For the latter, she requested $8.55 million.

“I think $37 million to redo the rock wall is only one of the measures that needs to be done to really, truly protect the lakefront,” Kull said. “You’re probably looking closer to $45/46 million, and that would be with the groin wall additions. And in doing that, yes, I think it would be too costly for the city to incur, at least in the short term.”

At the Feb. 10 council meeting, Kull said the availability of funding is limited because the city is competing with other communities that have been impacted by rising water levels and shoreline erosion. Biggs said the Federal Emergency Management Agency has been clear it isn’t trying to solve lakefront erosion or high lake levels, so it is unclear what aspects, if any, of the lakefront damage will count as hazard mitigation.

While Kull said lakefront stabilization efforts are costly, she said it’s important to take action sooner rather than later. Waiting, she said, could mean more recovery efforts and greater costs later, because this problem is not going away.

“I think we’re looking at our critical infrastructure, a water plant in particular potentially being compromised,” Kull said. “And that in and of itself, could compromise half a million people.”