Approaching end of quarter, ASG introduces three resolutions on census, freedom of speech and release of report on GQNBT individuals 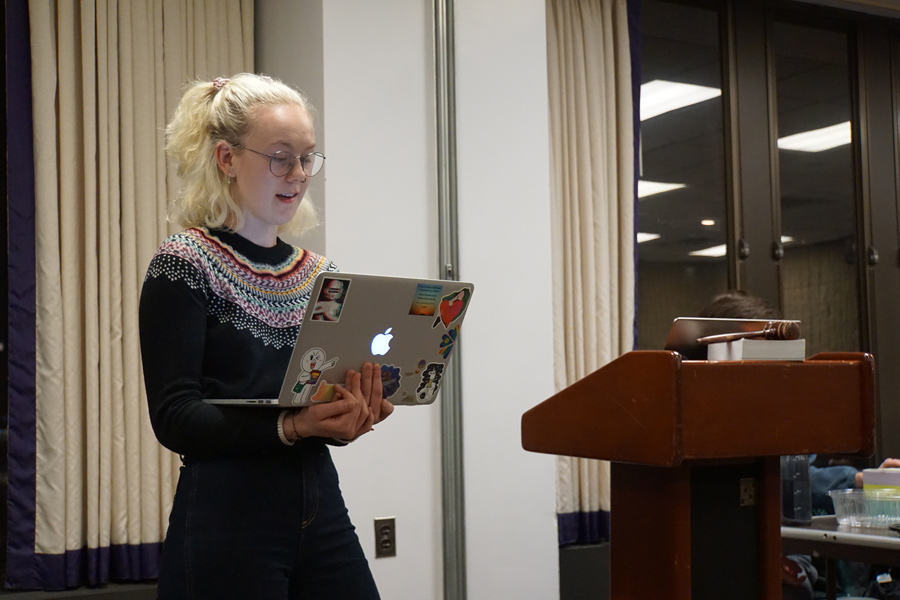 ASG’s weekly session. Senators heard two bills and voted on an emergency resolution and a previous week’s bill, passing both.

They also passed a bill, introduced by ASG parliamentarian and Weinberg sophomore Elizabeth Sperti in a Feb. 26 session, that proposed the creation of an ad hoc committee to consider establishing a one-stop advocacy office for all student concerns.

Wednesday’s session marked the Senate’s penultimate meeting of Winter Quarter. ASG officials were eager to roll out resolutions before the end of the term and elections season, which officially starts in the spring.

Weinberg junior James Crisafulli introduced a bill, supported by four Senate members, to affirm that ASG will commit to acknowledging and increasing outreach efforts toward collecting accurate information on Northwestern students for the 2020 census. It also says ASG will help students fill out census forms and fight miscommunication.

“Our biggest goal with the resolution is just that people on ASG are sort of so tapped into off-campus life and student body and different organizations,” Crisafulli said, “that we just want them to be more aware of (census collection) as an issue and being able to spread awareness about the census coming up.”

The census is a constitutionally mandated count of U.S. residents that occurs every ten years. It is particularly important for political representation of college students, because there is a misconception that they will be counted by their households, when in fact, off-campus students are responsible for counting themselves, he said.

Another resolution, authored by ASG chief of staff Henry Molnar and SESP senator Daniel Rodriguez, Bienen senator Megan Radcliffe and SESP senator Jenn Beardsley, proposes that the University establish concrete protection of freedom of speech. The lengthy set of proposals, which have been crafted by a Senate committee entitled FreeSpeechNU, chronicled recent campus incidents concerning free speech, such as the anonymous demonstration at The Rock and protests against Jeff Sessions’ visit to campus, which both occurred in Fall Quarter.

“It’s basically a really comprehensive (bill) looking at a bunch of different free speech policies at Northwestern and trying to expand those,” Molnar said.

The resolution condemns the University’s repainting of The Rock and issuance of citations, which were later dropped, to student protestors at the Sessions’ speech.

The bill proposed the University extend free speech policies to apply to The Rock. It added that the University should amend its demonstration and advertising policies to remove limitations on political expression as well as set clear policies on students’ and University employees’ conduct during a protest.

The final bill of the meeting concerned the University’s release of the report by Gender Queer, Non-binary and Transgender Task Force, which was released last month. The 82-page report details key requests, action items, desired outcomes and deadlines to improve conditions of life for GQNBT individuals at Northwestern.

Co-authored by ASG vice president Adam Davies, Rainbow Alliance senator Alyssa Peterson and three other Senate members, the resolution proposes the administration disseminate the report through a University-wide email and that it clearly states the transgender and cis-gender leads of the task force, cementing its commitment to advancing GQNBT causes.

Peterson said even though the findings in the report were important and relevant to students at NU, it was listed as the third item of the University newsletter. The University should take responsibility and take the forefront in promoting its results, Peterson said.

“Normally, a report of this scale would have been given a campus-wide all-scale email of its own separate from the newsletter,” Peterson said. “As Northwestern has demonstrated in the past, they continue to skirt from the experiences of the genderqueer nonbinary and trans student body under the rug.”

As it is an emergency resolution, which according to ASG’s laws, means that it is voted on during the same session it was introduced, the bill was passed.

The other two resolutions, which are on census collection and freedom of speech protection, will be put to a vote at the final meeting of Winter Quarter.