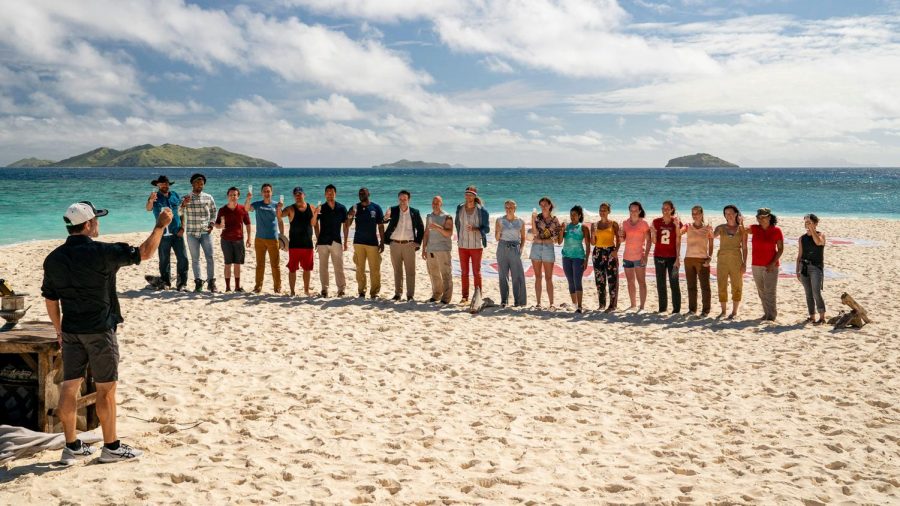 The cast of CBS’ “Survivor.” Communication senior Chase Reed brought the show to campus, and is currently filming a full season of the show.

Blindsided and ready to burn — that’s how one contestant felt after being eliminated from Northwestern’s version of the iconic reality competition franchise “Survivor.”

In fact, they felt so betrayed that they set their “buff” — a bandanna representing their tribe in the game — on fire. Looking back though, they said being voted off mostly felt bad because they’d been having so much fun.

“Survivor: Northwestern – ‘Cats Collide” began shooting with 22 participants on Jan. 17, under the direction of Communication senior Chase Reed. Filming will continue through late May, and the show is set to launch on YouTube by December 2020. The project takes the tribes, competitions and councils of “Survivor” and puts them onto Northwestern’s campus.

According to Weinberg senior and contestant Jackson Adler, the show attracted several big personalities to join and compete for the cash prize — and the pride — of becoming the “Sole Survivor.” He said he expects the mix of characters to result in a show that is both intense and humorous.

“People are definitely more action-oriented and in it to win it than trying to joke around on camera, but there are a good number of theatre majors who are putting on a show,” Adler said.

So far, challenges have ranged from physical tournaments to memory challenges and puzzles. Winners of each weekly competition are granted immunity from elimination, leaving the losing tribe to vote out one of their own.

All contestants are expected to attend challenges and film video diaries that act as confessionals. Ahead of “tribal council” meetings, Weinberg senior Jessie Serody said many participants spend a large amount of time strategizing and forming alliances to shape the game in their favor.

“Even outside of meeting people, (you’d) just be thinking about it non-stop, and there’s paranoia — are other people talking right now, am I in the right conversations?” Serody said. “It’s definitely difficult to balance having a full course load and also playing the game.”

Communication junior Paia Amelio said competing on Northwestern Survivor has given her immense respect for Survivor castaways who actually compete on an island without the option of going home, eating real food and taking a break from the game when they need to.

Still, Amelio said the Northwestern competitors are putting their heart and soul into every challenge. That’s definitely the case for Weinberg junior Carson Knoer, who pushed himself so hard during a physical challenge that he threw up when the cameras stopped rolling.

“It felt bad, but at the same time, I’d do it again,” Knoer said. “I’m a competitive person; it’s just my nature.”

Knoer said the other contestants showed genuine concern for his well-being during the experience. Although “Survivor” is a competition, Knoer said he feels like part of a community and has made connections that are “bigger than the game.”

Adler agreed that bonding over the the show has led to real off-camera friendships. Before one of the challenges, he and his fellow tribe members got together for brunch.

“It’s been really nice to meet people from all different years and schools that I never would have otherwise,” Adler said. “I definitely see myself running into (people) around campus and being excited to see them now because we’re doing ‘Survivor’ together.”

At the beginning of Spring Quarter after the halfway point of the show, the two tribes will merge and contestants will begin competing individually. Each person eliminated after the merge will join a jury that will eventually select the show’s winner.

Amelio said the many twists of the game so far have resulted in an entertaining competition viewers will enjoy. Personally, she’s looking forward to seeing some of the sillier moments of the competition, such as when she led her tribe in a dramatic dance and chant while entering a challenge.

“Being able to have this record for years later of this fun, stupid thing that I did in college is very valuable,” Amelio said. “I’m glad it’s gonna be on the Internet forever.”