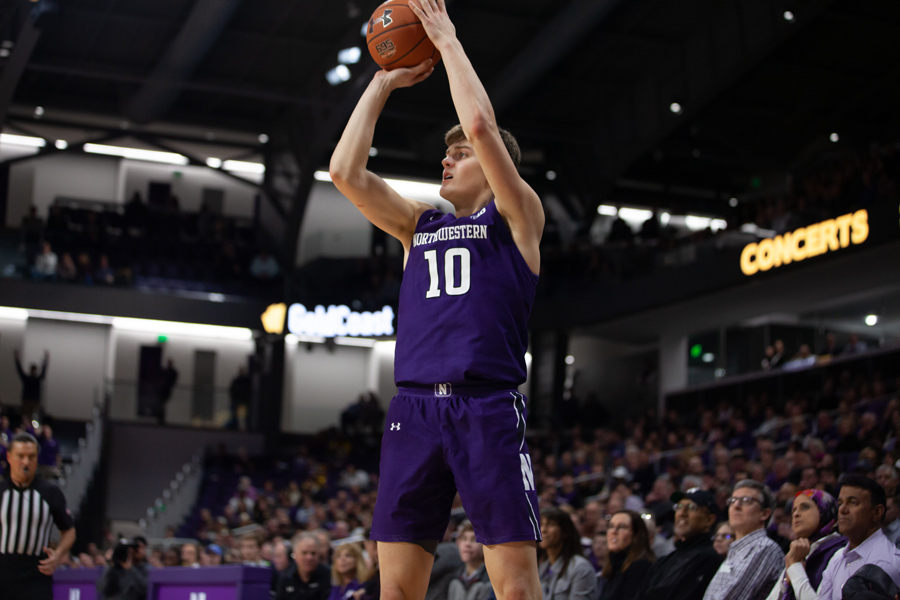 Before sophomore forward Miller Kopp became Northwestern’s leading scorer and the second-best three-point shooter in the Big Ten, he was one of the worst consistent starters in the conference.

During his freshman season, Kopp averaged 4.9 points per game and shot 31.9 percent from three-point range. Only two starters in the Big Ten averaged fewer points per game than Kopp last season.

So he created a plan to improve over the summer. Kopp would keep a journal logging every three-point shot he made to track his progress.

“Every day, there were between 300 and 400 makes from three,” Kopp said. “That’s not shots, just makes. I just got stronger and shot with conviction, knowing that if I shoot it the same way every time, it should go in.”

Kopp knew he’d have to shoot the ball well to be a successful college basketball player. Early in his high school career, Kopp told his coaches that even though he was bigger than most of his teammates, he didn’t want to be “one of those tall kids that got put on the block and forced to become a post guy.”

“He wanted to be a small forward so he could take those skills to the next level,” said Ron Crandall, Kopp’s high school coach. “There’s no separator for that other than the ability to shoot the ball.”

Kopp had a hitch in his shot until the end of his junior year of high school. Every time before he shot the ball, he would bring the ball down to his waist. So it took longer for Kopp to get the shot off, giving defenders more time to contest it.

After taking thousands of repetitions early in the morning before school and after practice, Kopp transformed his shooting form by the end of his junior season. Because Kopp became a better shooter, he set his school’s record for three-point percentage and picked up offers from Butler, Georgetown, Vanderbilt and Northwestern.

“Until Miller gets perfection, he’s not really that happy,” Crandall said. “We live in a society where we want instant gratification, but most everything in life worth having is deserved because you’ve earned it. Miller really understood that. He said if I’m going to become a great shooter, it’s going to take repetitions.”

In his sophomore season, Kopp has consistently been the team’s best player. He’s scored in double figures in 16 of his last 18 games, and he’s responsible for five of NU’s 11 20-point games this season.

Kopp may be the most improved player in the Big Ten, but he said he still has room to grow.

“I’m definitely getting a lot more attention,” Kopp said. “All the opponents know the plays run for me, and they know to take me out of the game and take away my transition threes. Because of that, I still definitely have to become a better shooter.”