Fine: Literature from a Non-Christian perspective 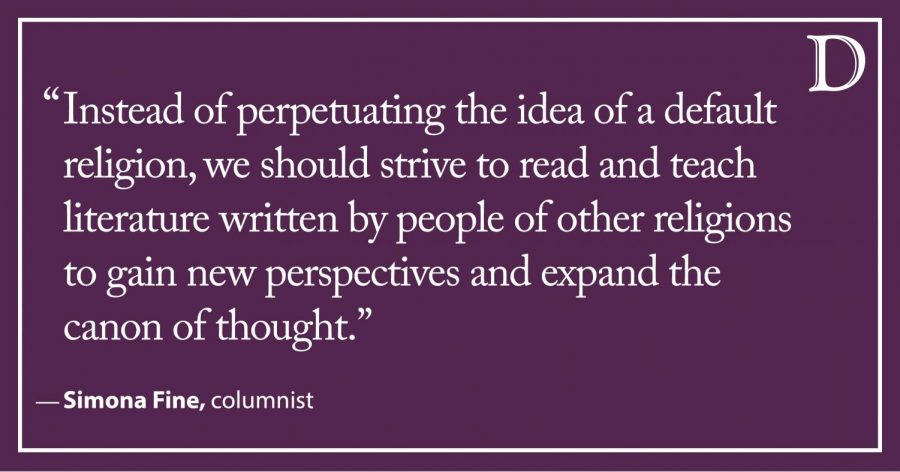 It’s the second lecture for British literature and my professor projects a list of 26 authors on the board. These writers were all featured in “The Western Canon,” as defined by literary critic Harold Bloom.

As we read over the list, my professor and classmates pointed out the lack of diversity among these revered authors. Most are white, male and wrote in English. However, there was one distinction we did not touch upon in our discussion: religion. Predictably, the vast majority of these writers practiced some form of Christianity.

Just as we cannot assume that white and male is the default, we should not assume Christian is either. Neglecting religion when considering the range of the writers we read is just as problematic as ignoring the genders or races of these authors. Religion, or one’s rejection of religion, can contribute to the context and perspective of an author and their works.

I’ve found that some professors just assume that students are familiar with the religious undertones or allusions at play in a text. For example, when I took a medieval literature class in the fall, we read “Sir Gawain and the Green Knight,” in which the titular Sir Gawain feels shame upon choosing to preserve his own life instead of willingly sacrificing himself to his opponent. When discussing this decision in class, I did not fully comprehend the guilt he was feeling after choosing to live.

All that was ringing in my ears during class was the Talmudic phrase “to save a life is to save a world” that I had learned in my many years of attending religious school and synagogue, a very different concept than the tradition of martyrs in Catholicism. In order to understand the self-reproach Gawain was experiencing, I needed to be familiar with this tenet of his religion. Although the poet who wrote the piece is an unknown figure, we were taught that he is generally thought to be a devout medieval Christian, and his beliefs clearly impacted his work and the characters he created.

It shouldn’t be rendered harder for students of one faith to analyze a text than students of another religion. When we discuss writers who are associated with specific political movements, professors generally explain the tenets of their beliefs to students. Additionally, before examining historical works, the teachings of that time are explored first to provide context. For example, as we delved into John Milton’s writings, my professor explained his perspective on relevant laws and conflicts that impacted the texts we were reading.

However, as we examined Milton’s poetry in our discussion section, my teaching assistant asked students about parables that were vaguely referenced in the work. These biblical stories had been cited but not explained in the margins of our anthology, so I was utterly confused about how these allusions furthered the overall meaning of the piece. Yet, the TA still seemed surprised when everyone was unfamiliar with the tales, providing a summary only after all the students were unable to answer.

Just as we study the intellectual environment writers worked in, we should contextualize an author’s works in their religious and spiritual beliefs, treating the writer’s religion as an external influence on their writing and not as an intrinsic element. This would enable all students and not just those fluent in Christian symbolism to gain a more comprehensive understanding of the arguments of the texts.

Both survey and upper-level classes could be studying texts of authors of non-Christian religions and delving into the contrasts between these pieces and those of Christian writers. Not only would this give all students the opportunity to learn about more belief systems and cultures, but it would demonstrate how those convictions manifest themselves in writing, just like how Christian symbolism appears and is analyzed in writing.

This summer, I visited the Franz Kafka Museum which went in depth into Franz Kafka’s biography and body of work. Exhibitions at the museum discussed how Kafka rejected Judaism at some points in his life but also went through periods of heightened interest in the religion he was raised in, both of which impacted his writings. For example, the anxiety and alienation of being Jewish in the antisemitic environment of pre-WWII Prague is reflected in the tense, nightmarish situations his characters are placed in. Without understanding this religious context, a full understanding of Kafka’s publications would be impossible.

The Northwestern Department of English currently offers a class titled “The Bible as Literature,” which strives to read and evaluate the Bible using traditional techniques of literary analysis. In addition to this class, Northwestern could provide similar classes that scrutinize the Quran or the Vedas or other influential religious texts with these methods.

As we analyze the works of Christian writers, we cannot assume that knowledge of Christianity is ubiquitous. Instead of perpetuating the idea of a default religion, we should strive to read and teach literature written by people of other religions to gain new perspectives and expand the canon of thought. There are so many excellent and influential writers of all faiths and our syllabi should reflect that.

Simona Fine is a McCormick Sophomore. She can be contacted at [email protected] If you would like to respond publicly to this op-ed, send a Letter to the Editor to [email protected] The views expressed in this piece do not necessarily reflect the views of all staff members of The Daily Northwestern.