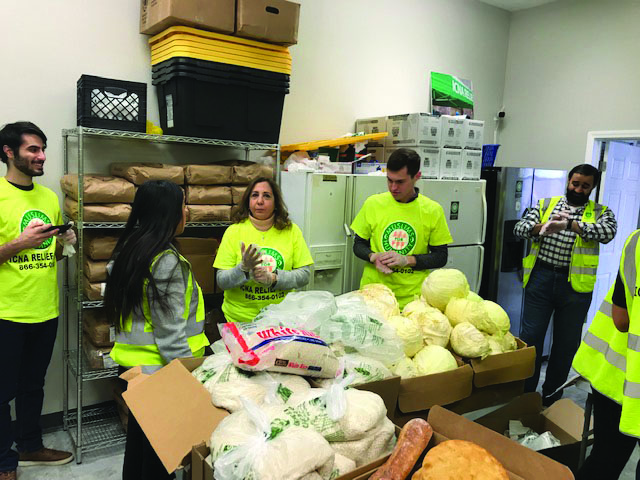 NU’s Middle Eastern and North African Languages program enabled students to volunteer at a refugee center as a way of practicing language and engaging with the community.

The students assisted the center with logistics such as registering the names of refugees, food preparation and the distribution of supplies and food. They spoke to both the refugees and the on-site personnel in Arabic when they could.

“Usually students don’t have access to the community who speak the language they’re learning,” said Middle Eastern and North African languages Prof. Rana Raddawi, who accompanied the students during their visit.

Raddawi said the use of language in context was important to language learning. She gave the example of memorizing vocabularies of different foods versus asking real Arab-speakers their preferences in a conversational exchange at the refugee center.

“With their energy, enthusiasm, politeness, this humanitarian view of them that I could see during the trip… That was very nice,” Raddawi said.

Weinberg junior Samuel Cullen bought four bags of supplies from a nearby supermarket and donated it to the center, a gift which Raddwai said exceeded all expectations.

Maher Said, a Ph.D. student from Lebanon and a teaching assistant for the MENA languages program, said helping others is a joyful experience, even when doing so in a non-financial way.

“A lot of people can’t afford donations, but there are a lot of other easy ways to help the needy,” Said said.

He said volunteering at soup kitchens, for example, is a low-effort, once a week activity that could bring a lot of positive impact to people’s lives. Growing up, he said he used to volunteer at orphanages and refugee centers in the Middle East. Helping refugees in the U.S. was an extension of his experiences, even though the refugee centers here are better off than others, Said said.

For Weinberg freshman Haruka Ichimaru, the bus ride to Rogers Park was when she first realized the disparity between her circumstances and those of the community she would engage with.

Since the trip, Ichimaru said she has reached out to nearby refugee centers hoping to continue her efforts to help fulfill the immediate needs of the community with which she hopes to remain involved.

“I don’t want that event to slip away,” Ichimaru said. “I don’t want it to just be one thing that happened on that Saturday, and just let it go.”

Many students, Raddawi said, wrote her emails after the trip asking for addresses of other refugee centers they could work with.

Raddawi said there are plans to make this trip a tradition of MENA language courses, and recommended similar programs to students learning other languages that would help them engage with their communities.