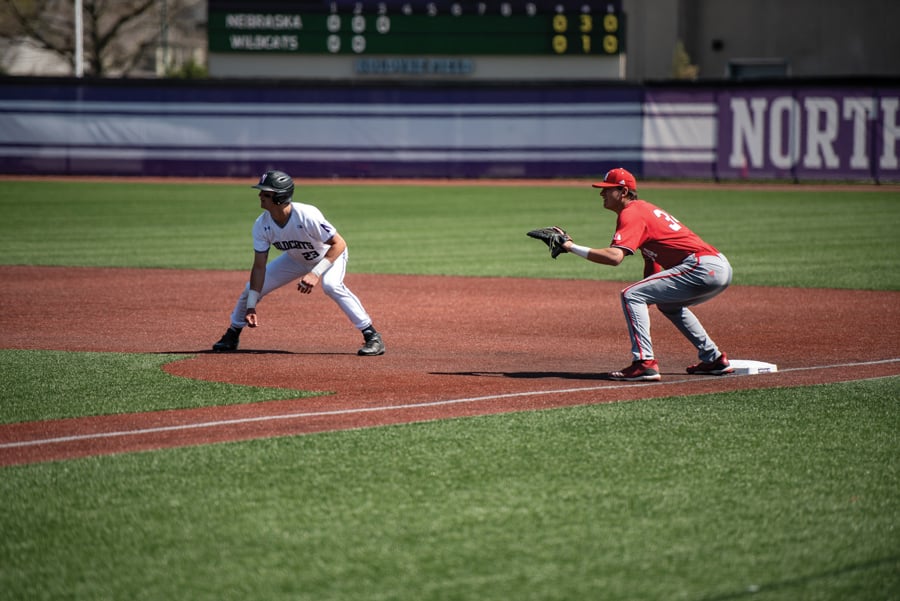 Sophomore Michael Trautwein readies on the basepath. The Cats were outscored 14-7 in their series against South Florida and lost all three games.

Despite taking early leads in their first two games of their series, the Wildcats (3-6) were swept by the Bulls (5-7) in Tampa. NU dropped a pair of one-run defeats in the series’ opening games and suffered a 10-5 rout in the series finale.

On Friday, the Cats couldn’t capitalize on five scoreless innings from sophomore Mike Dougherty and lost despite holding the Bulls without an earned run. NU’s offense scored just two batters into the game on freshman first baseman Stephen Hrustich’s single, then failed to build on their lead with just three hits and zero runs over the final nine innings. South Florida broke through in the bottom of the sixth off errors on consecutive batters and took the decisive 2-1 lead.

NU’s inability to score runners was a common theme for the rest of the night. The Cats found success at the plate and outhit South Florida 9-2, but left five runners on base and couldn’t respond to a two-run sixth inning from the Bulls.

Northwestern’s strong pitching didn’t hold for the series’ final game, as South Florida roughed up junior pitcher Quinn Lavelle with four runs over his 2.1 innings. Though the Cats rallied to tie the contest at four, the Bulls pulled away with six runs over the sixth and seventh innings and completed the series sweep with a 10-5 victory.

Though the schedule won’t show it, NU held its hosts close for much of their series. Still, the weekend proved that the Cats have work to do before Big Ten competition opens.

Over the course of the series, NU had eight errors to South Florida’s one, including two particularly damaging blunders that allowed the Bulls to take a late victory on Friday. Though the Cats’ rotation had two strong outings from its starters, their lineup struggled to drive runners in and support its staff.

NU’s next chance to end their skid comes on Tuesday against Illinois-Chicago before a weekend stretch against Western Carolina and South Carolina-Upstate.