Tekriwal: The price of peace in Afghanistan 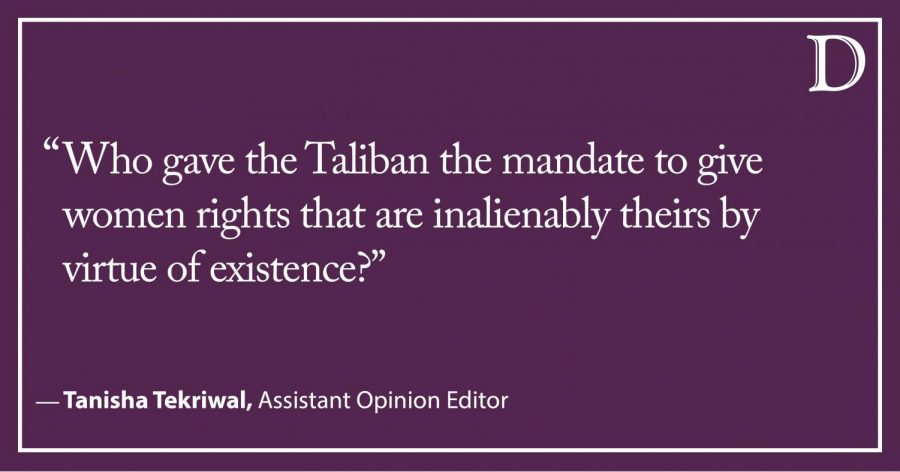 The weekend brought many important developments: two Democratic candidates shockingly dropped their presidential bids, the coronavirus spread, and the Afghanistan Peace Talks held in Doha over a period of 18 months finally concluded.

The parties involved — delegations from the United States delegation and the Taliban (the Afghan government and non-Taliban representatives were notably absent from talks) — reached some important agreements.

Included among them is the assurance of a complete and phased withdrawal of US-NATO troops from Afghanistan within the next 14 months, a Taliban pledge to sever ties with international terror outfits like al-Qaida and the Islamic State group and a prisoner exchange.

While seemingly promising, many prominent scholars and politicians are skeptical for a variety of reasons, not least because past settlements have never taken hold for long and ‘lasting peace’ for the region is a phrase often invoked and rarely realized.

One of the reservations I have about the situation is that the Taliban, infamous for their ultra-conservative policies on human rights and democratic procedure, have agreed to “grant the right to education and to work” to women so long as some “Islamic values” are upheld and the “hijab” is observed. The most obvious problem with this is the loosely-defined principle of “Islamic values.” Former member of the Afghan Parliament Fawzia Koofi rightly identified in an interview with Al Jazeera that there are different definitions of the term employed by different people.

The Taliban’s record of morphing and abusing the name of religion to their advantage and agenda is long and terrible and inflexible, and so cynicism is all but necessary for any critical examination of the agreements. Moreover, their rhetoric ignores that they do not have the sovereignty and authority to “give” rights, just like the US delegation has no say in negotiating them on behalf of an unrepresented Afghan people. Who gave the Taliban the mandate to give women rights that are inalienably theirs by virtue of existence? And who is the US government to treat women’s rights as chips to be traded for an undefined and indefinite ‘peace’?

The overwhelming excitement regarding the possibility of stability doesn’t take away from the fact that it would be a stability at a great cost, and many question whether it is one that political leaders can ask Afghan society to pay. Because a withdrawal of troops would be great for all parties as long as there isn’t a simultaneous reinstatement of the Taliban regime — even a “reformed” one.

Leaving non-Taliban Afghan actors out of the talks, especially the Afghan government, was an early mistake that, in my opinion, doomed any agreement from the very start. It normalizes and near-condones the jurisdiction of a UN-designated terrorist group over a vulnerable population already ravaged by decades of war. Even an observer status to representatives of the people would’ve done wonders for the legitimacy of the settlements the Doha talks arrived at.

Many supporters of the decisions have argued that the immediate need was the stoppage of carnage and any discussion of political power and rights would come after. While this is a noble and not entirely unfounded argument given the dire situation of Afghanistan, any peace predicated on the disenfranchising of millions is a half-peace. The counterargument here is that rights are an urban problem, a cosmopolitan issue that doesn’t concern the dying swathes in rural Afghanistan as much as an expeditious end to fighting. However, it is quite rich and belittling to assume that the poor and the rural populations don’t care about freedom of speech, women’s rights and who has administrative power over their provinces. These are the communities that need democratic infrastructures more than anyone else, because there isn’t anyone looking out for their interests in the same manner that the interests of the rich, urban and elite are preserved. Democracy was never meant to be a safeguard for the wealthy politician in an insulated space in Kabul, however many of those are even left, but for the single mother in Herat with no livelihood.

The civil war of the 1990s broke out because the talks with the mujahideen weren’t screened by representatives of Afghan civilians and advocates of women’s rights. The Taliban now cover more territory than they have since 2001. They still don’t officially recognize the Afghan government, and so the next step of intra-Afghan talks seems to be an impossible one. The domestic dichotomies are also exacerbated by the rivalry of Chief Executive Abdullah Abdullah and president-elect Ashraf Ghani, both of whom wish to undermine each other and both of which are undermined by the Taliban leaders.

Moreover, the prisoner exchange comprising 5,000 Taliban fighters to be released by the Afghan and US-NATO forces in exchange for 1,000 Afghan soldiers seems to be a healthy move on the surface. However, the release of large populations on a technically active battlefield (since no official ceasefire has been negotiated, though “reduced violence” is promised in the coming 135 days) is worrisome to any inquiring eye. A political vacuum that shall allow the Taliban to regain power in the region must be prevented at all costs to ensure that history doesn’t repeat itself. For this, a building of political and social infrastructure must be undertaken alongside an effort to give all those who have only ever known war (every Afghan under the age of 30) a taste of a civilian life unmarred by conflict.

What we must remember when we examine the Afghan arena is that this is a particular chance to repair the mistakes of the past, one that might not come again for years if mishandled. For the US, this has been an 18-year war, but for Afghanistan, it’s been a 40-year struggle against external and internal actors. Thus, though the moves are welcome to some extent, we must critically analyze how they can be reconciled to the needs of the Afghan community, and how we can avoid overlooking long-term disaster in exchange for narrow and short-sighted political gains for certain parties.

United States Secretary of State Mike Pompeo said, “Furthering the cause of peace will require serious work and sacrifice by all sides….to maintain the momentum needed to reach a comprehensive, inclusive, and durable peace.” The only needs I’ve seen sacrificed are those of the ones who have always borne the greatest brunt of the region’s conflict and hostilities and are now asked to compromise again: Afghanis.

Tanisha Tekriwal is a Weinberg Freshman. She can be contacted at [email protected] If you would like to respond publicly to this op-ed, send a Letter to the Editor to [email protected] The views expressed in this piece do not necessarily reflect the views of all staff members of The Daily Northwestern.